A group of church leaders is calling for an alternative to the proposed reorganization of The United Methodist Church's general agencies.

An international ad hoc group of laity and clergy has put together a restructuring proposal they call "UMC Plan B," combining contributions from people in 15 annual (regional) conferences in four U.S. jurisdictions and two central conferences outside the United States.

Joe Whittemore, one of the plan's architects, said the group is trying to address what it sees as shortcomings with the Call to Action Interim Operation Team's proposal to merge nine of the denomination's 13 agencies into a new Center for Connectional Mission and Ministry under a 15-member board. The Connectional Table, which coordinates the denomination's mission, ministry and resources, drafted the legislation for the Interim Operations Team plan.

"The basic elements (of Plan B) are representative governance, protection of The United Methodist Church's balance of power and structure, shared responsibility on a global basis and support for the local church and connectional opportunities to make disciples of Jesus Christ for the transformation of the world," said Whittemore, a North Georgia Conference lay leader and Connectional Table member. He was speaking to a meeting of the board of directors of the United Methodist Board of Higher Education and Ministry.

The meeting on March 15-16 included an overview of the Interim Operations Team proposal, a discussion about restructuring as well as Plan B's public debut. Plan B follows other proposed alternatives to the Interim Operations Team plan, including legislation titled "A New UM Administrative Order," submitted by the Methodist Federation for Social Action, an unofficial progressive caucus.

The 2012 General Conference, the denomination's top lawmaking body, will have final say on various restructuring proposals when it meets April 24-May 4 in Tampa, Fla.

Basic elements of Plan B

The Interim Operations Team plan is the result of the multiyear Call to Action process, which found that the status quo of a shrinking and aging U.S. church is "toxic" and unsustainable.

The Call to Action report that preceded the formation of the Interim Operations Team recommended a sustained 10-year focus on congregational vitality. It also urged the denomination to consolidate general church agencies and reconstitute them with smaller, competency-based boards.

By merging the nine agencies, Interim Operations Team leaders say, their plan will help the denomination improve its alignment and meet "the adaptive challenge" of increasing vital congregations.

"The IOT plan will reduce redundancy, and it will create more flexibility ... and a more decisive entity," Whittemore said. "However, the price is pretty high. It would cost diversity and inclusiveness, and it would delegate the decision-making powers of the general church to an elite, select 15-member board heavily influenced by the Council of Bishops."

While the Plan B proposal would consolidate some agencies and decrease the size of their boards, Whittemore said, the alternative plan would not cause the "upheaval" of the Connectional Table legislation. He said Plan B is very much in line with the Call to Action research findings.

The proposed Interim Operations Team reorganization would reduce agency boards now governed by more than 500 people to a group of 60.

The Plan B proposal would shrink the same agency boards to a group of 193, but would make fewer changes overall to the denomination's current structure.

The Interim Operations Team also has endorsed other proposals including the elimination of "security of appointment" for elders in good standing, the redistribution of up to $60 million in 2013-16 and a constitutional amendment to allow the Council of Bishops to elect one of its own as a full-time president. Plan B focuses on agency structure.

The Rev. Forbes Matonga, a Connectional Table member and director of Christian Care in Harare, Zimbabwe, is one of the consultants on Plan B. He also is vice chair of the Committee to Study the Worldwide Nature of The United Methodist Church.

He spoke at the Higher Education board meeting about his disappointment that voices from the central conferences - particularly Africa where the denomination is growing - were not included in the Call to Action research and barely present in the development of the Interim Operations Team plan.

He told the United Methodist News Service that Plan B is "a good compromise" that he thinks might resonate with African General Conference delegates, many of whom have been skeptical of the Interim Operations Team plan. "At least it gives room for representation," he said.

More than a quarter of the delegates at the 2012 General Conference will come from Africa. 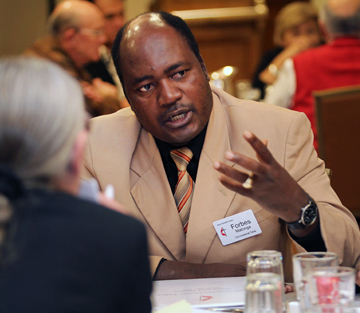 The Rev. Forbes Matonga of Zimbabwe makes a point during a meeting of the Connectional Table. A UMNS photo by Kathleen Barry.

The Rev. Robert J. Williams, top executive of the United Methodist Commission on Archives and History, said his agency is best served by its own governance because of the expertise needed in church history and archival work.

However, he also said his agency would prefer consolidation with the denomination's finance agency than absorption into the Center for Connectional Mission and Ministry. "In that, we would get lost," he said. "At least, with GCFA, we could have access to leadership and have some persons trained in the work we do. Even now, GCFA handles all our accounting and payroll functions."

Moses Kumar, the top executive of the General Council on Finance and Administration, told the news service that by maintaining the finance agency as a separate body, Plan B addresses his board's warnings about restructuring.

However, Garlinda Burton - the top executive of the Commission on the Status and Role of Women - takes a far different view.

"I think this plan is more troubling than the IOT plan because it does not get at real change," she said. "What the Call to Action surveys seem to say is that at least some people say the structure as we have it right now is not in touch with United Methodists and not connecting the dots between the local church and the general church. This new proposal has the same agencies, except you merge the commissions."

She said the plan would not save any money or address the need for agencies to provide more resources to the central conferences in Europe, the Philippines and Africa.

"It doesn't get at the passion that I saw in the Call to Action for real change," she said. "In my opinion, it gives short shrift to the issues in the church that are very real."

To be more vital, she said, the denomination needs to do more to reach people of color, reach new young adults and really engage women as leaders.

Plan B supporters still are drafting legislation for the proposal, which will be introduced at General Conference.

Among the Plan B supporters are General Conference delegates who will serve on the General Administration Legislative Committee that will be the first stop for restructuring petitions. These include Whittemore.

He said the legislation would be introduced as a substitute motion in the General Administration Legislative Committee.

Neil M. Alexander, president of the United Methodist Publishing House, and Illinois Area Bishop Gregory V. Palmer - both leaders of the Interim Operations Team - said in a joint statement that "The Call to Action is more far-reaching than any of the legislative proposals."

"After all of the 'yes, but' talk and debate of counterproposals," they told UMNS, "what we need most is for (The United Methodist Church) to stay intently focused for at least a decade on creating more vital congregations, assure genuine and sustained alignment in that effort from all parts of the connection and provide for greater accountability for both lay and ordained leaders."