For hours on end, she bends over, wrestling small potatoes from the stubborn earth. She is anxious over the disappointing price this first crop will bring, but she focuses instead on how it will be better next year now that she has experience.

She goes home from the potato field to a tiny house where she washes her clothes in buckets and cooks over a fire fueled with charcoal made by people in Uhekule village in Tanzania.

Awaiting her are the children, the orphans around whom Kay Oursler is building a better future.

Oursler could have had retired comfortably back in Hot Springs Village, Ark., near her biological children and grandchildren.

But retirement would not be much of a mission for Kay Oursler, certainly not like starting an orphanage in a small African village.

"People ask me sometimes, 'Do you think you are making a difference, Kay?'" Everything about Oursler conveys strength and purpose, but her voice cracks as she considers the question. "I think I am; I hope I am. I've given six years of my life to (Uhekule) village. If I get sick, I'll have to come home, but for right now, I still have energy; I still have challenges; and I still have lots of work to do." 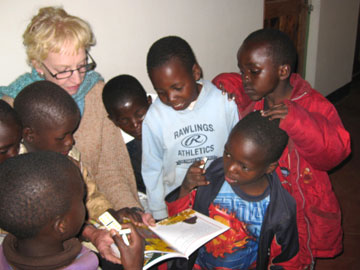 Kay Oursler followed a calling to leave her home
in Arkansas to build an orphanage in Tanzania.
UMNS web-only photos courtesy of Kay Oursler.


When her marriage of 46 years dissolved, Oursler faced starting over by joining the Peace Corps, something she thought about as a young woman. When her service in the Peace Corps ended, Oursler was not ready to go home. And her notion of where "home" actually was had changed.

"The pivotal point&ellipsis was the day I went to town and saw a little boy who I knew selling onions, and I asked why he wasn't in school," she said.

The boy's mother had died. He was one of the many bush kids with whom Oursler was familiar. These children were orphaned by parents who died of AIDS.

'This is a calling'

"At that moment I felt, 'This is a calling.' This is something I needed to do, no matter what, build an orphanage in my village for all these little kids who have no parents," Oursler said.

Bibi means grandmother, a revered distinction in a place where the average life span is less than 50 years.

Bibi Kay, as she is known in Uhekule, approached village elders with her idea. The elders pledged a hundred acres for an orphanage though there were doubts that this aged American woman, who hardly spoke the language, could accomplish such a thing when there was no money, no facility and no precedent.

"I never had any doubts I could do this," Oursler said. "I just wasn't sure how to get started." 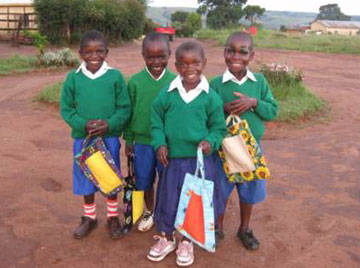 Oursler has established a school
for the children in the orphanage.

However, Oursler said, she felt she was being guided by God and her faith.

"I just had guidance all the way through. It's hard for me to explain it&ellipsis I put everything I've got into a project. I eat, sleep and dream about it," she said.

She went back to Hot Springs Village in 2008, and began raising money, starting with her own church, Christ of the Hills United Methodist.

The Rev. Walter "Bubba" Smith, the church's senior pastor, marvels at the example Oursler sets for people who feel they are too old to accomplish what may be in their hearts. "Kay has not only the heart, but Kay has the ability to draw others into her vision, and to get them to support what she's doing," he said.

Oursler designed an orphanage complex, found a retired architect to create blueprints and took those plans back to Africa. The villagers made 90,000 bricks, and construction began.

Oursler returned to the United States periodically to talk to church and civic groups. A woman in Little Rock donated a tractor to help the orphanage move toward self-sustainability in raising crops and livestock. A man in California donated a solar power installation. Finally, the first orphans moved into The Sunrise Childrens Home of Uhekule Village in May 2011.

Ten children live there now - the first time in their lives they know where their next meal is coming from. They love the donated books in the Bibi Kay library, and they are in school. The orphanage has space for up to 60 children, but more revenue is needed to provide staff to expand. As always, Oursler moves forward, driven by that question her friends back in America ask, and by changes she now sees in the first orphans who came in. 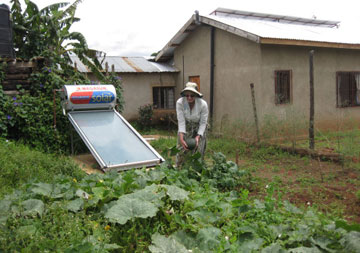 Oursler has introduced organic gardening methods
and solar energy to her complex in Tanzania.

"They were malnourished, their clothes were raggedy. &ellipsis Now, they're so happy, they're getting three meals a day&ellipsis they've got shoes&ellipsisand they even look different now. They have a glow about their skin, their eyes are just sharp as can be and they're happy kids."

Bibi Kay is making a difference. And not just for the orphans. Oursler said she notices many villagers have adjusted their own expectations for children of Uhekule village. They speak of education beyond primary school and the potential productivity of organic farming methods that Oursler is working to establish along with a fish-farming operation.

Bibi Kay's lack of patience may be her greatest strength.

*Galin is a freelance producer based in Nashville, Tenn.

Children orphaned because of AIDS