By the time Mollie and John Moore had reached their mid-50s, pre-retirement life was looking great. Both were winding down busy careers and had a lot of freedom to do what John refers to as "run around."

They enjoyed weekend getaways to visit family, trips to watch the University of Tennessee play ball and regular invitations to join friends at local baseball games in their hometown of Memphis, Tenn. Life for the couple, who had raised four children, was good.

Then in August 1990, the course of their lives changed. One of their children - daughter Lisa - died in a car accident. Lisa's life was complicated. Divorced once and in an abusive second marriage, she left behind two young sons, Joshua, 7, and Patrick, 6.

"There was never a question as to who would have the boys," Mollie said. "They were happy to live with us because for a long time, we had been their safe haven."

"We just wanted them as close as they possibly could be," added John. "We wanted to be there for them always."

With that decision, the Moores became an example of a growing national statistic: grandparents raising grandchildren. According to AARP, across the United States, more than 2.5 million grandparents are taking on responsibility for their children's children. One million of these children live in homes where the grandparent is the householder and neither parent is present in the home. They are part of a "grandfamily."

The Moores rarely use the word "sacrifice" to describe the choice they made. They are more comfortable with just calling it a "change."

"I guess I'm just an old farm boy that was raised up kind of fat, dumb and happy," said John. "Life is just whatever comes our way. You really can't detour it. You just do the best you can with what you've got and pray that that's enough."

'It was a blessing'

"But life did change after the boys came," Mollie admitted. "It was hard for our friends because nobody wanted little kids around. Most of them had already been there and it was hard for them to do what we were back to doing &ellipsis scouts, soccer practice, little league baseball games, PTA meetings and stuff like that."

Keeping things normal was a priority for the Moores. They sold their longtime home and moved into a different neighborhood so the boys would feel that it was their house, not Grandma and Grandpa's house.

"It always felt normal to me," said Patrick Ulrich, now 28 and a full-time dad living in St. Louis. "It was a blessing.

"You watch TV shows and see the family eating dinner together and talking about their day and that's what we had. Other than my mom being alive, I couldn't think of things being any better." 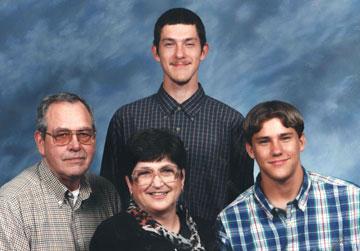 Mollie and John Moore raised their grandsons Joshua (rear) and Patrick after their daughter died. Photo courtesy of the Moore family.

His two daughters now benefit from his nontraditional upbringing.

"Every Saturday, my grandfather would wake me up by vacuuming the hallway," Patrick laughed. "Then he'd leave the vacuum out for me to do my room. I'd have to help him cut the grass and do yard work. One time we planted sunflowers. When you are a kid, you just think 'why do I have to do this?' but when you're an adult, you appreciate it. Now it helps me with my own kids. Everything my grandparents taught me has stuck with me."

"I wouldn't be the man I am today without their moral and worldly guidance," he said. Joshua is a Marine stationed in Cherry Point, N.C. He's also the father of a young son and 2-month-old twin daughters.

Joshua calls his grandmother the "rock of the family."

"No matter what was happening, she was always the calm, cool and collected person," he said. "I'm sure she may have been just as nervous as the rest of us, but her composure always gave me confidence in anything I was doing. Ultimately, she was the person I wanted to please and take care of."

What's the most important gift a parent or grandparent can give a child?

"Time," said John. "Sometimes you don't have time, but you try to work it out to where you do what you can with your child, whether it's your daughter or son. Even if you're just hauling junk, you take your child with you. You include them in things. You make those special trips here and there - camping, hiking in the woods, whatever - just so you do things together."

Grandparents thrown back into the parenting game face many challenges, including feeling isolated from their own peers, having to manage the psychological needs of children who have been hurt by a parent's absence, re-setting up a child-friendly household, bridging the generation gap, practicing positive discipline practices and more.

Luckily the couple found an oasis in their church - Crossroads United Methodist. People were willing to listen. Active in United Methodist Women and close to preacher John Holt and his wife, Robbie, Mollie credits those friendships with getting her through.

"They understood," she said. "Not like a lot of people who would kind of look at us funny when we did or said something about the kids that they couldn't relate to. Some seemed surprised that we just couldn't let go of our responsibilities, but we stayed with the kids because that's what they needed. That's what parents do."

Holt, who now serves Raleigh and Scenic Hills United Methodist churches in Memphis, said it was a matter of accepting the Moores where they were.

"We went through the teenage years with them," he said. "We went through confirmations and graduations. We did it all because we were family and that's what the church is, or should be - family."

"We just left everything up to God," Mollie offered. "You just have to know he's not gonna give you anything you can't handle."

John agreed. "That's it. Put it in God's hands and it will work out."