A former Mississippi pastor who is committed to engaging United Methodists in hands-on mission took office May 7 as president of the denomination's Council of Bishops.

Bishop Gregory Palmer, outgoing leader, handed the presidential gavel over to Bishop Larry Goodpaster with the words, "May you direct and assist us in the building up of God's work."

Goodpaster, spiritual leader of the Charlotte (N.C.) Area, promised to fulfill the office "for the glory of God and for the transformation of the world."

Following the installation service, United Methodist bishops stood and applauded while Palmer embraced Goodpaster. Palmer, leader of the Illinois Area, had served as president since 2008.

"He is a man with solid gospel presence and great integrity in all the work he does," she said. "He engages everyone with whom he works."

The council comprises The United Methodist Church's top clergy leaders, who guide the 11.5 million-member denomination in Africa, Europe, Asia and the United States.

In an interview, Goodpaster said he is ready to assume the office.

Goodpaster received his bachelor's degree from United Methodist-related Millsaps College in Jackson, Miss., in 1970 and was ordained deacon in 1971 and elder in 1974. 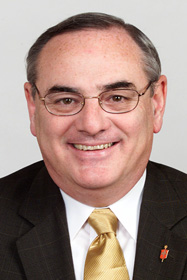 He served several Mississippi churches while earning a doctorate from Candler School of Theology in 1982. He has served a five-church rural charge, a new congregation and several large-membership churches.

During his two-year term, the new president will face several issues, including an effort to establish structures that more fully reflect the growth of the church overseas and efforts to revive a declining and graying membership in the United States.

As Palmer's successor, Goodpaster said he wants to play a role in bringing the church together in mission. In particular, the bishop said, he wants to embed the denomination's four areas of focus (leadership development, congregational growth, global health and ministry with people in poverty) into the life of the church.

As part of that effort, he wants to continue informal conversations among several groups looking at the church's future, including the Call to Action Committee, the Connectional Table and the Committee to Study the Worldwide Nature of The United Methodist Church. All of these groups, along with the Council of Bishops, need to be sure they are working together, said Goodpaster, author of the 2008 book "There's Power in the Connection."

In a rapidly changing world, there is a special challenge in finding ways to serve the church in a timely way between the General Conference gatherings, which occur every four years. Shortly after the 2008 legislative assembly approved the four-year budget, the economy soured. The budget crisis that followed showed the need for the church "to be able to respond quickly," Goodpaster said.

Amid its challenges, there are signs of new life throughout the denomination, Goodpaster said. 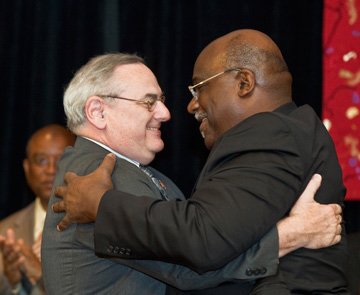 Bishops Goodpaster and Palmer embrace following the passing of the gavel. A UMNS photo by James D. DeCamp.

He sees it in his own conference, which plans to start eight churches this summer. In addition, he sees it throughout the church in Southeast Asia, which continues to grow despite many challenges.

"There is a certain amount of excitement and passion about extending the gospel from village to village, from neighborhood to neighborhood," Goodpaster said.

When the going gets hard, he said, church members in Vietnam, Laos and Cambodia have the attitude, "We're going to trust God to get us through this."

It is also Goodpaster's attitude as he assumes the presidency of the Council of Bishops.

"God's grace is bigger than any of us and always sufficient," Goodpaster said. "That's what I'm going to rely on."