“I lost my house, my car,” said Olivares, who moved to the U.S. from Cuba a year ago and now serves as associate pastor and Hispanic ministries director at First United Methodist Church in Pasadena, Texas, near Houston.

Since getting flooded out a few weeks ago, he and his family have been living with his parents — eight people in a small apartment.

Olivares is committed to moving to larger quarters, and fast, but this week and last he’s put that on hold to study theology in Spanish at Perkins School of Theology. 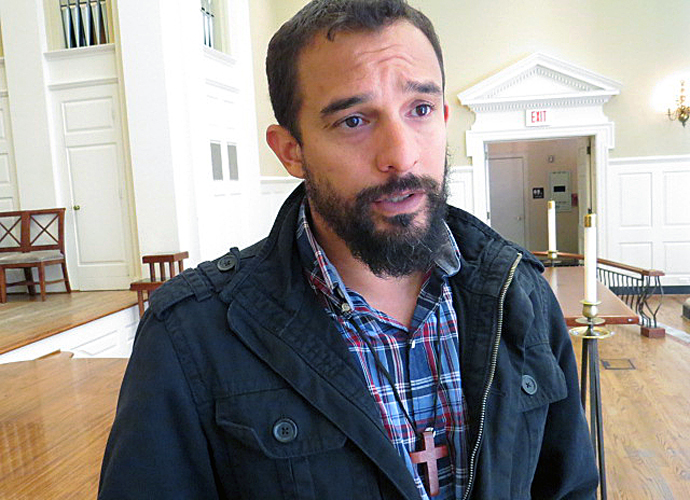 Jonathan Sanchez talks about how meaningful it has been to him to be able to study advanced theology in Spanish at Perkins School of Theology in Dallas. Perkins is the first United Methodist seminary to offer a Th.M. degree in that language. Photo by Sam Hodges, UMNS.

“I was excited, and when they told me it was in Spanish, then I was super excited because then I could really understand the readings and get a much better education,” he said.

Perkins, part of Southern Methodist University in Dallas, has this term begun a program that leads to a Th.M., or advanced theology degree, in Spanish. Perkins officials say it’s a first for a United Methodist seminary, and staff at the United Methodist Board of Higher Education and Ministry said they knew of no precedent with that particular degree.

Funded by a grant from the Henry Luce Foundation, the program is allowing eight native Spanish speakers who already have a master of divinity or master of theological studies degree to go further in their studies.

“They’re thirsty to go to the next level, and it’s much easier for them to do this study in their own language,” said the Rev. Isabel Docampo, director of Perkins’ Center for the Study of Latino/a Christianity and Religions.

For most of the term, the students are in their respective hometowns, doing assigned readings and writing papers. But they’re currently on campus for intensive classroom work with professors who speak Spanish fluently.

Students are here from Brazil, Argentina and Mexico. Other students live in the U.S. but grew up in Spanish-speaking countries.

Along with being conducted in Spanish, the program assigns books by theologians who write in Spanish, such as Gustavo Gutiérrez and Jon Sobrino. It also emphasizes the religious life of Hispanic and indigenous peoples in Latin America.

“We have the opportunity to study in our own language our own theologians, our own heritage, our own history,” Jonathan Sanchez said.

Sanchez is a Venezuela native who lives in Orlando, Florida, and serves as lay leader of Faith United Methodist Church there. His pastor, the Rev. Matt Findley, has seen Sanchez’ commitment to the church and to volunteering, including operating a financial literacy website for teens and young adults.

Findley is excited that Sanchez, who has extensive experience in youth ministry and studied at Asbury Theological Seminary, is getting to do the Perkins program.

“The sacrifice he’s making to see it happen is huge, taking time off of work, and everything else,” Findley said.

Fernanda Casar, who teaches at Seminario Metodista Juan Wesley in Monterrey, Mexico, also is part of the program. With the other students, she’s taking a course in Latin American liberation theology, taught by the Rev. Harold Recinos of Perkins.

She said her longstanding passion for justice work, including for the poor and women, is getting the theoretical underpinning it needs. 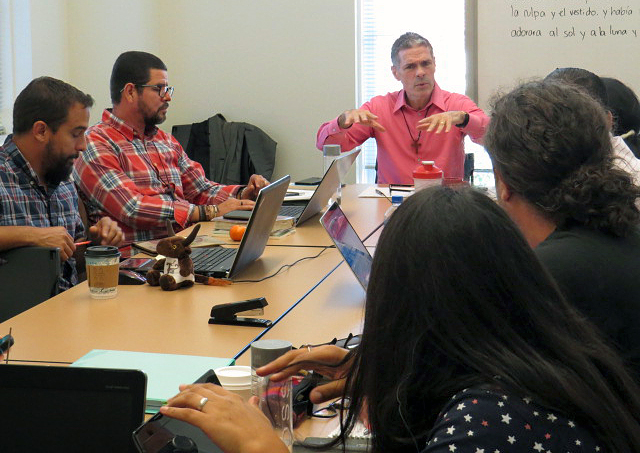 The Rev. Harold Recinos, a professor at Perkins School of Theology, leads discussion in a class on Latin American liberation theology. The students are part of an advanced theology degree program Perkins is offering in Spanish, a first for a United Methodist seminary. Photo by Sam Hodges, UMNS.

One day last week, Recinos and the students — all equipped with laptops, and most with coffee, tea or water bottles — sat around a classroom table, engaging in spirited discussion about the work of Sobrino.

It could have been any high-level seminar at Perkins, only the discussion (and the writing on the chalk and white boards) was in Spanish.

Recinos summed up the course’s emphasis as “the notion of bringing good news to the bad news situation of the broken condition of the people most in need, which I refer to as crucified people.”

He added: “Everyone’s sharing and speaking out of that perspective. It’s very enriching.”

The Th.M. students led chapel at Perkins on Oct. 12, and also have visited predominately Hispanic United Methodist churches in the Dallas area.

Docampo described the program as a one-time event that will extend over two years, with students graduating in May 2019.

She’s pleased by the friendships that have formed already among the students, and by some of the guest professors who have been lined up for future terms, including Mayra Rivera of Harvard Divinity School.

And she’s moved that even Hurricane Harvey couldn’t keep one of the students away.

“That almost made me cry,” Docampo said.