I’ve heard people describe miracles like a lightning bolt, instant, dramatic, so stunning you blink not sure what you saw, but that has not been my experience. In the hours after our son was born, he suffered a massive stroke that paralyzed his entire right side. It was five days before he was even stable enough for the doctors to run all the necessary tests to determine what had happened, and once they knew, the prognosis was dire.

Standing in a hospital alcove, the doctor shared that our little Lukas would likely never walk or talk and that he would be significantly impaired. We chose not to believe that and instead prayed that God could somehow heal him. I admit that the healing I prayed for in those first horrible days is not what we have seen. I wanted that instant, lightning bolt kind of change. But what we have received over these past twelve years is more like a gentle rain, steady, restorative and sometimes messy.

Against all odds, Lukas continued to improve--well behind the expected timelines for childhood development and not without countless therapies and intervention, but he made progress. It was then that we had another setback: the damage caused by the stroke had created a seizure disorder that continued to escalate and couldn’t be controlled by medicines. We were faced with the choice of a radical brain surgery in an attempt to control the seizures or watching the seizures slowly drain his life over the next several years. We continued to pray, and entrusted him to the neurosurgeon for what was the hardest decision we ever had to make as parents.  That was ten years ago today. We were weeks in the hospital, but were released to take him home days before Easter. This time of year always when we celebrate Jesus’ power over death, I am reminded too of the rebirth Lukas experienced.

He started to talk, eventually he began to scoot around. When he was almost four years old, he finally pulled himself to standing on Christmas morning and we were ecstatic. As he slowly gained skills, language and mobility, he also grew a remarkable spirit. He has an astounding capacity to love and to empathize. When he was four and just barely walking independently, he got away from me at a friend’s wedding. It took me a few minutes to weave my way through the people to reach him and when I did, I found him leaning against a woman we didn’t know, his one good arm wrapped around hers and his head resting on her. She had tears streaming down her face. I didn’t know what to say and through her tears she said, “I was just sitting here feeling completely alone in this crowded room when this child came out of nowhere and took my hand and hugged me.” God surprises us. He sent her someone to remind her of His love. I looked at her tears and I knew it, because He had done the same for us. Through every step of our journey, friends (and sometimes strangers) were there, making His love tangible. 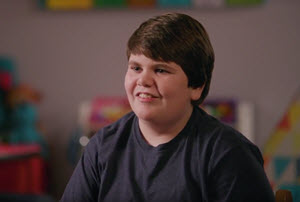 Lukas is now in the 5th grade. He walks with a limp, has limited use of his right arm, and lives with chronic pain, but he is also holding his own in school, has lots of friends and is endlessly funny and creative.

Recently, Lukas got to be part of a project where we interviewed children and asked them about their faith and what they believed. When we asked Lukas what a miracle is, he responded, “God surprises us.” He is so right. I will never understand why he has had to suffer through all the challenges that have filled his short life, or why others haven’t experienced the healing that he has. I have more questions than answers, but I have seen God’s love shine through him. I see his joy, and I have come to learn that the miracle is not in the moment, it is in the relationship. Raising Lukas has shown me that miracles are everywhere, constantly reminding of God’s unending love.

Jennifer Rodia is a wife, mother and friend actively seeking ways to remind the world of God’s love. She also serves as the Chief Communications Officer at United Methodist Communications.