The desire to make sure Hurricane Harvey relief teams had enough water last week provided timely help for the thirsty town of Beaumont, Texas, where floodwaters shut down the water system.

What happened goes past coincidence into “Oh. This is one of those God moments," said the Rev. Scott Moore, the director of missional excellence for the Texas Conference of The United Methodist Church.

Moore recounted some of the “God moments” that enabled his relief-effort to get water to Beaumont to be accomplished.

A phone call from a friend in West Texas began what would be three days of Moore and his colleagues watching as obstacle after obstacle went away to enable the pallets of water to be loaded Sept. 1 onto Army Reserve Blackhawk helicopters bound for Beaumont.

Moore’s friend, E. C. Ice is a licensed local pastor who has roots in Conroe. But Ice was in Hamlin, more than 400 miles northwest of Moore’s location at the Mission Center, the newest depot in the UMCOR relief network. 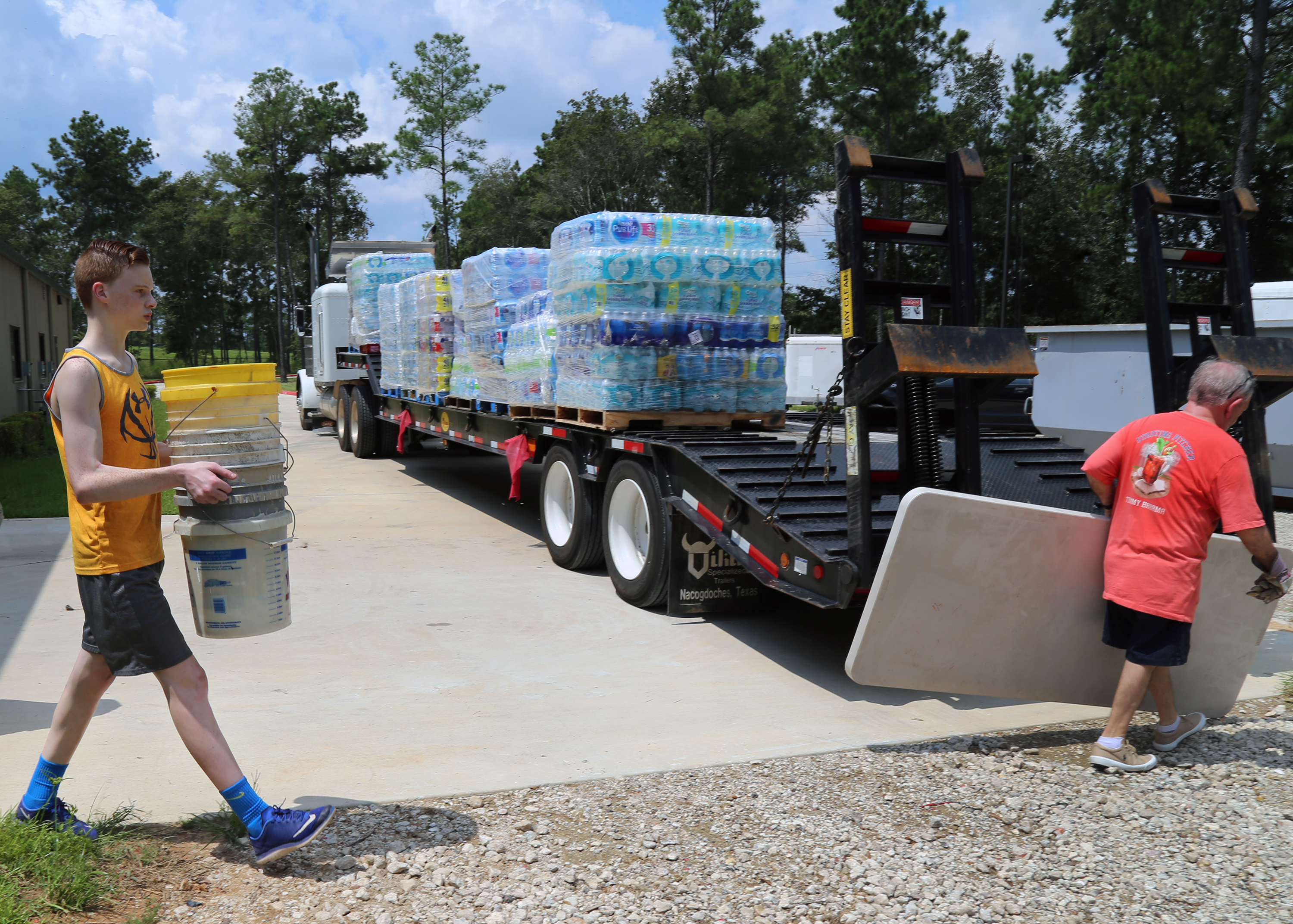 Volunteers carry a bucket and a table during efforts by the Texas Conference to help provide water for Hurricane Harvey relief teams in Conroe, Texas, after floodwaters shut down the town’s water system. Photo by Brant Mills, courtesy of the Texas Conference.

“He (Ice) originally said he wanted to load a 16-foot trailer with water and bring it to me,” Moore wrote in a Facebook account that was shared by Houston Area Bishop Scott Jones on his own Facebook page. “I thought it would be good to have some on hand to send out with our volunteer teams, so I told E.C. to bring the water.

“He called me Wednesday (Aug. 30) and said that his water drive had gotten out of hand, and he now needed an 18-wheeler to deliver the water. Not wanting to discourage him, I told him to bring the truck. Thursday afternoon he brought in a truck with 20 pallets of water (roughly 700 cases, 50,000 pounds).

“That same afternoon, an entire troop of Boy Scouts showed up at the Mission Center to volunteer. We had no idea they were coming. We didn't even know how they knew who or where we were. But, never ones to turn away good help, we put them to work. The kids verified hygiene kits while some of the adults helped unload the water.”

“I fretted all Thursday night wondering what I would do with 20 pallets of water taking up space in the warehouse,” Moore said in his post. On the morning of Sept. 1, he learned the water system in Beaumont, about 120 miles away, was down and 115,000 people were without drinking water.

Moore said he knew getting from Conroe to Beaumont would be tough because major highways were closed. He had a volunteer driver, so he began a search for a truck big enough to haul enough water to make a difference. No luck.

Moore then considered a commercial trucking company. Again, no luck.

Then Moore learned Beaumont had announced a location and time for water distribution, but cancelled because FEMA could not figure a way into Beaumont.

At that point, Moore said, he realized the only way to get that water to Beaumont was by helicopter.

“But, where am I, a lowly Methodist pastor going to get a helicopter?” he asked.

“As I reached the end of my waterborne sanity, who should walk into the Mission Center but the Boy Scout leader from Thursday,” Moore recalled. The Scout leader asked if Moore still had the water and Moore responded by asking if he knew anyone who needed it.

The Scout leader explained the boys were working with a Roman Catholic church that had been asked to find water to put on Army Reserve Blackhawk helicopters to fly into Beaumont.

“’You think they could have some of yours?’" Moore said the Scout leader asked.

Thirty minutes later, a flatbed 18-wheeler arrived at the Mission Center. Fourteen pallets of water were loaded onto the truck for the North Houston Regional Airport in Conroe, then transferred to the helicopters.

As of Sept. 5, Moore said the Texas Conference had handed out about 2,900 cleaning kits, 1,500 hygiene kits and 50,000 pounds of water. Two Emergency Response Trailers are also in the Houston area. As of Sept. 4, water had been restored to most of Beaumont.

“We are meeting the needs as efficiently as we can,” Moore said. “There are more needs than anyone has resources. With the full weight of all governmental agencies and non-profit response organizations there will still be unmet needs.  This disaster is larger than anything anyone has ever responded to before.”

Moore explained that some of the people they had met contacted them for a flight on a Commemorative Air Force DC-3 on Sept. 4.

“We were able to fly cleaning kits and hygiene kits in to Orange, Texas, which was otherwise not accessible,” Moore said. “The way that so many partners have come together and shared resources is amazing.”

Moore said that in 2005 the Tzu Chi Taiwanese Buddhist Foundation donated a generator after Hurricane Rita in Beaumont.

“Yesterday, I was able to return the favor through the generosity of United Methodists and provide much-needed cleaning kits and hygiene kits back to Tzu Chi for distribution is some areas they were working in,” Moore said.

“It was amazing to see God's love and generosity come full circle. God is good.”