First came water, in the form of flooding rains from Hurricane Florence. Then came fire, and a good fire it was.

A nearly full house at Clarks United Methodist Church, on the outskirts of New Bern, North Carolina, looked on as the paid-off mortgage on their four-year-old sanctuary burned to a crisp as part of a ceremony in worship on Sept. 23.

Bishop Hope Morgan Ward, who had to negotiate detours from flooded out roads to get there, followed up with a post-storm sermon of encouragement, drawing on Psalm 84.

“What a mission we have at this moment. … Together we are about to go from strength to strength,” preached Ward, who leads the North Carolina Conference.

This was homecoming at Clarks, and Ward’s visit is believed to be the first by a bishop to this church, which was established in 1905.

North Carolina Conference Bishop Hope Morgan Ward stands by as members of Clarks United Methodist Church burn a paid-off mortgage on the sanctuary. The September 23 worship service also was a homecoming for the New Bern, North Carolina, church, and gave members a chance to be together after days of coping with post-storm flooding from Hurricane Florence. Photo by Sam Hodges, UMNS.

Lifelong member Terry Wethington was among those in a blessing-counting mood, despite being flooded out and having to take shelter with his parents.

“It’s a humbling feeling, throwing all your possessions out by the road,” he said. “But I will be able to fix my home. We’ve got the carpets and floorboards up already.”

Even for a region on a first-name basis with a handful of hurricanes, Florence has proved memorable and costly.

The storm’s death toll in the Carolinas and Virginia was at least 44, with billions in property damage projected. And though Florence came ashore on Sept. 14, rivers were still cresting in certain locations almost 10 days later.

“Each storm is unique, the way it impacts people, the way it comes in and goes out,” Ward said after the service. “This one is unique in that we’ve been in the emergency phase for more than a week.”

The historic community of New Bern, which is at the confluence of the Neuse and Trent rivers, is functioning more-or-less normally but still has saturated debris piled high along some of its downtown streets.

Ward ticked off other hard-hit areas, including ones that saw extensive flooding from Hurricane Matthew in 2016.

She estimated that 50 North Carolina Conference churches have flood damage.

“Three pastors we know of have lost their homes, and we’ve got parsonages under water,” Ward said.

In the conference’s Sound District, which includes New Bern, 21 churches and four parsonages were flooded.

“There’s damage all across our district,” said the Rev. Linda Taylor, superintendent. “In Bridgeton, not far from here, they say it looks like a bomb has exploded.” 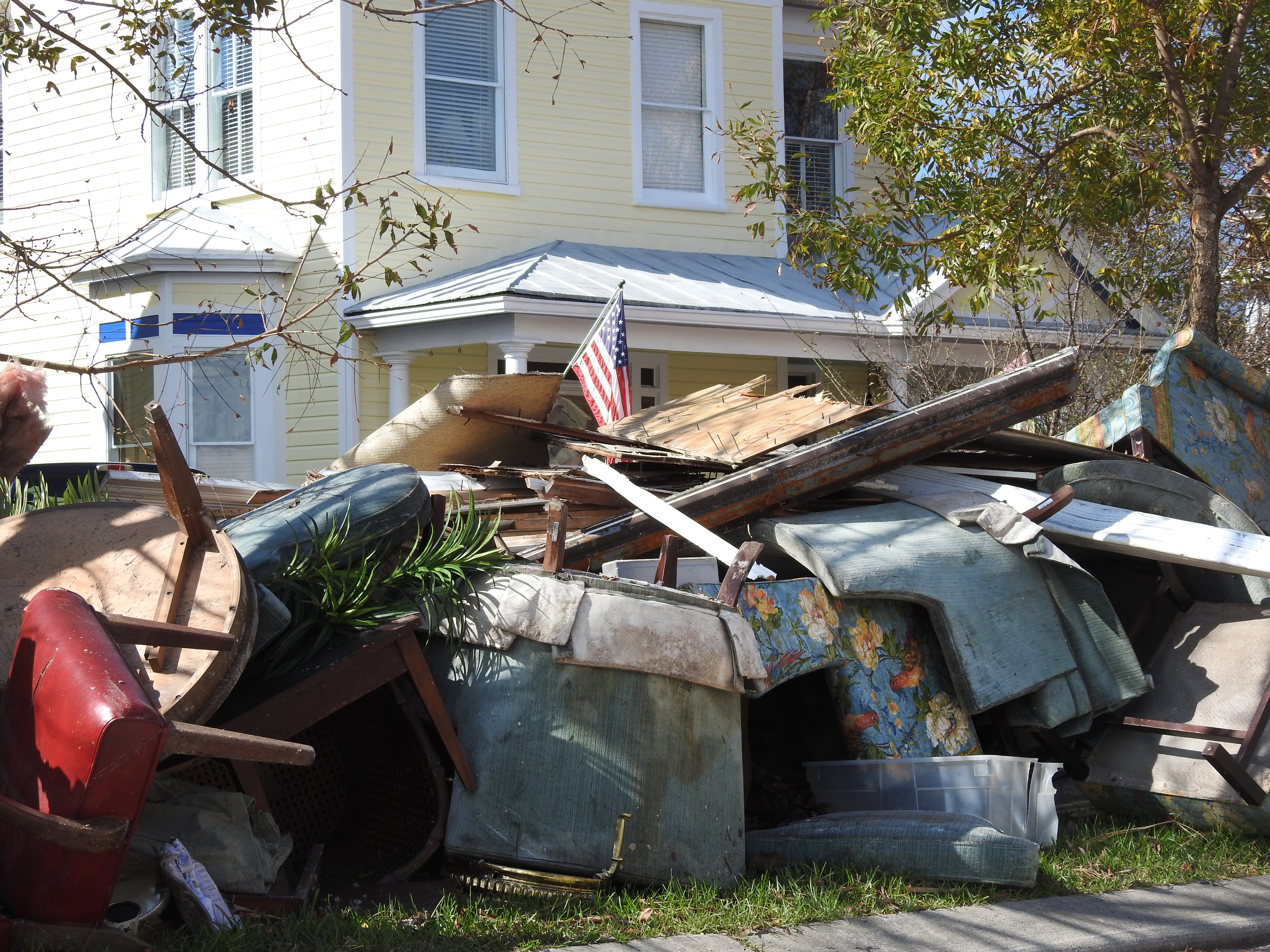 The storm’s impact was touched on in both the children’s sermon and joys and concerns period of Clarks homecoming service. Church members, some tearful, asked prayers for family members and friends who had lost homes.

Much of the talk afterward, though, was of close calls.

Frankie Parker left his home at 2:30 a.m. as waters began to rise nearby.

“It came within eight inches of flooding everything,” he said, noting his only losses were garage items.

Taylor thought her Wilmington, North Carolina, home was too far inland to be a serious flood risk, but then she and family members heard frogs croaking on the night of Sept. 14. They checked and found water covering the street and rising.

After moving to safety all the first-floor items they could, they retreated to an upper floor.

“We spent the night praying,” she said. “My Fitbit said I got an hour of sleep, but I don’t remember it.

Taylor thought the morning would reveal a flooded first floor, but the waters had receded just short of her home.

“We never lost (electric) current,” the pastor said, adding that neighbors who did took shelter at the church, some staying several days.

Other United Methodist churches have served as shelters, including Unidos Por Cristo/United in Christ United Methodist Church near Greenville, North Carolina, which took in several Hispanic families living in trailers that were threatened by the storm, Taylor said. 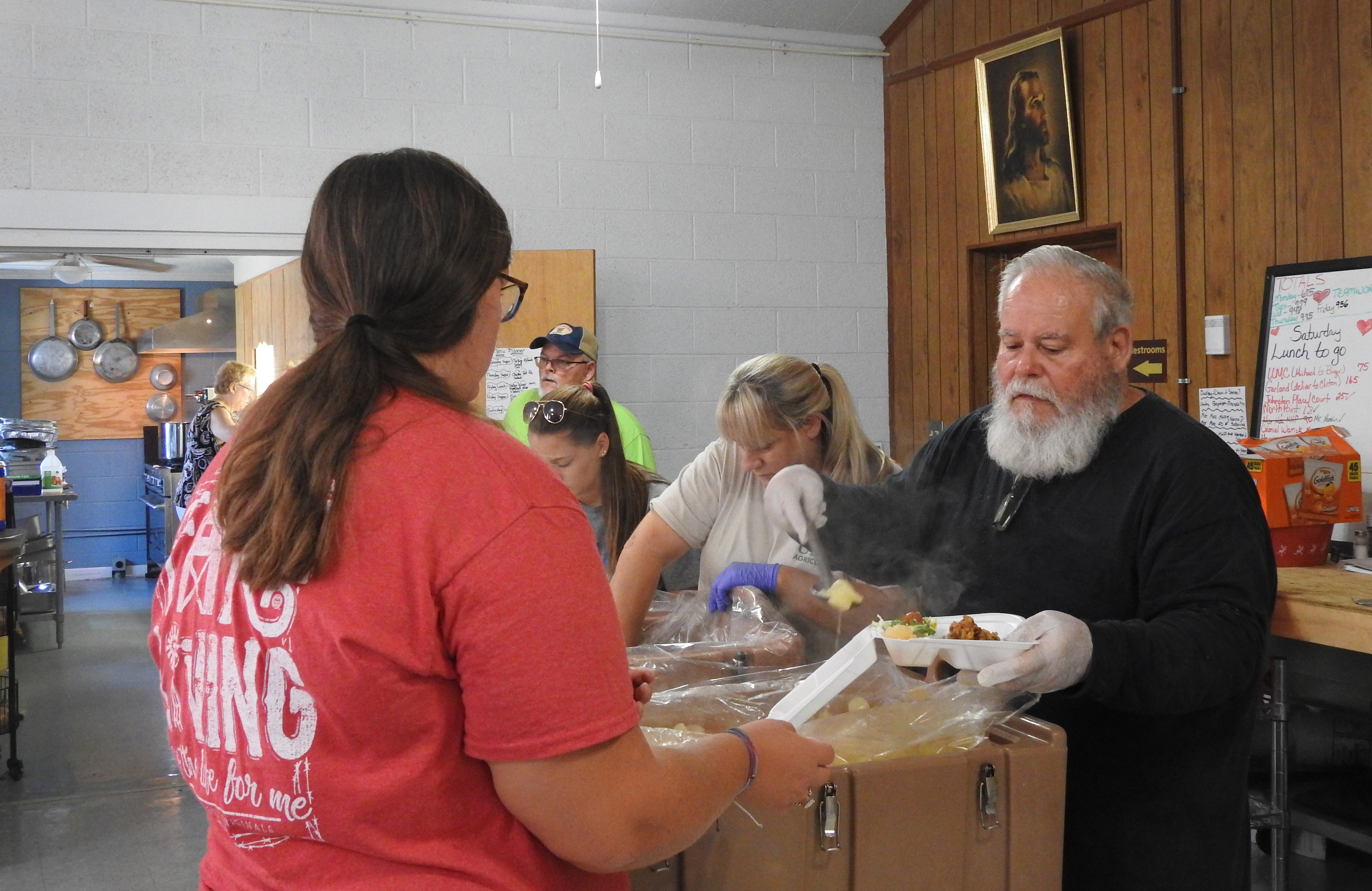 As of Sept. 22, Make a Difference had served 5,000 meals to storm victims, and church members joined the food bank’s regular volunteers in cooking and delivering.

“We’re trying to do what we can for the community,” said Eddie Richards, Brogden United Methodist’s trustee board chair.

Ward has been touring the worst affected parts of her conference and conferring with South Carolina Conference Bishop L. Jonathan Holston about damage and response.

Donate to the U.S. Disaster Response Advance #901670 for the United Methodist Committee on Relief.

In her sermon at Clarks, Ward emphasized the strength of the United Methodist connection as it responds long-term after disasters. She called on members to pray, give money and volunteer as they can for storm relief.

She also got a laugh as she talked about the church’s approach to burning a mortgage, which included enclosing the flame in glass.

As families struggle to survive, UMCOR joins Mozambique churches in responding to food, shelter and other humanitarian needs.
Mission and Ministry

Virtual worship is here for good

If there’s a positive side to the coronavirus for churches, it’s that many of them have dramatically upped their game online.
General Church

The year 2020 was an eventful and difficult one for the church. Photographers from UM News documented a year in the life of United Methodism worldwide.