His mom, the Rev. Shirley L. Canty, a United Methodist pastor in North Carolina, has more reason to be proud of her son than his big win.

Chris Canty grew up United Methodist. His mother remembers leaving for a clergy convocation when her son was about 6. Chris was thrilled the bishop would be there. "Could you ask the bishop if I could be your junior pastor?" he asked. That commitment to the church stuck.

While a professional football career means he cannot make it to church every Sunday, he shares his love for Jesus Christ in other ways.

Four years ago, he created a football camp for youth at his alma mater, Charlotte Latin School in North Carolina. That venture - which has involved 1,000 youth since its inception - was the seed that blossomed into the Chris Canty Foundation.

Mentors are an essential facet of the foundation as they model success, accountability and responsibility.

"We try to put people in their lives that can demonstrate those attributes and then, in turn, get kids to implement those characteristics in their own lives, where they take up the mantle and (become) responsible, accountable, productive citizens," he said. "That's something I definitely want to pass down to the next generation of youth."

Reaching out is high on Canty's agenda.

"God has blessed me with a tremendous platform to be able to influence young minds," he said. "I have a passion for working with kids. I just try to utilize the platform of athletics positively to influence their lives in any way I can. 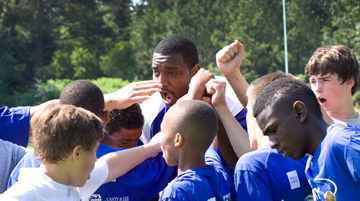 NFL football player Chris Canty started the Chris Canty Camp of Champions Football Camp, which encourages children and youth to strive to do their best. A web-only photo courtesy of the Chris Canty Foundation.

Steering youth in a positive direction

"We've been able to broaden our network and stretch into some other programs, both in the Charlotte area as well as New York and New Jersey metropolitan areas," Canty said. The foundation works with city police and fire departments as well as an after-school enrichment program related to the African Methodist Episcopal Zion Church.

"We stretch our arms in a lot of different directions," Canty noted. "But our focus is influencing kids and steering them in a positive direction." He forged a partnership with a Charlotte university and area schools to recruit children and youth for a community-cleanup project. "It's very exciting to be a part of that initiative," he said.

Canty didn't participate in sports until his junior year in high school. But those teen years on the basketball court and the football field helped him lead his team to a state championship in 1999. After a successful gridiron experience at the University of Virginia, where he majored in African-American studies, he was drafted by the Dallas Cowboys in 2005. Four years later, he joined the Giants roster.

His faith has sustained him every step of the way, Canty said.

"It's sustained me throughout the ebbs and flows, the ups and downs of, not only my professional career, but (also) my personal life. That's the one constant that has allowed me to continue to press forward throughout all the adversity I've faced and all the challenges life has thrown my way."

He strives to give back to the church that has nurtured him. "I'm excited about the football camp I'm going to host as a part of a youth retreat for The United Methodist Church this summer," he said.

A supportive family - his parents and two older brothers - is a blessing as well. 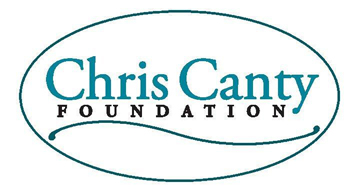 About the Chris Canty Foundation

"My dad never misses a game," Canty said. "I'm thankful to have him there. On Saturday evenings, we always do dinner. It's a time for us to spend some father-son time and catch up on the week's events." His father, Joseph Canty, owns a construction business. Both parents have been involved in community ministries throughout their careers.

Canty also is grateful for his mother's support. "I always tell her (that) her job is much more important than my job," he said. "So I don't mind her not being able to come to football games because she's doing something more important. She's saving souls." And when her schedule permits her to go to a game, he said, "It's always special to have her in the stands."

Shirley and Joseph Canty, who met at United Methodist-related Claflin University in Orangeburg, S.C., were their son's loudest cheerleaders at the Super Bowl.

The game "was awesome from beginning to end," an enthusiastic Shirley said. "The team just came together - and I got to see that!"

Defensive tackle No. 99 is still euphoric about the Giants' victory.

"I'm just enjoying every moment of it, embracing it," Canty said. "I'm just trying to enjoy it and soak it all in."

Not surprisingly, he said the most exciting part of the game was the opportunity to stop Patriot quarterback Tom Brady.

"We got the ball back with a minute left. They were down by 4, and it was up to the defense to stop him from getting his team down to the end zone and scoring."

How does Canty envision life after football?

"Obviously football is always going to remain a special part of my life," he said, "even though I might not be able to continue to play. I plan to stay close to the game, whether it (is) coaching younger kids, commentating or being an analyst.

"But my passion is to work with kids, so I think I will continue to do that and be more involved in philanthropic efforts of that nature."

That wouldn't surprise his mother. "Chris has always had a love for people &ellipsis for encouraging people," she said. "He is very compassionate. And he has a heart for children &ellipsis for helping children to dream."