Bishop Christian Alsted challenged those attending General Conference 2016 to offer themselves humbly and in full to Jesus’ authority, as did a Roman centurion described in the New Testament.

Alsted, of the Nordic and Baltic Episcopal Area, said he joins other United Methodists in wanting growth and renewed vitality for the denomination.

“But in the midst of all my purposefulness and busyness, I may just overlook what became painfully obvious to a pagan centurion,” said Alsted.

“The starting point of all transformation is to humbly and wholeheartedly submit myself to the wounded healer Jesus Christ and to unconditionally depend on him for the healing of the church.” 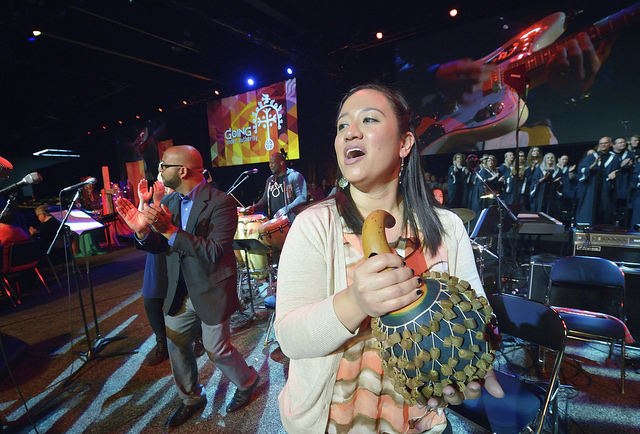 Musicians lead singing on May 12 during morning worship at the United Methodist General Conference in Portland, Ore. Photo by Paul Jeffrey, UMNS.

General Conference, the United Methodist’s top law-making assembly, continues through May 20 at the Oregon Convention Center in Portland.

Worship services are part of the daily proceedings, and Alsted preached in the May 12 morning service, using Matthew 8:5-13 as his text.

Those verses tell of Jesus’ encounter with the centurion, who wanted help for a servant suffering terribly from paralysis. Jesus offers to go to the centurion’s home and heal the servant.

But the centurion says he is unworthy of such a visit. He adds that, as a military man who understands authority, he knows Jesus needs only to “say the word” and the servant will be healed.

Jesus then says he has not found anyone in Israel with such strong faith.

To Alsted, the story holds special significance for Christians from wealthy, developed countries. He included himself in saying they are prone to feelings of privilege that impede commitment to Jesus.

“The centurion is getting it right —ʽLord, I am not worthy to have you come under my roof,’ ” Alsted said. “ ʽHumility’ is the word — however, humility is not really part of our vocabulary.”

Alsted referred to the need for more than medical healing in a time of terrorism and acute social problems.

He quoted U.S. environmentalist Gus Speth as saying: “The top environmental problems are selfishness, greed and apathy, and to deal with these we need a cultural and spiritual transformation, and we scientists don’t know how to do that.”

As an example of someone who does know, Alsted pointed to Regina Židonienė, a United Methodist who for 15 years has led a ministry in the poor community of Birzai, Lithuania. It helps women, youth and children by meeting basic food and clothing needs, and by providing education and exposure to the arts.

“This is just one story of thousands of stories about ordinary United Methodists, who on a daily basis ask Jesus just to say the word, and who make themselves available as instruments of bringing his healing to the world,” Alsted said.