It's said that the two items no one wants to see being made are laws and sausages. Perhaps the United Methodist Book of Discipline should be added to that list.

It takes almost six months - and a process defined by the rules of the General Conference - before the denomination knows exactly what happened after its big legislative assembly.

The Book of Discipline of The United Methodist Church outlines denominational law, doctrine, administration, organizational work and procedures. The Book of Resolutions contains pronouncements on social issues. Every four years, delegates to General Conference vote on changes to both books.

Marvin W. Cropsey, editor of quadrennial resources at the United Methodist Publishing House, which is charged with publishing both texts, explained the process.

After General Conference approves a petition, what happens before the petition language goes into the Book of Discipline or the Book of Resolutions?

Work begins during the plenary session with the four members of the Committee on Correlation and Editorial Revision, who sit on the dais, taking notes, listening to what is or is not approved, and making necessary adjustments for accuracy and consistency. 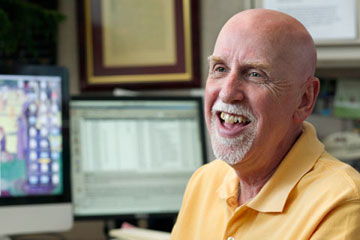 The first step is for the committee to make certain approved petitions are placed correctly into CALMS, an acronym for Conference and Legislative Management System. This computer program handles all of the legislative administration of the conference. The committee looks at the content and instruction of a petition that, in many cases, can affect additional paragraphs in the Discipline. For instance, a word change, such as "probationary" to "provisional" must be changed everywhere it appears. That is the committee's correlation work.

If one piece of legislation contradicts another that has just been approved, my staff and I will look at the time stamped for approval in legislative management system. The latest petition governing that paragraph or issue is the action of the General Conference, and the Committee on Correlation and Editorial Revision will make sure no conflicts remain when the book is printed.

How do you determine what material goes into which book?

Petitioners must state their intent on the submission form. They may intend to amend or make a new paragraph or delete something in the Discipline or the Book of Resolutions.

Some petitions may not go into either book, and that is indicated on the form for submitting petitions. This situation is subject to correction by the petitions secretary, the Rev. Gary Graves, Kentucky Conference. These petitions generally will instruct, for instance, asking a board or agency to create a study committee on something or contain an instruction to the Council of Bishops or perhaps the secretary of the General Conference. We had a petition several years ago for The United Methodist Church to provide an honor for a theologian. That was the action of the General Conference, but it did not go into either book. 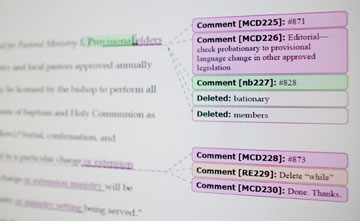 The "redline edition" of the Book of Discipline shows everything that has been removed, altered or newly added by General Conference.

How are identical or similar petitions handled?

Who are the people involved in the editorial process?

According to the Discipline, the book editor of the United Methodist Publishing House is the editor of the Discipline. That is the law. Our book editor, Neil Alexander, is also the publishing house president. The rules of the General Conference mention the book editor, the Discipline editor or the editor's established colleagues. Much of the editorial detail is done by my staff and me, but Alexander directs and approves everything. The Committee on Correlation and Editorial Revision outranks us. It settles any discrepancies between conflicting petitions and corrects errors according to the Plan of Organization and Rules of Order.

Occasionally during the editorial process, when we find things that have not been dealt with, I go back to the committee and ask how the committee wants an issue handled.

Once the revisions are done, we produce a "redline edition," which shows clearly everything that has been removed, altered and newly added by legislation. That redline edition goes to the Council of Bishops and to all boards and agencies. Those groups review our work. They always find things that still need revision. They may ask us to check the record again. We go back to the legislative management system record and make the revisions. Although the Book of Resolutions does not have an oversight committee as the Discipline does, we have a sound and solid correction process before we declare the books finished and ready for print.

Where is this process defined?

It is in the Plan of Organization and Rules of Order of the General Conference and approved by the conference. It is not in the Discipline.

Go to the 2012 General Conference website to call up all of the petitions and see how they were handled.

The complete Discipline is available in English, Spanish and Korean from the United Methodist Publishing House. Spanish and Korean versions are not online. The central conferences may translate and print portions of the Discipline. The United Methodist Publishing House is not involved in producing any of those editions. The Book of Resolutions is available only in English.

Can the language approved at the plenary session be changed or modified in the process?

Not in any substantive way. I can change a verb tense or, if a petition for a resolution says a particular board or agency or organization outside of the church is responsible for a certain document, and that is not accurate, I can correct. If there is an error in a date, I can correct that. Legislative committees sometimes produce sentences that are not grammatical or have some other problem, and the Committee on Correlation and Editorial Revision has authority to edit that. If I discover something I think problematic in terms of understanding and the committee has not made a correction, I can ask the committee to rule on what it was supposed to be if the written record is not clear. Sometimes apparent discrepancies cannot be resolved and the issue eventually appears on a Judicial Council docket.

How long does the editorial process usually take? When will the books be available?

The Committee on Correlation and Editorial Revision is finishing its work. The redline will be next. I am finishing putting the new resolutions into the Book of Resolutions, deciding where each resolution goes and working on titles for resolutions when a title was not included in the petition. The schedule calls for the redlines to go to the Council of Bishops and the boards and agencies on July 7.

When will the changes outlined in the Book of Discipline and the Book of Resolutions take effect?

According to the Discipline, all changes go into effect Jan. 1 after the General Conference with two exceptions. The first exception is that proposed legislation sometimes has a prescribed date that is earlier or later than Jan.1. The second exception involves constitutional amendments. Those amendments are not in effect until the annual conferences vote on them. The results of those votes are forwarded to the Council of Bishops for its fall meeting. When the Council of Bishops verifies the ballots, those constitutional amendments become law and are part of the Discipline.

Since 2003, Marvin Cropsey has served as editor of quadrennial resources for the United Methodist Publishing House. This detail-oriented man with a quirky sense of humor treasures the opportunity.

"My job is very rewarding," he says, "because it's so important to the livelihood of the church.

"The Book of Discipline and the Book of Resolutions can seem like lifeless books," Cropsey continues, "but when I get inquiries from local churches or district offices or sometimes even from an episcopal office, it tells me that those words on a page actually come to life somewhere outside this building. That makes it worth it. I love it."

And while some people may think he has the worst job in all of United Methodism, Cropsey disagrees.

"I don't feel that way at all," he says. "One person has been selected to do this job. It's an honor. It's a privilege. And I am filled with thanksgiving that I get to do this work."

How do you handle errata? How do you make corrections after the books are printed?

There are many other kinds of errata. We do separate errata listings for the Discipline and the Book of Resolutions. The rules of the General Conference say that agencies, clergy and local churches can submit errata directly to the editor of the Discipline. The list of eligible submitters does not include, interestingly enough, any local church members. However, every question that I get about the reliability of the Discipline is researched thoroughly, no matter where it originates. For the most part, I just make a decision on whether they are raising an issue that requires correction. Sometimes I need assistance. I may contact Sally Curtis AsKew, the Judicial Council clerk, or JoAnn McClain, the administrative assistant for the Council of Bishops, for clarification or validation.

For example, in the list of bishops in the last Discipline, a family member of two deceased bishops - a father and son - informed me that we had the middle name of the younger bishop incorrect. In that case, I went to the United Methodist Commission on Archives and History. The information there was inconclusive. I finally found documents in the Kentucky and Kansas state archives with the names of those two men to determine the correct information. The name was incorrectly recorded. It will be changed now in our new listing.