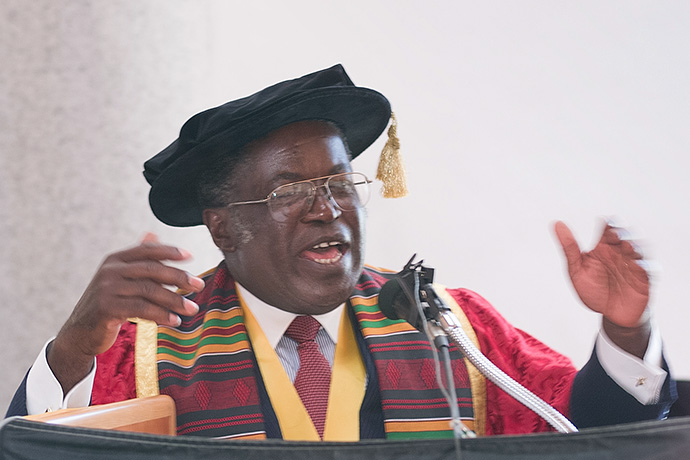 Former Africa University vice chancellor Rukudzo J. Murapa is being remembered for his vision, networking and leadership, including helping to establish the United Methodist university’s Institute of Peace, Leadership and Governance.

Murapa died at age 82 at Murambi Garden Clinic in Mutare on Oct. 27.

In Zimbabwe, a vice chancellor is the equivalent of a university president in the U.S. He was the second vice chancellor, serving from 1998 to 2007. His death comes just days after the university celebrated its 30th anniversary.

Friends and colleagues say the former political scientist was instrumental in laying a firm foundation for the institution, which has grown to become a world-class university. 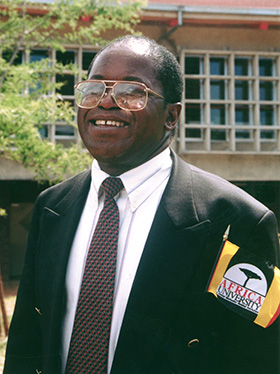 “As the skilled stonemason builds his wall, sturdy and strong, capable of braving any force, so too did Professor Murapa play a part in laying the foundation upon which we so proudly stand,” said Africa University in a statement.

“We do not take for granted all that he did and continued to do for Africa University until his final days,” the institution said.

James H. Salley, Africa University associate vice chancellor, said Murapa went to school at United Methodist Old Mutare Mission and had the background and experiences to know how important a relationship with the diaspora was for the university and the students.

“He was a master politician with the ability to think beyond Mutare and Zimbabwe,” Salley said.

“Working for the United Nations, he became a global citizen and brought that perspective to AU with the concept of the Institute of Peace, Leadership and Governance. I am so happy he lived long enough to see the dreams of peace and governance that emanate from the university become a reality,” he said.

“As we say in my home area of South Carolina in the U.S., ‘It ain’t no secret what God can do; what he’s done for others, he’ll do for you.’ With his passing, God is pleased with his work,” Salley said.

Bishop Eben K. Nhiwatiwa of the Zimbabwe Episcopal Area said Murapa will always have a special place in the hall of fame among the list of vice chancellors who served Africa University.

“The former vice chancellor told us people should know that they are at a university by simply looking at its grounds," Nhiwatiwa said. 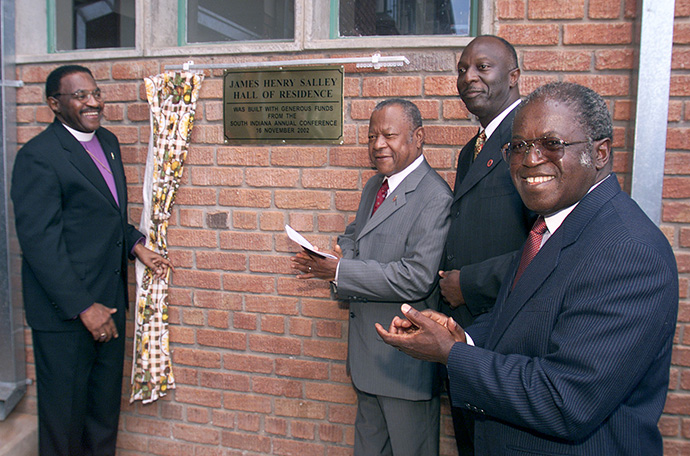 Rukudzo J. Murapa (right) applauds during the dedication service for a new residence hall at Africa University in 2002. He was joined at the dedication service by (from left) now-retired Bishops Woodie W. White (left) and Emilio de Carvalho and James Salley, Africa University associate vice chancellor, for whom the residence hall is named. File photo by Mike DuBose, UM News.

The bishop, a former lecturer at the school, was among the staff who first heard Murapa mapping out his vision of what a university should look like. Murapa’s initial address to staff in 1998 was in the room that now serves as Moot Court for the new law program, which started a few weeks ago.

“As he addressed us, he had his long-sleeved shirt rolled up. He had no coat and no tie. For me, that was a symbolic art of communicating, ‘I am here for serious business.’ Indeed, serious he was,” Nhiwatiwa said.

He described Murapa as an energetic visionary, always networking near and far to raise the profile of the university.

“He catapulted the name of Africa University onto the community of academics,” Nhiwatiwa said.

“For African bishops, we shall forever remember that our annual gathering is an idea which originated with Professor Murapa,” said Nhiwatiwa, who is president of the Africa Colleges of Bishops.

When the bishops met at Africa University in September, Nhiwatiwa, Bishop Mande Muyombo of the North Katanga Area and Africa University’s new vice chancellor, the Rev. Peter Mageto, took time out to visit Murapa at his home in Mutare.

The memory of Murapa and his late wife, Hellen, will live on at the university through a residence hall named in their honor. It was built with funding from the Indiana Conference.

He is survived by son Kudzai, daughter Meleni and three grandchildren.