Martha Stamps is waging a war against sugary cereal. And while she's at it, the "minister of food" at West End United Methodist Church in Nashville, Tenn., may also take on canned fruits, canned spaghetti and the accompanying meatballs and children's juice boxes.

"My interest in childhood obesity really stems from my passion for scratch cooking," she said. "Many of these shortcuts have contributed to the huge number of fat calories and the unhealthy number of sugar calories that are in a child's American diet. There is so much pressure on everyone - from chefs to parents - to open boxes and open cans to do things in an easier, faster, and simpler way, but I want to do things in a way that makes food taste better - especially to children."

Once the owner and chef at one of Nashville's most elite, New Southern-style restaurants, Stamps served up dishes like chicken croquettes, saffron couscous and squash casserole to an audience of diners that included entertainers Dolly Parton and Crystal Gayle and former Vice President Al Gore. Now, three years later, she is on a personal mission to change the way children at West End Preschool eat and think about food.

"Now I serve many of the same foods, but to children instead of celebrities," Stamps laughed.

"My life has changed," she said. "Now I want children to know where their food comes from, to take time to enjoy their food, and to not be afraid of trying new things."

The news that Tennessee has the fourth highest childhood obesity rate in the nation hit Stamps hard. When she heard that children who are obese in their preschool years are more likely to be obese in adolescence and adulthood, she was determined to step up her efforts to bring healthier food to the young diners at West End.

"This is the first generation since World War II to have a shorter life expectancy than their parents, and it's because of what they eat," Stamps said. "We're seeing more diabetes, more heart disease and more high blood pressure in our very young children." 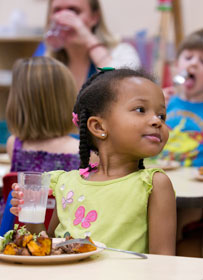 Stamps has the wholehearted support of the United Methodist Association of Preschools Tennessee. The organization's president, Gayle Callis, stressed the importance of feeding children not only spiritually but also nutritionally.

"We've found that children as young as 2 learn food preferences from their peer groups, and this has more influence than parents and family," Callis said. "It tells us just how much children are impacted during the average 35 hours they spend in child care every week."

Stamps, a lifelong member of West End, decided two things when she joined the church's culinary staff. First, she was going to cook from scratch. Second, she was going to cut out products with high fructose corn syrup. Change didn't come easy for some.

Spinach salad was one of her first experiments. But, before she could get the children to take a bite, she had to win over the teachers. When a reluctant preschool teacher had the creative idea of reading "The Very Hungry Caterpillar" to her class and giving them spinach "leaves" to eat - just like the caterpillar in the story - Stamps felt she had overcome a major hurdle.

Once spinach salad became a staple on the lunch week menu, the cafeteria door was open for other taste bud adventures.

"Here at school we have the opportunity to introduce new things," Stamps said. "We give the kids food like Asian noodle salad, barbecued tofu, oven-fried carrots. We do a pizza that they love. It's got roasted apples on it and pesto."

According to Stamps, new flavors have to be introduced 11 times for them to become something recognizable on plates and palettes.

"It's been proven time and time again that the more likely candidates for obesity are ones who have a really narrow range of what they eat," she said. "Kids that eat a wide variety of food are much less likely to have trouble with their weight."

"Obesity is horrible on self-esteem," Stamps said. "From a pretty early age, children are made aware that they are overweight. I've actually observed very young children who will start sneaking food they've been told is a no-no. They resort to hiding what they're eating. That's not healthy physically or psychologically."

While dessert isn't typically on the menu, healthy snacks are. Popular picks are banana muffins, oatmeal bars and fruit smoothies. Stamps admitted that the jury is still out on the broccoli and applesauce muffins.

She said dessert is okay &ellipsis; just not every day.

"Acknowledge it as a treat, then sit down and savor it slowly," she recommended. "Sometimes at my house I'll put a dessert on our best china and use really pretty silverware and make a special deal out of it. It's important that treats don't become something to sneak and hide. We don't want to develop a sense of guilt because guilt builds more guilt, and it starts a horrible cycle that's really hard to break.

Not just about what children eat 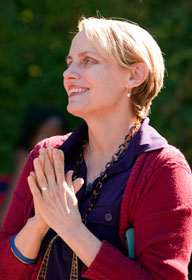 Martha Stamps says she likes for children "to not be afraid of trying new things." A UMNS photo by Mike DuBose.

One good habit is eating together as a family.

"It's so important to sit down with our children and eat with them," Stamps advised. "Our teachers have always done that and parents should do it at home as well. It's a luxury nowadays. We need to avoid eating fast food out of sacks crumpled up and then thrown in the back of a car and things that are heated up in a microwave and then thrown on the counter for kids to come and get."

The act of saying a blessing over the food is also an important tradition. Stamps advocated it as a chance to stop the busy chatter, an opportunity to feel one another's presence, and a time to invite God back into our lives, especially at the end of a busy day.

"I like for us to look forward to meals, to savor what we're eating, to be conscious of where it came from, how it was grown, and in a spiritual manner, to be very conscious of it being a gift from God," said Stamps. "Whether it's an adult or a child, it's important that we understand that food is a form of sustenance in which we can find so much joy - that it's beautiful to look at, wonderful to smell and tastes so amazing. It's not just for fueling up, but for sitting down at a table with other people, enjoying, having conversation and sharing our day. It's about having a healthy relationship with food."

Editor's Note: The original story referenced the Let's Move Faith and Communities initiative which is no longer operating. Read more about the program.