The finance committee of First United Methodist Church in Anytown, USA, is struggling with a higher electric bill, the need to repair the furnace, higher insurance premiums and a desire to increase the pastor's salary.

With these worries, committee members are also debating whether they can afford to pay their apportionments, which support ministries around the world through their conference and general church.

The General Council on Finance and Administration, the denomination's finance agency, understands these concerns as it looks at the general church budget.

The council is responsible for proposing a budget for the general church based on projections of church attendance and the ability of members to provide funds beyond the needs of their local churches and annual conferences. 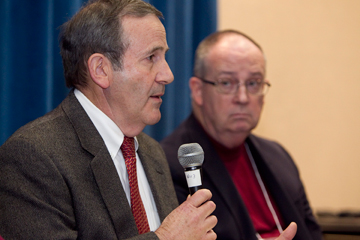 Economist Don House (left) helps lead a discussion about the church budget during the pre-General Conference news briefing at the Tampa Convention Center in Florida. At right is Bishop G. Lindsey Davis. A UMNS photo by Mike DuBose.

During a March 6-7 meeting in Nashville, the 40-member governing board of the finance agency received an update on financial projections for the 2013-16 quadrennium.

While noting membership losses were increasing at a faster rate than previously expected - from 1.25 percent to 1.4 percent - House said the committee believes "growth in the economy in the coming quadrennium will be slightly better than previously predicted."

The committee, therefore, recommends that the council continue to support the $603.1 million budget for seven general church funds. That's the amount previously recommended and sent to General Conference with the support of the Connectional Table, a 60-member group that coordinates the denomination's programming and resources.

How it will be used

The proposed budget allocates the following:

Where your offering goes

When you put a dollar in the regular offering at your church, here is how it is currently distributed:

"We do look at the $603 million as the (upper) limit," said Louisville (Ky.) Area Bishop Lindsey Davis, president of the council.

House said he predicts a brighter future for the denomination. He bases that prediction, in part, on the fact that churches are increasing financial debts. While many might regard that as a negative factor, House says that 60 percent of churches that add debt increase membership.

"They may be building family life centers or expanding their facilities," he said. "When they do so, without reducing staff, membership increases."

The projected $603.1 million recommended budget now goes to General Conference, the top legislative body of the denomination meeting in late April and early May in Tampa, Fla.

During that 10-day gathering, 988 delegates to the legislative assembly will process 110 petitions from individuals, churches and organizations seeking new funds or reallocating funds for various worthy endeavors.

The finance agency plans to provide a listing of all proposals requiring additional funds in the first edition of the "Daily Christian Advocate," a Congressional Record-style daily publication that includes news, legislative proposals and a verbatim record of all speeches in plenary sessions.

During the first week, all proposals will be reviewed by legislative committees, which can amend them, oppose them or support them. Committee recommendations will then go to the plenary session for preliminary action.

Members of the committee of 10

The following representatives from the General Council on Finance and Administration and the Connectional Table will review possible ways of funding the approved proposals at General Conference.

If a proposal with financial implications is approved by the delegates, it will be referred to the Connectional Table and the General Council on Finance and Administration. A 10-member committee comprised of five representatives from each body will review possible ways of funding the approved amounts. The group will negotiate with staff and members of the agencies to see if the requested amount can be secured from within existing budgets or reserves.

The recommendations of the 10-member committee will then be considered by members of the finance agency and the Connectional Table at meetings on Tuesday and Thursday evenings. Final recommendation will be submitted to the "Daily Christian Advocate" on Thursday night for plenary session action on May 4, the final day of the conference.

The financial administration legislative committee will also have the right to respond to the recommendations from the finance agency and the Connectional Table.

Budget decisions will be finalized on May 4, and delegates may return to First United Methodist Church in Anytown, USA, to tell them about their decisions.

In all likelihood, decisions in Tampa will not have much effect on the Anytown church since only 2 cents of every dollar supports the denomination's seven apportioned funds. Most money remains in the Anytown church to help pay the electric bill, repair the furnace and give the pastor a raise.

*Peck is a retired clergy member of New York Annual Conference, and he has attended 11 sessions of the General Conference, including four times as editor of the "Daily Christian Advocate."