The United Methodist Church's way of doing business remains "unsustainable," and the changes made during and immediately after the 2012 General Conference are insufficient to address the challenges the denomination faces.

That's the assessment in the final report of the Call to Action Interim Operations Team, which since its formation in late 2010 has been looking at ways to reorder the life of the church.

"Dramatically different and new behaviors, not incremental changes, are required," said the nine-page report. "We have not yet seen the degree of shared sense of urgency or commitment to systemic adaptations with the redirection of leadership expectations and sufficient resources that our situation requires."

The report calls on the denomination to:

With this report, the group has completed its specified assignment, said Neil Alexander, executive coordinator of the Interim Operations Team. Alexander is also the president and publisher of the United Methodist Publishing House.

He told United Methodist News Service that the Council of Bishops and Connectional Table, which coordinates the denomination's ministry, mission and resources, will determine any future initiatives. The Council of Bishops will meet Nov. 4-9 for the first time with its new members. The Connectional Table will have its first meeting with new members Jan. 15-17 in Nashville, Tenn.

"The (Interim Operations Team) has disbanded; all unused funds allocated for IOT's work remain in the General Church treasury and others will decide what efforts may ensue over the coming weeks and months," Alexander said. 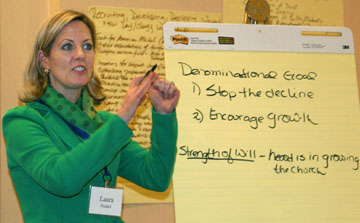 Laura Nichol, a member of the Call to Action Interim Operations Team, facilitates a conversation about possible churchwide cultural changes at a Chicago-area meeting in April 2012. A UMNS photo by Heather Hahn.

The Council of Bishops and Connectional Table launched the multiyear Call to Action process and appointed the Interim Operations Team in the wake of the 2008 economic downturn and decades of declining U.S. membership.

General Conference delegates by almost 60 percent approved an amended version of the group's restructuring proposals, called Plan UMC. But on the last day of the assembly, the Judicial Council - the denomination's equivalent of the U.S. Supreme Court - ruled the plan violated the denomination's constitution.

The Interim Operations Team also called for a nonresidential bishop to lead the Council of Bishops and build collaborative work on increasing the number of vital congregations. However, the constitutional amendment to create the post fell short of the two-thirds vote required to pass.

Yet, General Conference did approve the Interim Operations Team's proposal to redirect funding to identify, recruit and support clergy under the age of 35. Delegates established a new $5 million fund for theological education in central conference regions of Africa, Asia and Europe, and $7 million to recruit and train young clergy in the United States.

In its final report, the team pointed to other changes it sees as positive developments.

The denomination's general agencies are adopting new ways of governance, evaluations and doing their work.

The Council of Bishops has adopted a new organizational plan to give active bishops more time to focus on increasing the number of vital congregations in their areas. 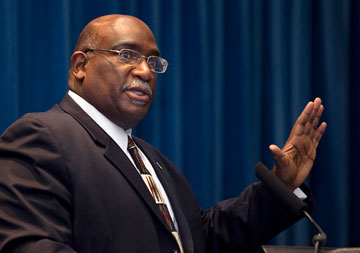 The report also noted that pastors, annual (regional) conference leaders and others are sharing and building on ideas to increase the number of vital congregations. It specifically pointed to the United Methodist Vital Congregations Project as enabling peer-to-peer support among local church and annual conference leaders to achieve greater fruitfulness.

Interim Operations Team members repeatedly have said it will take more than legislation to reach the denomination's overarching goal of making more disciples of Christ for the transformation of the world.

"We are not overly concerned that this or that piece of legislation did not make it through the legislative machinery and judicial review at General Conference," the report said.

"But we do caution that we not mistake the several but ultimately small measures of progress that emerged at and after General Conference as representing a sufficient degree of change in light of the challenges we face."

The United Methodist Church is growing, particularly in Africa but also in Eastern Europe and the Philippines. But in the United States, most annual conferences reported declining membership in 2011.

What remains most essential in reversing this trend and strengthening the church, the report says, is that leaders across the denomination "demonstrate faithful love and obedience to God, courage, resilience, political will, active continuous learning, willingness to risk, and a transparent accountability for observable and planned results."

*Hahn is a multimedia reporter for United Methodist News Service.