United Methodists in the Philippines are among the religious groups expressing alarm over the rising death toll in the “war on drugs” instituted by that nation’s president.

A Sept. 2 statement from the National Council of Churches in the Philippines, of which United Methodist Bishop Rodolfo Juan of the Manila area is a vice chairperson, recognized “the buoyed hopes of the people” over President Rodrigo Duterte’s commitment to eradicate corruption and make reforms but added, “the killings of alleged drug pushers must stop.”

Earlier, on Aug. 31, United Methodists joined in a metro-wide candle lighting in front of St. Domingo Church in Quezon City against extrajudicial killings. The gathering was sponsored by the Promotion of Church Peoples’ Response, the Association of Women in Theology and the Ecumenical Women’s Forum.

In a unity manifesto, “Stop the Killings,” the sponsoring groups expressed alarm that nearly 1,000 people had been killed in a month’s time. “We unite to demand an end to the killings in the name of the ‘war on drugs,’” the manifesto said. “Justice and due process must be upheld. Human rights must by no means be violated.

“We demand to investigate and punish the masterminds of the illegal drug trade (the big drug lords, their protectors in police, military and government) and the perpetrators of the extrajudicial killings.”

An ongoing “kill list” is being used by the Philippines Inquirer to document the deaths. 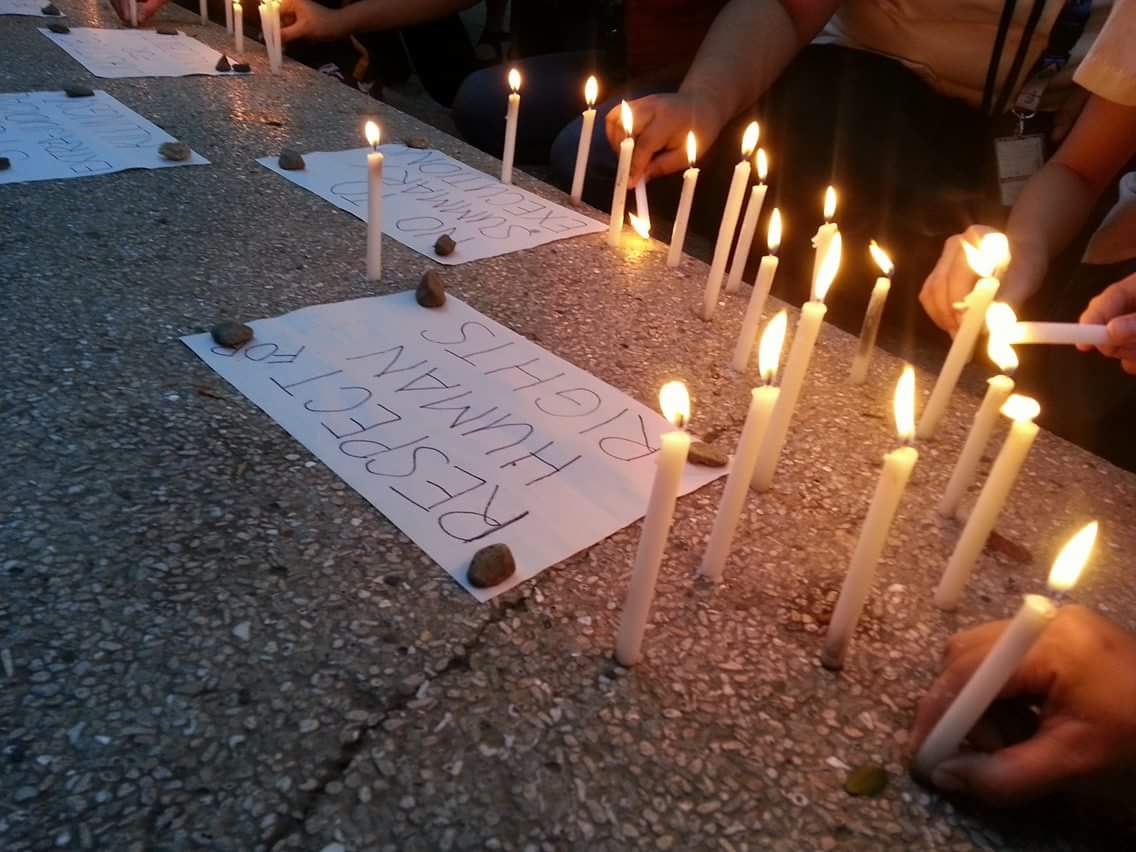 Candles and prayers to uphold human rights during a vigil at Wesleyan University-Philippines in Cabanatuan City. Photo courtesy of Bernard Cortez.

Duterte received international attention when the U.S. called off a planned meeting Sept. 6 in Laos between the Philippines president and President Barack Obama after he used a curse word to describe any attempt by Obama to criticize his actions in the war on drugs.

Students from the College of Education in Wesleyan University-Philippines in Cabanatuan City held a candle lighting and prayer gathering as well. Led by Konseho Critiko (Critical Thinking Society), they were joined by students from the United Methodist, Wesleyan and Roman Catholic churches.

"We call to stop killings,” they said. “We seek accountability for killings. All of us hate drugs, but we respect life, we uphold peoples' rights."

“It took President Duterte to make me conscious of how serious and widespread the problem is,” he explained. “I appreciate his commitment in eradicating the problem.”

But Arichea added that he was troubled by killings that appear to have no legal basis and a presidential response that seems close to martial law.

The statement from the National Council of Churches in the Philippines recognizes the threat of illegal drug use to the country but stressed that the killings “shake our confidence in the ability of the government to uphold basic human rights and legal processes which are hallmarks of our Constitution. At times, the President affirms these tenets. At times, the President refers to them as obstacles.”

The statement also said: “The 1,160 of the 1,916 cases under investigation as of Aug. 23, 2016 … are not simply statistics and certainly pale in comparison to those whose lives were wasted by the drug menace.

"But, we cannot go on with this impunity. One killing is one too many. While alleged drug lords and protectors have their day in court, many others suffered fatal end and their number is increasing. This creates more fearful and vengeful hearts.”

Church leaders also commended a growing campaign to build rehabilitation centers for drug users and encouraged churches “to make our prayers concrete by mobilizing our resources to help out in this task.”