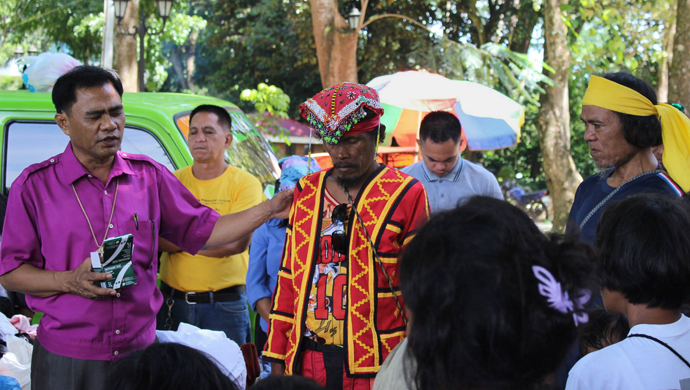 Bishop Rodolfo A. Juan (left) prays for a leader (red vest) at a camp for displaced people in Malaybalay, Philippines. United Methodists pooled their resources to provide relief to wounded soldiers and people displaced due to violence between the military and the Islamic State group or ISIS. Photo courtesy of Dan Ela.

United Methodists pooled their resources to provide relief — including prayers, food, medicine, bottled water and clothing — to wounded soldiers and people displaced because of violent conflicts in the country.

The two-day relief effort, led by Davao Area Bishop Rodolfo A. Juan, began with a group of about 85 displaced families at a camp near the Bukidnon Provincial Capitol grounds in Malaybalay. The camp in northern Mindanao was set up after an outbreak of violence against Lumads.

On the second day, the Filipino United Methodists visited soldiers wounded in the fighting in Marawi, where there has been fighting between the military and the Islamic State group or ISIS. 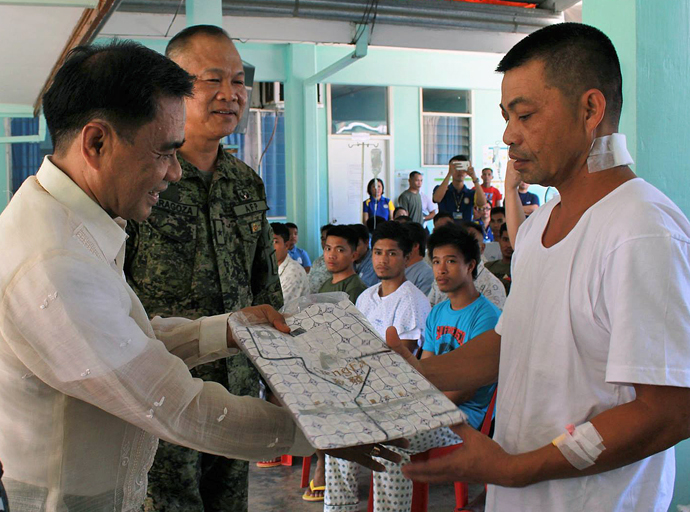 Bishop Rodolfo A. Juan (left), gives a set of pajama to an injured soldier during a two-day relief effort by Filipino United Methodists for wounded military and people displaced by violent conflicts in the Philippines. Photo courtesy of the Rev. Capt. Eduardo Copliting.

Juan was accompanied in the relief efforts by district superintendents, clergy, lay people and students from Bishop Han Theological Seminary.

The group visited Jose Ma. R. Zubiri Jr., the provincial governor. Juan laid hands on the governor and prayed for him.

"My prayer was for wisdom and protection and good health for him and his son, a senator, in their leadership. Of course, for compassion and love in his heart to care for the Lumads," Juan said. The Lumads are an indigenous people who have been the victims of genocide and human rights violations in the Philippines.

Rogemer Sison, a full-time student at Bishop Han Theological Seminary, said the displaced people who are temporarily sheltering at the capitol ground are hungry. 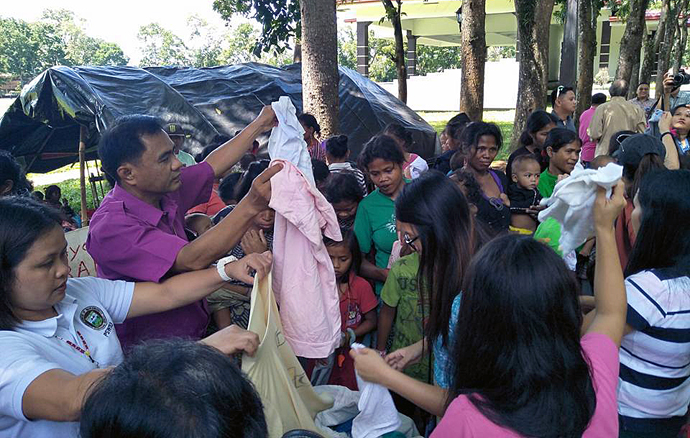 Articles of clothing are among relief items distributed by United Methodists, including Bishop Rodolfo A. Juan (second from left), to Lumads fleeing violent conflicts in the Philippines. The bulk of the items were donated by Korean churches. In the background stands the tent where the Lumads are camping out near the capitol grounds in Malaybalay. Photo courtesy of Dan Ela.

"They are living in tents in the capitol ground. And the capitol is somewhat annoyed already due to the inconvenience they are causing to the park. But the government is struggling in dealing with their demands," he said, adding that the group is fighting for their ancestral claims.

"They were also frightened of the killings. They fled because their leaders were killed when they tried to stop gold mining," Sison said. “Their farm lands were grabbed by companies. Leaders who are protectors of their lands are the casualties, those people in the camp are asserting for their ancestral domains.”

"About 85 families are staying at the camp. A baby was born in the camp and the baby did not survive the cold temperature and the discomfort," said the Rev. Rey Sombilon, superintendent of Zamboanga Peninsula District.

Juan offered prayers for the bereaved family of the baby. He said the baby’s illness was aggravated by lack of food and cold weather. Last month, another baby died at the camp. 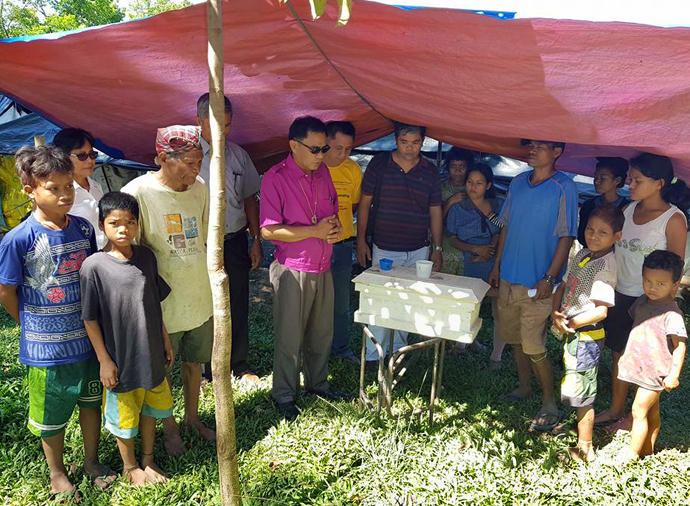 Bishop Rodolfo A. Juan (center in pink shirt) prays with the bereaved family of a baby who was born — and died — at a camp for displaced in Malaybalay, Philippines. The camp in northern Mindanao was set up after an outbreak of violence against Lumads (indigenous peoples). Photo courtesy of Dan Ela.

The Rev. Recto Baguio, superintendent of Bukidnon District, said that in addition to the 85 families at the camp, another 400 people from two municipalities of San Fernando and Cabangsalan — areas where people have suffered harassment  — received aid from United Methodists.

"Our UMC members pooled their used clothes, rice and money. Medicines and other resources come from the bishop's office," Baguio said.

The group took gifts to wounded and hospitalized soldiers at the hospital at Camp Evangelista in Cagayan de Oro City and distributed bottled water and medicine at the Mapandi Memorial Center.

"We gave 7,000 bottles of distilled water and medicines for marine officers and policemen and women,” the bishop said. "We also gave 120 pairs of pajamas for wounded and hospitalized soldiers and police." 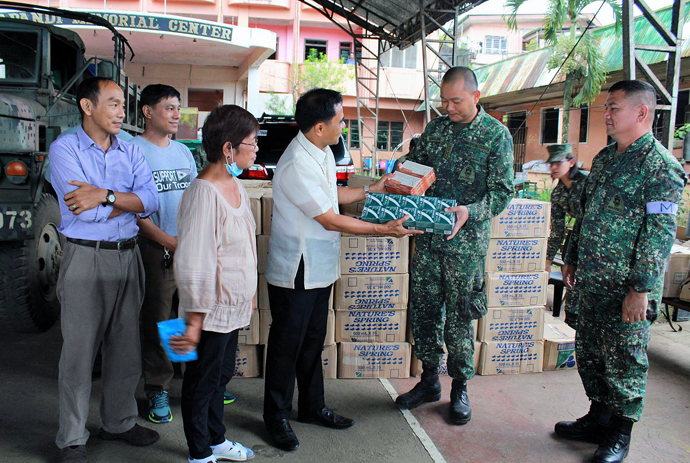 Bishop Rodolfo A. Juan (third from right), along with other clergy and lay people, distributes water and medicine to Marines. Photo courtesy of the Rev. Capt. Eduardo Copliting.

"The United Methodist Church has various agencies and ministries that can extend more lasting help to Lumads and other internally displaced persons,” he said.

Ela said an intentional and integrated approach is needed to deal with the concerns of the displaced. He said that could include a feeding program, training for parents on homes and community health and wellness, and help with getting ready to return home.

He said it could also include help with facilitating negotiations between the military and armed groups to establish Lumad communities as peace zones.

Sison said that the Rev. Roger Porquillo, a retired district superintendent who is now residing in one barangay (village) of Malabalay helped the Lumads establish a cooperative to make turmeric tea and tablea, a chocolate-like tablet to sell. 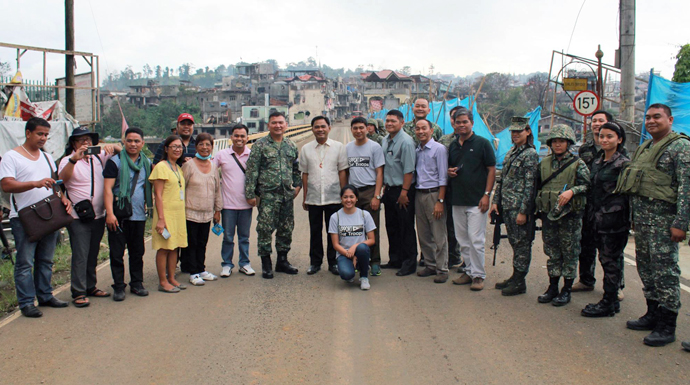 A United Methodist mission team stands at the Mapandi Bridge where the fiercest battle between government troops and the Maute happened. Photo courtesy of the Rev. Capt. Eduardo Copliting.

Ela said that the church has the capability and capacity to provide medical and other help, especially for children, nursing and pregnant women and the elderly.

Baguio said that minority groups are severely affected by the violence in remote areas of Bukidnon.

"Because they stay in the mountains, they are the ones greatly affected by the battle. They persist to live in peace. Land, forest, mountains and rivers are their life," he said.

Baguio lamented the ongoing violence, emphasizing that nobody wins in war.

Communicators for The United Methodist Church in Africa and the Philippines share what the church is doing in their regions to stop the spread of the novel coronavirus.
Social Concerns

United Methodist theologians from Africa and Asia gathered to discuss their interpretations of the Bible and find common ground.