Filipino United Methodists living outside their homeland were inspired and transformed as they participated in local mission work during the 16th National Association of Filipino-American United Methodists Convocation 2018.

After 30 years of existence, the convocation in Manila was the first held outside of the United States.

The Philippines Central Conference, the Manila Episcopal Area and the Central United Methodist Church of Manila participated in the historic gathering in January, dubbed “BalikBayanihan 2018.” 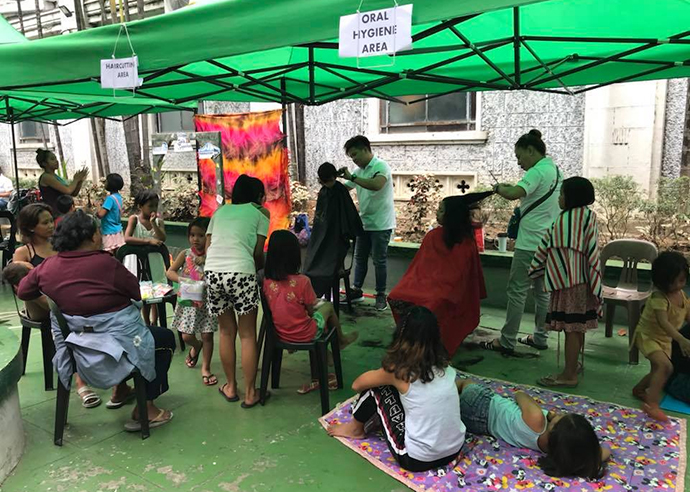 Ministries for and with street children were among the featured missions during the gathering.

Ellen Dizon, an active deaconess from the California-Nevada Conference and president of the Harris Memorial College Alumni Federation, expressed her joy in attending the gathering and participating in a ministry to serve families during a Community Family Health and Wellness event.

“It was a great joy to have served the street children through the Asuncion Perez Memorial Center during the (convocation). We would like to continue to be in partners with their mission and share God’s love and blessings,” she said.

“I was blessed and inspired by their mission. My son and I will continue to challenge our church through vacation Bible school to do mission with the street children.”

Liza Cortez, the director of the Asuncion Perez Memorial Center, said the health and wellness event was part of the convocation to allow delegates to connect with the community.

"We had family planning and personal hygiene for community mothers and women. Storytelling, oral hygiene for kids and hair cutting open for every member of the family for free,” she said. 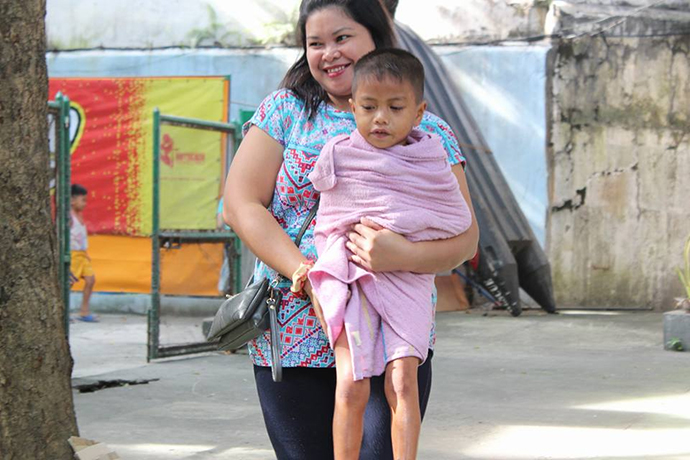 A volunteer carries a child after his bath at Central United Methodist Church in Manila, Philippines. During the church’s Ligo Land ministry, volunteers help bathe about 40 children each week. The kids get new clothes and enjoy snacks and stories in the church. Photo courtesy of Aquilino Javier.

Another ministry held in conjunction with the convocation was Ligo Land, a weekly event in which Central United Methodist Church volunteers gather about 40 street children who live in the church’s vicinity.

“Ligo” means bath or shower in Filipino. The children gather in the yard of the church for a bath and clean clothes.

“We give each child a bath and this is done every week,” said Ruth Arichea, a volunteer for the Ligo ministry and wife of retired Bishop Daniel C. Arichea Jr.

“After the bath, volunteers are ready to fulfil their assigned tasks: dry up the child with the towel, comb their hair … clean the ears, cut their fingernails, and give them clean and new clothes. Then, each child will be given his or her snacks. The child will take a nap and after that, a story is waiting for him or her.”

Arichea said many extend help by providing new towels and clothes for the kids.

Aquilino Javier, former president of the National Association of Filipino-American United Methodists, said that the mission component of BalikBayanihan was raised considerably at the 2018 event, with delegates taking up a special offering after participating in the mission work.

"These street children were allowed in the church after receiving clean clothes to sing and thank the people. The young people were recognized,” he said.

The Rev. Edgar De Jesus, lead pastor of Davis Street United Methodist Church in Burlington, North Carolina, and newly elected president of the association, said he was inspired and transformed by the “perseverance, joy, creativity and resilience” of the Filipinos.

"My entire experience at (the National Association of Filipino-American United Methodists) Convocation 2018 can be summed up as life-giving, inspiring and transformative. The sights, the sounds, the smell and the taste … brought a vibrant spirit of ‘BalikBayanihan’ throughout my stay in the Philippines.

"I witnessed a growing and thriving (United Methodist Church) in the Philippines. I learned the aspirations of Filipinos and their sense of inner joy and peace that made their witness in church and society vibrant and robust.”

De Jesus said that he was moved by the mission initiatives of churches and community-based organizations “who are engaged in eradicating poverty, oppressive systems and social injustices” affecting the Filipino people.

“I was moved especially when I heard several mothers giving powerful testimonies on the circumstances surrounding the extrajudicial killings and human rights violations,” he said.

Filipino President Rodrigo Duterte launched a “war on drugs” after taking office in June 2016. The campaign has claimed an estimated 12,000 lives of primarily poor urban dwellers, including children, according to Human Rights Watch.

In her keynote address, the Rev. Elizabeth S. Tapia, a United Methodist missionary and professor, challenged everyone to respond to human suffering.

"Proclaim the good news of the Kingdom of God, respond to human needs, seek to transform unjust structures of society, strive to safeguard the integrity of creation, renew the life of the Earth," she said.

Reflecting on the meeting and his new role in leading the association, De Jesus said, “The Filipino United Methodist Christians are in diaspora and spread across the world. I witness their love for God and their commitment to be in mission and ministry wherever they are.”

Although churches are closed, United Methodist pastors in Africa and the Philippines are reaching out to members with devotional guides for at-home worship and daily words of encouragement.
Mission and Ministry

Philippines Conference Cavite endorses and sends on to the 2020 General Conference two proposals for the future of The United Methodist Church.