When tiny Sabine Pass United Methodist Church had its sanctuary and parsonage clobbered by Hurricanes Rita and Ike, many church groups came to the rescue, and no one sent more volunteers than the North Texas Conference.

Now Sabine Pass United Methodist – which averages 18 in Sunday worship – has made an impressive repayment on that bread cast upon the waters.

The coastal Texas church quickly raised and delivered $4,000 and a box full of gift cards to the North Texas Conference’s relief fund for victims of the tornado that raked Garland and Rowlett, Texas, on Dec. 26.

“They were there for us, so we felt God was leading us down their path, to help them,” said Cheryl Snider, 67 and a lifelong member of Sabine Pass United Methodist Church. 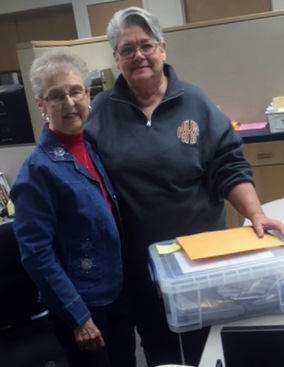 One who learned of the gift was Harry Andreason. As a member of the First United Methodist Church of Garland relief group God’s Old Geezers, he made a dozen trips to Sabine Pass to help the church and community rebuild.

“It doesn’t surprise me a bit,” said Andreason, now a Geezer emeritus, of the Sabine church’s gesture. “They’re fine folks down there.”

Sabine Pass, near Beaumont, Texas, was hard hit by both Hurricane Rita in 2005 and Hurricane Ike in 2008.

The Rev. Kitty Key was pastor of the Sabine Pass United Methodist Church for 11 years, including during both hurricanes, and gets emotional talking about the church groups that came from all over the country to help.

Among many, the North Texas Conference stood out.

Indeed, a follow-up email from her included a long list of specific efforts by North Texas Conference churches and the conference itself – everything from debris removal to construction to fundraising to putting on the community’s Easter party one year.

With all that in mind, Key and Snider recently collaborated on contributing to the North Texas Conference relief fund, and Snider spread the word on Facebook.

Scattered former church members contributed, including a woman in Anchorage, Alaska, who sent her gift by Federal Express to make sure it arrived in time. Local individuals and groups not directly affiliated with the church, including the Sabine Pass Lions Club, chipped in.

Key had a trip planned to North Texas for Jan. 7, and delivered the funds and gift cards, taking time to tour some of the damaged areas.

“The damage in Rowlett is unbelievable,” she said.

The pastor of the First United Methodist Church of Rowlett, the Rev. Jan Davis, has found herself preaching about the disaster, as well as overseeing her church’s efforts to help affected members and the broader community.

It’s been a stressful time, but she’s been cheered by the outpouring of financial and volunteer support – including the gift from Sabine Pass United Methodist.

“My heart is truly touched by the amazing generosity of the United Methodist connection — churches like Sabine Pass United Methodist who understand the heart of disaster when it strikes a community and then give back with such generosity. That is beautiful!”