Those two actions are the most important things people of faith can do to get the U.S. budget crisis resolved without hurting the most vulnerable around the world, he said.

Speaking on the morning after he was arrested with 10 other faith leaders, Winkler said, "We felt that we needed to do something dramatic to illustrate that people of faith want this crisis resolved."

Several faith leaders, including Winkler, have been in conversation for the past several months as they saw the budget crisis looming and recognized it could mean cuts to many programs that assist the poor.

The group wrote a document, Circle of Protection, outlining why there is a need to protect programs for the poor. The group's members have also written letters and met with the president and members of Congress, Winkler said, but were feeling increasingly frustrated that those needs were not being heard.

"What brought us together was a realization that this impending crisis over the debt limit was largely a manufactured crisis," he said. Trying to make cuts to programs that assist the poor, elderly, inner-city youth and others was unacceptable to the faith leaders.

Even if all the money is cut from programs that assist the poor, there still would not be enough money to resolve the crisis, Winkler said.

President Obama has said the $14.3 trillion debt ceiling must be raised by Aug. 2 for the country to pay its bills on time. The President urged Americans to call and email lawmakers to demand compromise.

That is something Winkler also recommends. Members of Congress pay attention to the phone calls, email and letters they get every day, he said. "They are scared to death of running into a firestorm or an uprising from people back home. They count on people back home not particularly caring or paying attention or for feeling like they are helpless." 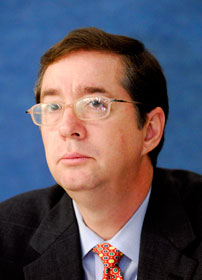 "All the members of Congress are themselves part of our religious traditions. Congress is filled with Christians, Jews and Muslims, and there are times when their own faith leaders need to speak to them," Winkler continued. "I think that is kind of a trite argument and an obsolete argument that people of faith have no place in the political arena."

Many elected leaders also need prayers for wisdom and courage, he said. They are "trapped in party politics" trying to figure out how to score political points against the other party.

The staff of the Board of Church and Society will continue working with other faith groups as they watch what happens in the next few days. Since July 11, the front lawn of The United Methodist Building in Washington, D.C., has been the site for daily prayer vigils focused on a "faithful budget."

Winkler was one of two United Methodists in the group of 11 arrested July 28 in the U.S. Capitol as they refused to stop the public prayers asking the Obama administration and Congress not to balance the budget on the backs of the poor.

The Rev. Bob Edgar, a United Methodist elder and president of Common Cause, a national advocacy group, also was arrested during the "faithful act of civil disobedience." Edgar, who served as a Pennsylvania congressman from 1975-87, organized the protest and invited leaders in the faith and civil rights community to join him in a rally and prayers inside the rotunda. The arrests were made around 1 p.m., and the group was freed by approximately 7:30 p.m.

Faith leaders arrested in US Capitol during protest