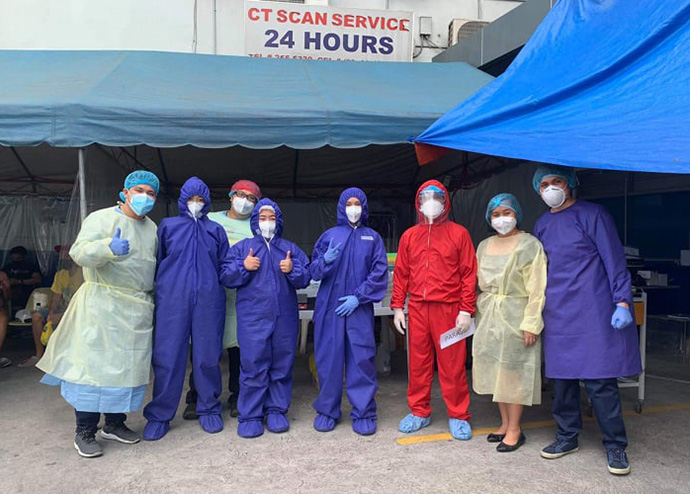 Dr. Glenn Roy V. Paraso (pictured in red) and other front-line workers are pictured outside United Methodist Mary Johnston Hospital in Manila, Philippines, in the early days of the coronavirus pandemic. Paraso contracted COVID-19 in August and was admitted to the hospital for a month. Photo courtesy of Dr. Glenn Roy V. Paraso.

Several Filipino United Methodists, including some on the front lines, credit God and their faith with helping them triumph over the coronavirus.

“COVID-19 was life-threatening, but God’s love and faithfulness was lifesaving,” said Dr. Glenn Roy V. Paraso, executive director and CEO of United Methodist Mary Johnston Hospital in Tondo, Manila. He spent a month in the hospital after contracting the virus in August.

“The many ‘what-ifs’ were tossing relentlessly in my mind as faith was trying to overcome fear. The first week was the worst, as my difficulty breathing was not responding initially to treatment. It was then that I realized that these could be my final days,” he said.

Paraso said being alone and unable to physically talk to anyone was an additional anxiety.

At one point, he was in acute respiratory distress, but he began to see some progress after receiving convalescent plasma and a high dosage of antibiotics.

Paraso said he also believes prayers helped him to recover.

“Prayers and the comfort of the Holy Spirit took over. It was when I was confirming and affirming his sovereignty over this disease where I believe the turning point was,” he said. “God’s hand was on the doctors and the nurses as well as those of our church members who prayed.”

The Philippines is among the 20 countries with the most COVID-19 cases, reaching 373,144, according to the Philippines Department of Health and Johns Hopkins University’s virus tracker. The country has become the center of COVID-19 in Southeast Asia. Its capital, Manila, recently extended its strict lockdown.

“In the deepest throes of sickness and despair, I can only cling onto God and his infinite grace and mercy. No amount of money, fame or earthly possession could buy me an extra life. It is by God’s grace that I am still alive today,” said de Pano.

He doesn’t know how he was infected, although he often interacted with people while working from his favorite coffee shop. He started having symptoms in March.

“After much prodding from my wife, I got admitted. I officially became patient 955 in Philippines’ COVID-19 statistics,” de Pano said.

“Aside from getting excellent care from the medical staff, and the unwavering care of my wife, I felt the prayers of so many people. I knew God was not done with me yet. By his mercy, I got well.”

When he was released from the hospital, de Pano — director of the Revive 1,200-voice choir — received a musical send-off from his medical team featuring “Lead Me Lord,” a song he composed.

The Rev. Maritez C. Cruz, associate pastor of Knox United Methodist Church in Manila, contracted the virus, as did her husband and daughter. She said the outpouring of prayers from all over the Philippines was their greatest weapon against COVID-19.

“People I did not know or people I only met once sent me private messages and text messages, assuring me of their concern for my predicament. My faith served to strengthen me in that lonely hour,” she said.

Cruz said she minimized the virus. “I thought that I would not be infected because I was continuing my work in the Lord’s vineyard.”

Then, she and her husband were turned away at local hospitals.

“My husband and I started going to several hospitals hoping to be tested and admitted. I only realized the gravity of COVID-19 when no hospital would accept us because there was no room,” she said.

She was admitted with the help of friends and a relative who is a doctor. Her husband and daughter were admitted at two different hospitals.

“We should not take it for granted that just because we are church workers, we are protected from COVID. Take the necessary precautions, not for one’s self but for others as well,” Cruz said.

Dr. Neki Soriano, health board coordinator for the Davao Episcopal Area and a member of Southern Isabela Medical Center’s COVID-19 task force, said that hope in God is the only thing that has kept him alive after contracting the virus.

“Each morning, I would open my phone. I listened to hymns to remind me to hope in God. I would read prayers of healing from family, friends and church communities,” said Soriano, who is the son of retired Bishop Leo Soriano.

Soriano recalled it was not only physically draining but also emotionally, mentally and spiritually stressful.

He said hearing the beep of the ventilator in the next room contributed to his anxiety.

“When my neighbor (in the hospital) did not make it, it was a mental and emotional stress. Even if I am a clergy, I was in a spiritual crisis,” he said.

Soriano said he worried about dying and leaving his family.

“I turned to God; I realized my mistake. For the longest time, I was trying to make myself physically able to fight the virus. God was out of the equation,” Soriano said. “God is the only one who heals and restores, not me. I realized I should surrender all to God.”

Wilfred John P. Pronto, a post-graduate medical intern at the Lung Center of the Philippines and lay member of Camp Tinio United Methodist Church, said overcoming the illness was difficult, but his faith got him through.

“God reminded me of his love during the times when I felt so weak, lonely and helpless. He has been there for me all throughout my battle. He lifted me from the dark place I was trapped in,” he said.

Pronto said he was infected when the pandemic was just beginning and didn’t know if he would survive. While being isolated in his hospital room, the son of a pastor and deaconess said that God’s mercy was his companion.

“Never lose heart and faith in God. Even if we couldn't see the end of the tunnel yet, we are still blessed by God's faithful love. But also, let's do our fair share to help put this pandemic to an end.”

The Rev. Leyda Balaquidan-Yambot, spiritual health officer at Mary Johnston Hospital, told United Methodist News that being near the triage area of the hospital has been difficult.

“There, I find myself raising hands in prayer of intercession asking and declaring for God’s mercy of restoring life and healing. Many times I find myself shedding tears in prayers asking for God’s comforting embrace to them who feel the excruciating pain of loss and grief,” she said.

The Rev. Francis Fajardo, chaplain of Wesleyan University General Hospital, said he and other front-line workers hold thanksgiving services for those who recover, while also dealing with their own fears.

“Every day is a battle because of the anxieties that one day we will contract the virus,” he said.

The Rev. Myra Maxwell, co-pastor of Trinity United Methodist Church in south Philadelphia, also heads up victim support services for the district attorney’s office. She’s already walked in the steps of many of the people she counsels, as a crime victim herself.
Social Concerns

United Methodists receive and share Jesus' promise of abundant life even and especially in the face and aftermath of death.
Global Health