A new era in European Methodist relationships began with the signing of the Community of Methodist and Wesleyan Churches in Europe Agreement.

Church leaders from across the continent signed the agreement in a formal ceremony on Sept. 10 at a short service at Wesley’s Chapel, London. 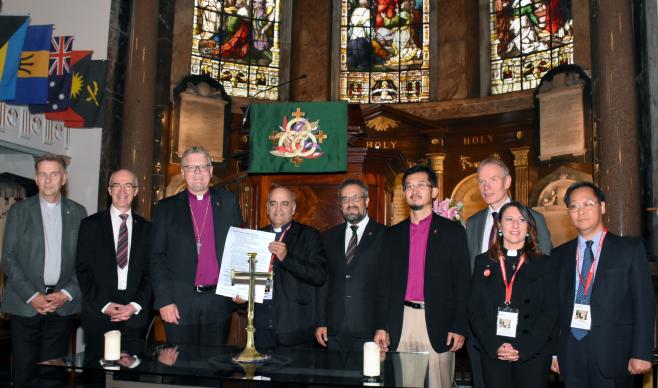 In a ceremony in Wesley’s Chapel, London, on Sept. 10, the leaders of the member churches of the European Methodist Council signed a Community Agreement. The agreement expresses the commitment of the individual churches to join together to fulfill the purpose of the European Methodist Council to enable a stronger Methodist witness in Europe. Photo by Üllas Tankler, courtesy of the General Board of Global Ministries.

Member churches of the European Methodist Council had wanted to strengthen their relationships with each other by living in community. The agreement was approved at last year’s council meeting in Porto, Portugal, and later ratified by the governing bodies of the member churches.

Various European churches already have bilateral and multilateral agreements or both with other denominations, but this is the first such agreement between Methodist, Wesleyan and Uniting Churches in Europe.

As a community of separate churches, each with their own unique and shared traditions, doctrines and church discipline, the agreement seeks to strengthen the churches’ relationships with each other and to celebrate and affirm each other’s baptism and administration of the Eucharist, as well as the validity of their respective ordinations and ministries (including authorized lay ministries).

The agreement commits the participating churches to “fuller participation in God’s mission and ministry, through prayer and deeds, and through finding ways for further co-operation,” including the sharing of resources “where applicable and beneficial.”

Signatories to the agreement

The co-chair of the European Methodist Council, Bishop Christian Alsted of The United Methodist Church, said that the signing was a significant development.

“Our signing of the Community Agreement of Methodist and Wesleyan Churches in Europe is a genuine expression of the connexional nature of the Wesleyan movement and heritage, which stretches across denominational boundaries, and the signing marks a significant development in our relationship in the Methodist, Wesleyan and Uniting Church family in Europe,” said Alsted, who leads the Nordic-Baltic episcopal area of The United Methodist Church.

He said that the agreement offered a “robust foundation for us to continue to deepen and strengthen our relationship in ministry and mission across Europe and in the world.

“In an increasingly fragmented global society we as Methodist, Wesley and Uniting Church people find our commonality in our rich heritage in Christ and our combined call to the ministry of reconciliation. While there appears to be a move in Europe towards exclusivity and wall-building, we are called to build bridges and to be reconcilers and peace-makers embracing the richness of unity in Christ in the midst of diversity and even tension,” Alsted said.

“As we continue to deepen our understanding of and participation in the mission of God, the Holy Spirit will give us the courage and strength to take new and greater steps into the future, being faithful to who we are and what Christ has called us to be.”

The secretary of the British Methodist Conference, the Rev. Gareth Powell, said the signing of the agreement was “a reminder of the common heritage we share as Methodists in Europe.

“It enables us to work together as the people called Methodists in the task of proclaiming the mercy of God,” he said. “We have signed this agreement as a reminder of our commitment to each other at a time of considerable uncertainty in the European family.

“I hope it will enable us to share more deeply in the task of being God’s people,” he said.

Faith leaders cite a lack of commitment by European nations to either refugees or their local hosts.
Evangelism

New church building in Debrecen, Hungary, has already been used for Pentecost and vacation Bible school.
Mission and Ministry

European and Eurasian churches are reopening after many shut their doors because of the coronavirus.