"If we made an effort, we could end hunger in America in five years," Beckmann said.

But we cannot do it on our own, he cautioned. Hunger and poverty advocates must work with Almighty God to get serious about overcoming poverty so everyone around the world can share in the kind of abundance the United States takes for granted.

Beckmann spoke last fall to the annual Lake Junaluska Peace Conference about the many ways to fill empty bellies. Bread for the World, a United Methodist partner, is a Christian advocacy group dedicated to educating the public and urging U.S. decision-makers to end hunger at home and abroad.

Hunger-relief advocates should do all they can to build political commitment for programs that strengthen poor people, he told the group.

He said Bread for the World is working hard to encourage the U.S. Congress to prioritize protection for the poor regardless of how they cut $1.2 trillion from the budget over the next decade.

With a sour economy that has no end in sight, teamed with what he termed "dysfunctional politics," Beckmann said people in the United States are discouraged right now.

But, he urged people to take heart. Across the globe, relief efforts the United States has made over the past several decades are paying off.

Ticking off a list of places that have seen dramatic improvement -Bangladesh, Ethiopia, Ghana, Mozambique, Brazil and more -Beckmann cited a "huge change for the better" when it comes to poverty, disease, hunger and women's rights. He sees this as a great exodus in our time.

"The God we know is inviting us to get with the program," he told the crowd.

"The thing I am most sure about is that God listens to a mother who can't feed her kids," Beckmann said. "If God is anywhere, God is with that mom and that kid who is not getting enough to eat. And if anything is sacred in this world, it's doing what we can to change that situation so she can feed her baby."

Calling his talk "Bread for the World 201," Beckmann zeroed in on key strategies United Methodists and people of all faiths can do to scale back and eventually eradicate hunger and poverty. 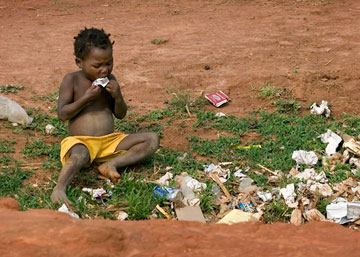 A child scavenges for food in a garbage pit near Malanje, Angola. Advocates working to end hunger say enough food is produced globally to adequately feed everyone around the world.
A UMNS photo by Mike DuBose.

But he said Americans have not tried hard enough to make a sustained effort to stamp out hunger on U.S. soil.

"We haven't had a president since Lyndon Johnson for whom poverty was a top priority," Beckmann said. "So why are we surprised we haven't been able to reduce poverty?"

He added: "You don't have to make poor people more poor to reduce the deficit."

Beckmann also encouraged those present to join Bread for the World and help its efforts, get their congregations involved with changing the world for the Lord, and become hunger-relief leaders in their communities.

And most importantly, he urged people to open their hearts and congregations and families more fully to the grace and love of God.

"The abundance we have is not just all this stuff&ellipsis . The real abundance we have is the &ellipsis overflowing goodness of God that we all experience," Beckmann said. "In our church, in our living, in our nation, the proclamation of God's love&ellipsis in Jesus Christ is integrally related to our quest for social justice.

"There's got to be an understanding of God's love so that social justice and peace flow out of that experience of God's love and grace."

*Connor is editor of the South Carolina United Methodist Advocate.