By the start of 1956, Elvis Presley and his recording career had found a new place to dwell. It wasn't at the end of Lonely Street, but in a building bustling with Methodists.

Presley at that point had only regional hits to his name. The giant RCA Records had gambled on the young singer and bought his contract from the small Sun Records.

The sounds of the South — rhythm & blues, country and rock — were starting to transform American airwaves. However, RCA did not yet have a studio of its own in the burgeoning "Music City" of Nashville. Instead, the record company leased studio space in a building it shared with the Methodist Church's Television, Radio and Film Commission — one of the predecessors of today's United Methodist Communications.

So it was that on Jan. 10, 1956 — two days after his 21st birthday — Presley arrived at the Nashville studio at 1525 McGavock St. for his first recording session with his new label.

The session would prove one of the most momentous in Presley's career. It was also a highlight in a little-known chapter of Methodist Church history — when the denomination's communications agency shared its office and studio space with a major record label.

The future King of Rock 'n' Roll got off to a somewhat rocky start with RCA, recounts Scotty Moore, Presley's guitarist and first manager, in his autobiography "That's Alright, Elvis."

Overseeing his first session at the Methodist building was legendary guitarist Chet Atkins. At the time, Atkins was both a staff guitarist and producer for RCA. He eventually would head the label's Nashville operations.

That was not all right with Presley, who pulled Stoker aside and said he would insist all four Jordanaires be part of his next RCA session. Atkins, for his part, had his doubts about Presley's talent. Stoker later recalled that Atkins had said "the kid from Memphis ... he's a passing fad."

Despite Presley's and Atkins' mutual suspicions and some early bumps, Moore said that the actual recording session went relatively smoothly. Atkins even sat in on guitar.

Other musicians at the Methodist building

Elvis Presley was not the only famous musician to record at 1525 McGavock St. when it was shared by RCA and the Methodist Church's communications agency.

RCA shared facilities with the Methodists from January 1955 to late October 1957, said John Rumble, senior historian at the Country Music Hall of Fame and Museum.

Among the popular songs recorded there:

RCA had chosen the studio because it allowed the record label to bring in its own engineers and custom-designed equipment, Rumble said. Most of the musicians - including Presley - recorded at night, recall people who worked for the Television, Radio and Film Commission.

Interactions between the Methodist and RCA staff were minimal. But Edie Loveland, who worked on the commission's switchboard in the summers of 1956 and 1957, recalls meeting the Everly Brothers when the duo came to record.

RCA, by the late 1950s, also needed more space for the number of artists it was signing.

Ultimately, Atkins and Steve Sholes, who had signed Presley to RCA, succeeded in getting the record label to leave 1525 McGavock St. and purchase a studio of its own in 1957. The result was RCA Studio B, which offers tours and still hosts recording sessions today.

It's now or never

Altogether, Presley and his band cut five songs over two days — a cover of Ray Charles' "I've Got a Woman," "I Was the One," "Money Honey," "I'm Counting on You" and, most famously, "Heartbreak Hotel."

"Heartbreak Hotel" was the creation of songwriters Mae Boren Axton and Thomas Durden. According to oft-repeated music lore, the songwriters took inspiration from a newspaper article about a man who had committed suicide and left behind a note that said, "I walk a lonely street."

Moore recalls that Atkins and an engineer created "Heartbreak Hotel's" forlorn-sounding echo effect by adding a delay to Presley's vocal and re-recording the song in an office hallway with a speaker at one end and a microphone at the other. Atkins kept out any curious Methodists with a sign on the door that said, "Don't open the door when the red light is on."

Still, as Moore tells it, the RCA executives in New York were uncertain any of Presley's Nashville material would sell.

Moore suggests that the record executives ultimately decided to go with a little less conversation and a little more action because Presley and his band were about to make their national television debut.

On Jan. 27, 1956, RCA released the single "Heartbreak Hotel" with "I Was the One" on the flipside. The next night, Presley appeared on CBS' "Stage Show," which was produced by Jackie Gleason and hosted by big band leaders Tommy and Jimmy Dorsey. His rendition of "Shake, Rattle and Roll" drew squeals of delight.

On Feb. 11, he finally performed a brassy version of "Heartbreak Hotel," along with "Blue Suede Shoes," to an enthusiastic audience during what was his third of six appearances on the show.

By then, the single was on its way to selling more than a million copies. By that spring, it hit No.1 on the Billboard pop and country charts and No. 5 on the R&B chart.

Many teens could not help falling in love with Elvis Presley.

Presley and his band — now with a gold record to their names — returned to the Methodist building on April 14 for another Nashville recording session.

RCA still had not brought in the entire Jordanaires quartet as Presley had requested. The group would join him later that year. With the same configuration of backup singers as before, a frustrated Presley managed to record only one song, a ballad titled "I Want You, I Need You, I Love You." 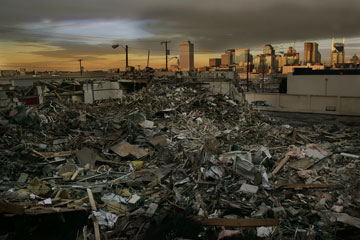 Rubble remains after the demolition of the studio once owned by the Methodist Church's Television, Radio and Film Commission at 1525 McGavock St. in Nashville, Tenn. The demolition was complete in 2006. A web-only photo courtesy of The Tennessean/John Partipilo.

After that session, Elvis left the building for good — but not without leaving something behind.

Lyman White, who was a film editor with the Television, Radio and Film Commission for 20 years, shared the story.

During one of his recording sessions at the building, Presley left a package at the receptionist's desk but departed without ever retrieving his package.

When the receptionist finally opened the package, she found a pair of pants, White recalled. The receptionist eventually wrote to the popular television game show "I've Got a Secret" with the secret that Presley had given her his pants.

"What happened was, they wrote back and said, 'Your secret is not acceptable,'" White said with a chuckle. "It was too risque for that time period."

You're the devil in disguise

Presley himself soon would prove too risque for some audiences. On June 5, 1956, he gyrated into newspaper headlines across the United States with a blistering performance of "Hound Dog" on NBC's "The Milton Berle Show."

His pelvis-shaking performance left many church folk all shook up. A headline in the national Jesuit magazine America warned "Beware of Elvis Presley."

Later that summer, Moore recounts, a juvenile court judge warned Presley he would be charged with "impairing the morals of minors" and jailed if he tried his hip-swinging antics at a Jacksonville, Fla., concert. Under the watchful eye of police, Presley stood still that night.

But the accusations distressed him. "I don't do no dirty body movements," he told a reporter.

What happened to the building?

In 1959, the Methodist Church's Television, Radio and Film Commission bought the building at 1525 McGavock St.

However, its successor, United Methodist Communications, in 1981 sold the building and moved to its present location, 810 12th Avenue South. In 2006, the auto dealership that owned the property had the old studio demolished to make way for a parking lot.

Clients include other United Methodist agencies, conferences and congregations as well as secular organizations and musicians. The main requirement is that any production must be in keeping with the denomination's social teachings.

Retired Bishop Melvin Talbert, who was the same age as Presley, was among his fans.

"I think African-Americans looked at him and said, 'Hey, that white boy is doing well with our music,'" Talbert said. "I personally had no difficulty with him. He was doing his own thing. ... What I've discovered is our music is not just our music. It belongs to the world."

The controversy Presley's dancing sparked was long forgotten by the time Phil Arnold joined the Television, Radio and Film Commission in 1967.

"There was this excitement that Elvis recorded here," said Arnold, who is still a sound engineer on contract with United Methodist Communications. "That was our calling card when people came in."

Though Presley was never himself Methodist, he had deep Christian roots. His parents met at an Assemblies of God church, and he grew up in the Pentecostal movement. The rock star took inspiration throughout his career from the music and practices of the church.

John Rumble, senior historian at the Country Music Hall of Fame and Museum in Nashville, said Presley would periodically join one of his friends in prayer.

So perhaps it is fitting he recorded his first big hit in a building shared with church work.

"Elvis may have been imperfect," Rumble said. "But he was certainly a believer."

This feature was originally published February 18, 2013