Unrest and an Ebola outbreak in East Congo have left many women without husbands, and children without fathers. United Methodist women from the Kivu Conference are stepping in to help.

The women in the Tabita Group have been called to help the poor and those in need, said the Rev. Omoy Wandjaka, who helped found the group.

“We are fulfilling our evangelical mission and fulfilling the Scriptures in Isaiah 1:17, which says, ‘Learn to do good, seek justice, protect the oppressed, reach for the orphan, defend the widow.’ And in Deuteronomy 10:18, ‘Who does justice to the fatherless and the widow, who loves the stranger and gives him food and clothing,” she said.

In the Kivu Conference, more than 200 widows are being served in the four districts: Goma, Uvira, Beni and Fizi. Wandjaka said the group is mostly helping with food for the families, but it plans to integrate other programs in the future.

She’s hoping to have volunteers teach the widows small trades, such as sewing, to help the women take care of themselves and their children.

“I thank the Tabita Group who gives us, every time, clothes and food. This is, for me, a consolation that the church is showing to me,” she said.

Many of the widows in Kivu lost their husbands to insecurity in conflict zones in Rutshuru, Masisi, Fizi and Beni, while others were widowed by the Ebola epidemic that continues to affect the country. 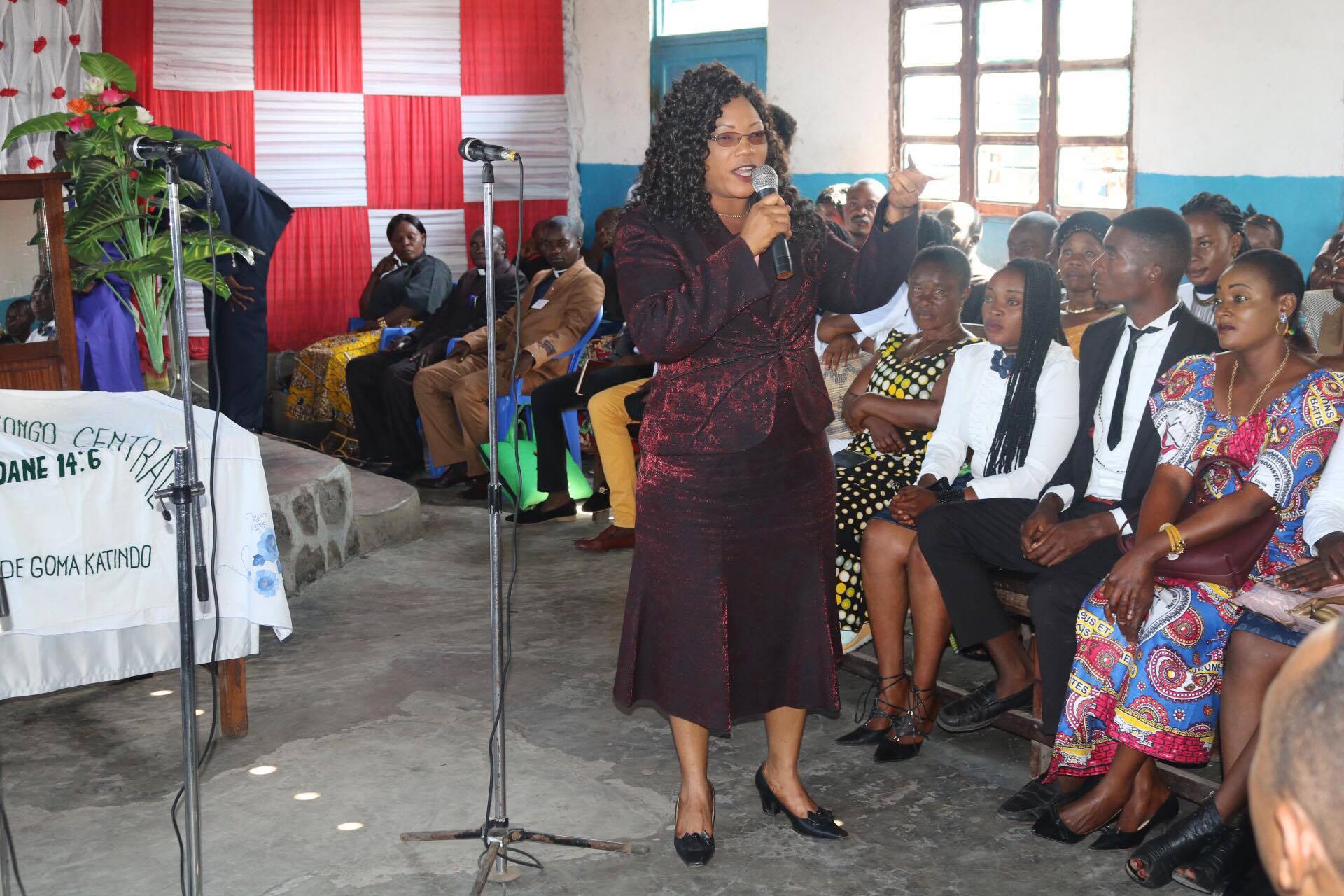 Therese Ndjovu speaks to members of the Amani Local Church at Goma in Kivu about efforts to help widows and children. Photo by Philippe Kituka Lolonga, UMNS.

According to the World Health Organization, there has been a “marked increase” in Ebola cases in the past several weeks. Since the epidemic began in August, more than 1,100 people have been infected and at least 740 have died.

This week, WHO reconvened a panel to consider whether the outbreak should be declared a “public health emergency of international concern,” which would ramp up the international response, according to Reuters.

The outbreak and insecurity in the region are making it more difficult for the Tabita Group and others to do their work in the affected areas, Wandjaka said.

The Rev. Veronique Mwayuma, coordinator of United Methodist Women in East Congo, congratulates the women of the region for these acts of charity toward families in need.

She said Bishop Gabriel Unda is very sensitive to the matter and intervenes in the care of widows and orphans in the region.

Unda said he was orphaned at an early age and was also widowed himself, so he is especially concerned about the care of widows and orphans.

“The supervision of people in this category remains our major concern. I follow loan activities organized by the Tabita group in the Kivu Conference, precisely in Goma, ” Unda said.

He added that the training classes will enable the women to “meet the needs of their families.”

Mbilizi Bonane, president of United Methodist Women and the Tabita Group in Bukavu, also arranged for the women to bring food to prisoners in March as part of family month. She said Scripture leads the women to be in ministry with the marginalized.

“I will always accompany the prisoners by bringing help and also the Gospel for this category of people so that they can change and become new to society,” Bonane said.

Wandjaka said she prays for peace to be restored throughout the region and for the Ebola outbreak to end soon so that the activities of the Tabita Group may be effective everywhere.

“Once peace is restored and the Ebola epidemic ceases to spread throughout the region, I want to lead a general mobilization for our actions to be effective in the most remote areas,” she said.

Bishop Jones removed from SMU board

The Rev. Diane Dyson, a United Methodist deacon, experiences fear and fulfillment as health care worker in the pandemic.