The United Methodist Church in East Congo continues to have a heart for orphans in the region.

Since 2012, the church has been taking orphaned children under its wing at Kindu United Methodist Orphanage, which has more than 100 orphans in its care.

“In the beginning, the orphanage started with 22 children, but today, we are supervising 104, of whom 98 are staying with host families," said Furaha Tshoso, head of the orphanage.

The church tries to place children with foster families as quickly as possible.

“When they are in foster care, children can sometimes forget that they are orphans, because they can stay and play with other children,” Tshoso said.

The orphans range in age from 5 to 25. The younger children attend school, while the older ones learn job skills such as sewing, baking, soap making and carpentry.

Philomène Nyande, who supervises the children at the orphanage, said that teaching them trades is a way for the church to prepare them for adult life and financial independence.

“Thanks to the apprenticeship of the few trades, adult orphaned children managed to become financially independent and provide for their (younger) brothers and sisters,” she said. 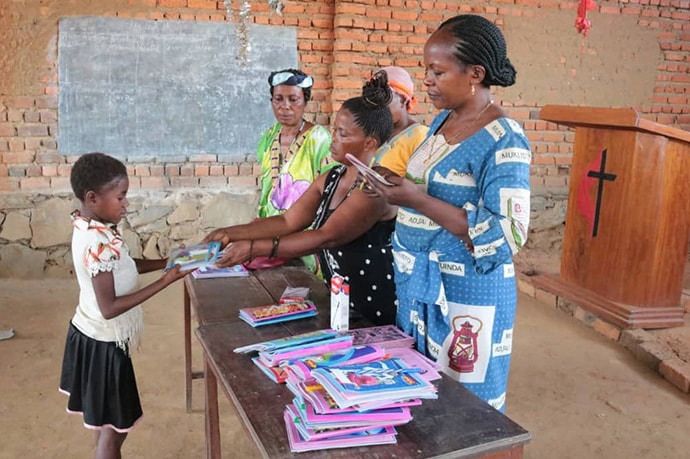 Tshoso said the orphanage doesn’t have the money to buy the newly trained young people their own tools at the end of the training, but they are able to earn money through the skills they’ve learned. The hope is that they can save enough to open their own workshops, she said.

The church also offers health care and psychological support to the children.

“Some young children do not understand the death of their parents. They have trouble digesting this, hence the need to provide psychological support. We talk to them about what happened. We encourage them to pursue life by studying,” Tshoso said.

She said the East Congo Episcopal Area cares for the children through local means and financial support from the United Methodist Board of Global Ministries and the Tennessee and Memphis annual conferences.

“Under the leadership of Bishop Gabriel Yemba Unda, we mentor these children to enable them to have a bright future. That's why the church provides their schooling and supports their needs,” Tshoso said.

Members of First United Methodist Church in Martin, Tennessee, have been helping to provide scholarships for the orphans since 2014. The Memphis Conference church has a partnership with the East Congo Episcopal Area.

“Our church has been in relation with East Congo for several years,” said the Rev. Randy Cooper, pastor at First United Methodist Church. “We have donated money for scholarships for schoolchildren for over five years. I am sure we have provided more than 100 scholarships … People need to know that $50 can send a child to school for a year.”

He said his church also has provided money to build eight churches in the East Congo Episcopal Area, and this summer, members are raising money to build two more.

Nyande said that apart from schooling and psychological care for the orphans, the home also organizes entertainment and fellowship activities.

“We organize banquets to allow the children to have fun and show them that they have a family in Christ despite what has happened to them. We share meals together to show them our brotherly love,” Nyande said.

Enoka Ndjadi Lubwende, 21, is one of the orphans supported by the United Methodist Orphanage.

“I have been an orphan of father since 2006. I suffered a lot after the death of my father and I had to give up my studies and resume with a lot of difficulties. My father's family had to take everything we had.”

When Lubwende was in his third year of high school, he was placed in foster care after his mother remarried and her new husband rejected the teenager.

The orphanage helped him continue his studies and he’s currently in his third year at the Higher Institute of Education in Kindu studying geography and environmental management.

“We will have a lot of work to do for orphaned children,” Lubwende said. “As God has given us the grace to be cared for, we also plan to give other orphans a chance.”

His story is similar to that of the dozens of other children in the United Methodist orphanage.

Hemedi Ndjadi, 17, has been a part of the center for three years.

“My father died in an accident when I was 12 years old. I stayed with my mother who died two years later. I live with a member of the church who has agreed to host me. I did not succeed at school, (so) I preferred to come and learn carpentry to prepare me in life,” he said.

Donations to Kindu United Methodist Orphanage can be made through Advance #15138N.

The orphanage reached an agreement with a local woodworking shop where he is being taught how to manufacture lounge chairs. He hopes one day to open his own workshop.

Ali Mbaruku, who is teaching Ndjadi, said he has become a good carpenter.

“Hemedi is learning fast. I am sure he will be a great workshop manager,” Mbaruku said.

“The Methodists have already brought me two other young people like him. Hemedi teaches them quickly. He already knows how to make chairs and is still learning about upholstery.”

The Rev. Celestin Lohalo and his wife have been raising another orphan, 9-year-old Henriette, as their own daughter.

"My daughter does not know that we are not her biological parents. We consider her our own daughter. One day maybe, we will tell her the truth about her parents, but for the moment, we do not want to disturb it,” he said.

“Orphans are in the category of people whom God defends. Widows are part of it, too. It is in the Book of Deuteronomy. The Lord God recommends us to give even tithing to this category of person. If you do that, God will repay you to the cent,” he said.

Londe is a communicator for the East Congo Conference.

Helping children during the COVID-19 crisis

Sheltering in place is confusing for children accustomed to daily contact with friends and teachers. Church leaders offer advice on how to help them cope.
Mission and Ministry