United Methodist theological education in the United States is in crisis, and a longtime scholar says if trends persist the modern way of training pastors could disappear altogether.

The Rev. M. Douglas Meeks sounded that alarm at a meeting of nearly 40 theology professors and United Methodist scholars to discuss the future of theological education Feb. 26-28 at the Scarritt Bennett Center in Nashville.

“There is a great shortage of people who will be the teacher of the teachers,” said Meeks, Cal Turner Chancellor Professor of Theology and Wesleyan Studies at Vanderbilt University Divinity School. He was one of the organizers of the conference.

“Whenever we have a search for a president, a dean or a faculty member in our theological schools, the lists are miserably short,” he told the gathering.

The event brought together representatives from most of the denomination’s 13 U.S. seminaries as well as Vanderbilt, Asbury Theological Seminary and Hood Theological Seminary, an African Methodist Episcopal Zion school in Salisbury, North Carolina. Also on hand were staff members from the United Methodist Publishing House and the denomination’s Board of Higher Education and Ministry.

Meeks said he fears U.S. United Methodists could end up like the Methodist Church in Britain, which no longer has any theological schools to call its own and must depend largely on ecumenical relationships for clergy training.

“I think the situation is so severe that we are going to have to do some imaginative thinking about what the future can be for theological education,” Meeks said. 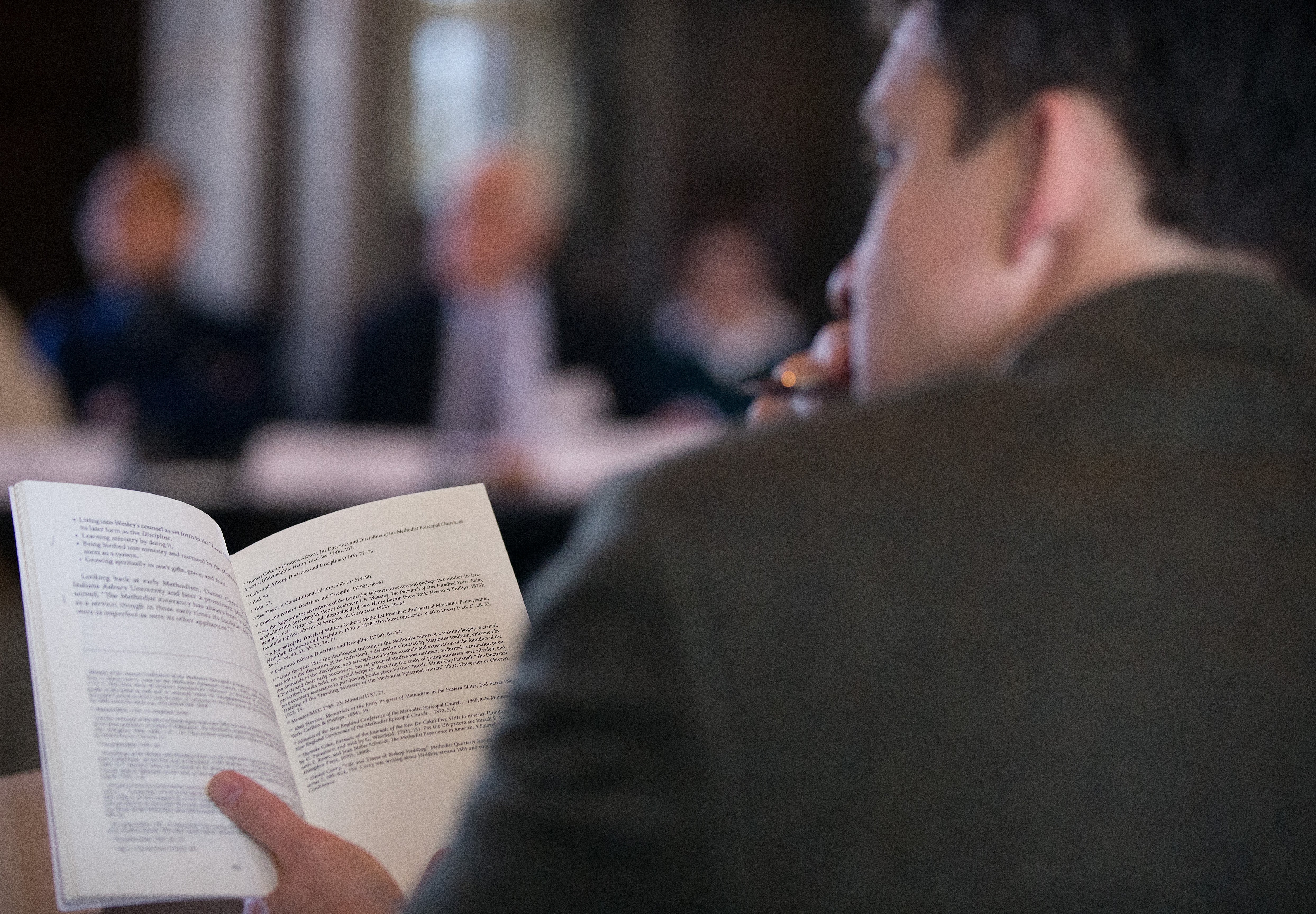 Attendees read from the book "Formation for Ministry in American Methodism," by the Rev. Russell Richey during a panel discussion on theological education at the Scarritt Bennett Center in Nashville, Tenn. Photo by Mike DuBose, UMNS

Too many adjuncts, too few openings

Meeks spoke to an intergenerational group that included long-tenured professors and recent Ph.D. recipients struggling to make a living as theological instructors.

Their experiences show that the pipeline for United Methodist professors has some serious clogs.

Some of the younger scholars juggle multiple courses as adjunct instructors at universities while also teaching courses of study for licensed local pastors. Others serve in a local church and take whatever additional teaching posts they can find.

“I’ve worn about a thousand hats in the last five years in the struggle to find — we won’t use the word gainful, we’ll just say stable — employment in the profession for which I’ve been trained,” said Hayden, the father of three.

A big part of the problem, Meeks and other conference speakers said, is that over the years, universities have responded to financial downturns by reducing the number of full-time faculty positions.

Universities increasingly rely on far less expensive adjuncts — who work on contract with no health or retirement benefits — to fill the breach.

More than half of all U.S. faculty members now hold part-time, contingent appointments, reports the Chronicle of Higher Education.

An adjunct’s heavy course load — sometimes at multiple institutions — leaves little time to complete the sort of original, unremunerated research that could open doors to a tenure-track, financially stable position.

Also there is often a mismatch between scholars’ theological specialties and the kind of professor a seminary is seeking, the Rev. Russell E. Richey told United Methodist News Service. Doctoral students, for instance, may be encouraged to focus on the Old Testament. But by the time they graduate, the only openings are for specialists in the New Testament.

Richey is a visiting professor at Duke Divinity School and former dean of Emory University’s Candler School of Theology.

“If you go several years without landing something, you sort of get blemished,” he said. “It’s just hard to coordinate the entry of graduate students and their maturation five years later with openings.”

“What does United Methodist theological education look like for those who are beginning as scholars? Disorienting and exhausting,” said the Rev. Tim Eberhart, now an assistant professor of theology and ecology at Garrett-Evangelical Theological Seminary and Methodist Theological School in Ohio.

He said younger scholars need to be “adaptive, entrepreneurial and innovative” in where and how they teach. For example, he found success with a course that combined both face-to-face and online interactions and was both for clergy candidates and community lay members.

Aspiring scholars also face challenges distinctive to the United Methodist system. Presian Burroughs, an assistant professor at United Theological Seminary, noted that some conference boards of ordained ministry don’t know what to do with elder candidates who feel called to the academy rather than local church ministry and so put up roadblocks.

The Rev. Carolyn Davis serves as a full-time policy analyst for the progressive think tank Center for American Progress and as an adjunct faculty member at Wesley Theological Seminary. She told UMNS the statistics show most scholars her age and younger will not go on to full-time, tenured academic careers.

However, she suggested, theologians can find different ways to follow God’s call. She pointed out that aspects of the work — research, teaching, writing and service — also exist outside the academy in ways that still allow for service to the next generation of church leaders.

She has found her current position lets her use her research expertise and work toward equipping religious communities for social justice. It also supports her continued contributions to United Methodist theological education such as her visit to the conference, she said.

“Sometimes you have to give up the dream to find the vocation,” she said.

Meeks and other conference participants aren’t ready to give up on the basic framework of United Methodist seminary education just yet. But they said it may be time to rethink some aspects of the system.

Other ideas for theological education could come from United Methodists in Africa and the Philippines, who face their own challenges, or from Methodism’s past.

Richey pointed out that clergy training has evolved multiple times since Methodism's arrival on American shores more than 200 years ago.

He gave an overview of his new book “Formation for Ministry in American Methodism: Twenty-first Century Challenges and Two Centuries of Problem-Solving.” Methodist clergy, he said, were at first largely self-taught in the works of John Wesley, and then they underwent apprenticeships under a more senior pastor. But as time went on, the Methodist movement required more formal education, eventually developing the seminary program expected of elders today.

Each change came after what Richey called “negative pressures.”

“It seems that at almost every stage, there was some really pressing problem the church sensed it needed to solve,” Richey said. “But at each stage, the church also saw fresh opportunities.”

Correction: The story now correctly spells the name of the Rev. Tim Eberhart, an assistant professor at Garrett-Evangelical Theological Seminary and Methodist Theological School in Ohio.