Note: This is the fifth of a six-part series on Meharry Medical College and the work it is doing to end health-care disparities. 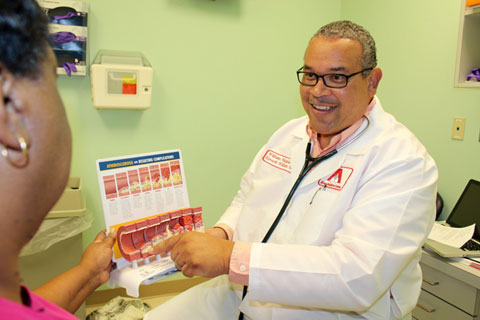 A doctor with a remarkable family tradition at Meharry Medical College in Nashville, Tenn., credits the United Methodist-related school with nurturing his dedication to improving health care in a poor Mississippi rural community.

The dedication of Dr. Kenneth Williams is so profound that, despite great expense and significant obstacles, he bought a much-needed hospital in tiny Holly Springs in northern Mississippi, just to keep the hospital from closing. Now he is building a medical campus there.

Plans for the campus include a new hospital, a health and wellness center, a fitness trail and, Williams hopes, a school for allied health professions to go along with a 25,000-square-foot medical clinic and outpatient-services building that opened in 2008.

Williams graduated from Meharry in 1986, but his five-generation Meharry family tradition goes back to a great uncle in 1911. It includes his great-grandfather, grandfather, father, brother and other relatives. Now Williams' niece, Lauren Thompson, is a first-year Meharry dental student, and his daughter, Schuyler, now a straight-A undergrad student, has expressed interest in attending there. "I'm not pushing her," he confides, "but I'm hopeful."

One of two historically black medical schools in the United States, the 135-year-old institution was started by the Methodist Church to educate freed slaves after the Civil War. Today, it is one of 11 historically black colleges and universities supported by the denomination through its Black College Fund.

"Part of the beauty of Meharry," Williams said, "is that, in addition to excellent training, it instills character and teaches students to understand and have compassion for people in small towns and rural areas, people who are too often neglected by other health-care providers."

The Moss Point, Miss., native returned to his home state in 1989, after completing residency training at Wayne State University Hospital in Detroit. He first worked in a government clinic in northern Mississippi. Then. he was recruited to open a practice at Marshall County Hospital, operated by Methodist Hospital System in Holly Springs. A year later, Methodist Hospital decided to close the underperforming hospital and move operations to nearby Memphis, Tenn.

"They wanted me to move to Memphis," Williams recalled, "but the relationship I had built with patients was so special, I just couldn't leave. The people here were wonderful, and they really showed their appreciation of me." 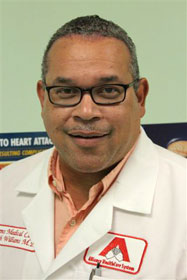 Several new investors tried to keep the hospital going but failed. "When I saw no other buyers stepping in, I knew I had to," Williams said. "It was in a poor location, poorly managed and had a bad reputation; but I couldn't let it close. Too many people were depending on it."

The fledgling physician was doing "good business" at his own clinic and had just opened a second site. However, buying a failing hospital and taking on nearly $1 million in personal debt, with no help from other investors, was an unexpected, risky challenge.

"It was scary," he recalled. "When I told my wife, she looked at me like I was crazy. We had five daughters to raise."

He called on his uncle, Perry Williams, who had years of hospital administration experience.

"There were tons of hurdles to clear, but we did it," said Kenneth Williams. They improved the hospital's appearance and services, adding obstetric and pediatric medicine, treatment for sleep disorders and outpatient services.

Through a partnership with the City of Holly Springs, Williams' Alliance Healthcare System has since acquired 32 acres in a more accessible location to build a full medical campus. They began with a clinic in 2008 that reports 30,000 patient visits a year. Plans include construction of a $34 million, 40-bed hospital, followed by a $6.8 million health and wellness center with a fitness trail and a school of allied health to offer training for certification in nursing and paraprofessional medical fields.

"We should be five years further down the road than we are," said Williams, lamenting the 2006 government changes in Medicare with the advent of Medicare Advantage Plans. He believes the changes benefited insurance companies but hurt health-care providers, especially rural and underserved providers and hospitals. With a large older-adult, low-income clientele, Medicare accounts for up to 70 percent of the hospital's business.

"We had moved out of the red column when I took over the hospital in 1999 into the black after about two years," remembered Williams. "But we lost a huge chunk of income in 2006, even though we had the same number of patients. I had to lay off staff. I went from smiling to crying. We've been trying to climb back ever since."

Alliance Healthcare System expects to reach its 2006-budgeted goal of $9 million for the hospital this year. However, it faces other challenges, including competition for insured patients from a proposed new hospital in a wealthier, neighboring county. Many Marshall County residents lack insurance and depend on Medicaid, which pays health-care providers less than private insurers.

Nevertheless, Williams remains committed to providing affordable health care in one of the poorest counties in the state, which ranked last in a 2005 study of the top 20 health indicators.

"We are here because we want to make this community a better place and improve the health of the people," he said.

Williams, who is rare if not unique as an African-American physician and sole owner of a hospital, remembers encountering racial prejudice as a child in the 1960s and as a young doctor starting out in Holly Springs.

"Today I have white, black and Hispanic patients," he said. "But my real passion is to help black men because they are at the bottom in education, health care and most other (quality of life) categories. We have to stop making excuses and do more."

*Coleman is a freelance writer from Laurel, Md.