A newly launched distance learning center will help train future leaders of The United Methodist Church and connect its Mozambique Annual Conference to the rest of the world.

After three years of planning, the Africa Training and Learning Center was dedicated March 31 as a satellite campus of Africa University, a United Methodist-related school in Zimbabwe. The center is housed in the church's Mozambique conference offices in Maputo.

"This day is very significant as it marks a stage in the growth of the university," said Fanuel Tagwira, the university's interim vice chancellor.

Rolling out educational programs through the distance learning center is "a major departure to the traditional ways we have been delivering higher education in the last 16 years of our existence," Tagwira said. "The development in information and communication technology has provided opportunities to advance learning to more people than ever before."

The United Methodist Church in Mozambique has 160,000 members in more than 170 congregations. "The center is something which comes to fulfill a dream which I had together with others when starting Africa University," said Mozambique Bishop Joao Somane Machado as he opened the dedication ceremony.

With an illiteracy rate of nearly 60 percent in Mozambique, the impact of the center as an empowerment tool will help "individuals be what they are called to be," Machado said.

The classroom has 20 new computers, with plans to expand in the future. Classes from Africa University will be beamed to the Maputo site via VSAT (Very Small Aperture Terminal), a two-way satellite ground station with a dish antenna.

"The early missionaries embarked on the brick-and-mortar type of education, and The United Methodist Church is now embarking on a mission which goes along with the 21st century way of communication," said Martin Dwomoh-Tweneboah, a consultant to Africa University's Internet technology department. "I think (the center) is a project which will make the church activities unique in terms of spreading the Gospel of God."

The center will enable Africa University to connect with potential students in Mozambique who are now without access to traditional learning. It also will offer affordable higher education to people in diverse geographical locations and environments.

Church and university leaders hope the Training and Learning Center can be duplicated in Angola, the Democratic Republic of Congo and other African countries.

"This center comes at the right time when demand for higher education is increasing," said Venture Mufume of the Africa University Alumni Association in Mozambique. "We welcome this initiative. Education is an essential human right and it is not for the privileged few."

Since Mozambique's native language is Portuguese, curriculum was developed at the Methodist University in São Paulo. Enrollment will begin with about 40 students divided into morning and evening sessions, and students will learn in their native language. In addition to an online executive MBA program and a course in English as a second language, classes will be offered in theological education and public health. Future classes will focus on public administration, accounting, agriculture and nursing.

The center will help students who came from Africa University continue their studies because economics makes participating in post-graduate programs in Mozambique a challenge, according to Delfina Monteiro, a 2006 theology graduate of Africa University and a member of the financial staff of the Mozambique Annual Conference. 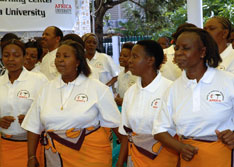 The Liberdade United Methodist Church choir sings at the dedication.

Access to education is a key component to freeing people from poverty and disease and bringing about change in the lives of the people in Africa, according to Ken Yamada, a Higher Education and Ministry staff member. He called the center a "vital investment" to help Africa University fulfill its mandate of serving people in all countries of Africa.

Sandra Nobre, representing Mozambique's Ministry of Labor, said the center of professional training has the potential to help alleviate poverty and illiteracy in that country.

Machado agreed that the center will be a major resource to educate church members and the citizens of Mozambique and assist with the fight against hunger, poverty and disease.

He applauded the university's desire to duplicate the distance learning model in other parts of Africa and allow students to learn in their native languages. When a non-English speaking student enrolls at Africa University, for example, the student must first spend a year learning that language. "But if they learn their lessons in Portuguese, this will give them also the confidence of working hard, of making such effort because they know very well the language," he said.

"It is a way of reaching out to people who have been marginalized for so long," Mudambanuki said.

University to use distance education in health department

Mozambique: A Land in Contrasts

United Methodist Board of Higher Education and Ministry