Families praying for relief from deportation got none when a U.S. Supreme Court ruling that would have shielded as many as 5 million undocumented immigrants died in a deadlock 4-4 decision.

The ruling was on an executive action taken by President Barack Obama in 2014 that would have allowed parents of citizens or of lawful permanent residents to apply for a program that would shield them from deportation and provide them with work permits. 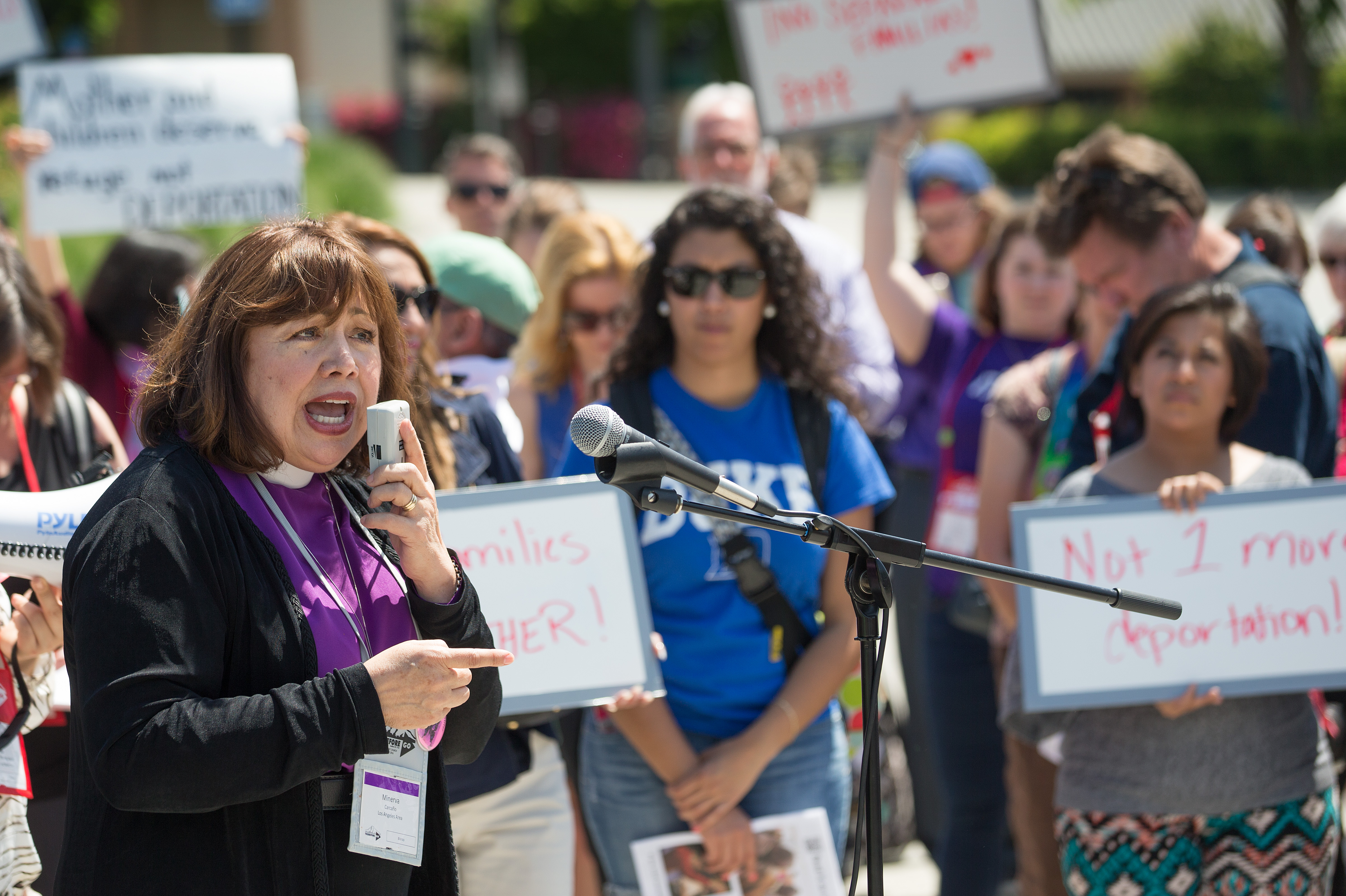 Bishop Minerva Carcaño addresses a rally of Methodists in support of immigration reform at the Convention Center Plaza outside the 2016 United Methodist General Conference in Portland, Ore. File photo by Mike DuBose, UMNS

“Separating children from their parents is immoral and is contrary to the teachings of Jesus Christ and The United Methodist Church,” said the Rev. Susan Henry-Crowe, top executive, United Methodist Board of Church and Society, and Bishop Elías Galván, executive director, Metodistas Representando la Causa de los Hispanos Americanos, in a joint statement.

“We remain committed to education and advocacy efforts that support our sisters and brothers who flee violence and terror and are in search of a better life.”

“The court’s 4-4 indecision means that President Obama’s executive actions, which were announced in November 2014 and have been tied up in the lower courts since early 2015, cannot go forward at this time,” said Rob Rutland-Brown, executive director, National Justice for Our Neighbors, a United Methodist network that offers free legal services to undocumented people.

“This leaves our immigrant neighbors in fear of being separated from their parents, children, and family,” he explained. “This indecision denies many immigrants the opportunity to work lawfully, drive, or to truly become part of our American society.”

Upon hearing the court’s ruling, Christ Foundry United Methodist Church in Dallas, immediately convened a press conference and a prayer journey to show unconditional support for the families of undocumented immigrants and to affirm the church’s disagreement with the ruling. Read the story in The United Methodist Church's Hispanic news.

The United Methodist Church officially is in “support of just and fair immigration policies that benefit and allow the family to preserve and maintain its unity” (2012 Book of Resolutions, “US Immigration and Family Unity”).

The General Conference, the denomination’s lawmaking body, approved a resolution affirming the president’s executive action during its May 10-20 meeting in Portland, Oregon.

“Welcoming the Migrant to the U.S.” called the action to halt deportations a “necessary temporary step that allowed certain groups of immigrants to apply for temporary legal status, though not citizenship.” Acknowledged that legislative change is “the permanent step that is needed.”

Rutland-Brown said his organization would continue advocating for immigration reform.

“Our network will continue assisting with the 2012 DACA (Deferred Action for Childhood Arrival) cases, which are not affected by today’s ruling,” he said.