If Jesus had been married, don't you think Paul or the biblical Gospel writers would have mentioned it?

That's the question many Christians have raised after the announcement by Harvard Divinity School professor Karen L. King of a fourth-century papyrus fragment in the Egyptian language Coptic that includes the phrase: "Jesus said to them, my wife."

Some scholars already have raised concerns that the fragment - which is of unknown provenance - could be a forgery meant to look like something 1,700 years old.

But even if it is authentic, King and United Methodist scholars of early Christianity are quick to emphasize that the discovery offers no evidence about the historical Jesus. It does not prove Jesus was married.

For one thing, there's a greater distance between any fourth-century document from Jesus' day than between a document from ours and George Washington's. King speculates that the fragment she labels the "Gospel of Jesus' Wife" might be a translation of an earlier Greek text from the second half of the second century, but even that possibility puts it significantly later than Paul's letters and the biblical Gospels.

"Rather, the importance of the 'Gospel of Jesus's Wife' lies in supplying a new voice within the diverse chorus of early Christian traditions about Jesus that documents that some Christians depicted Jesus as married," says a draft of King's research paper to be published in the January 2013 issue of the Harvard Theological Review.

Still, this small piece of papyrus, no bigger than a cell phone, already has reignited an old debate about Jesus' marital status - one that long predates "The Da Vinci Code's" climb on the U.S. best-seller lists.

"I think we should take it very seriously as an example of debates going on in early Christianity," said Mark A. Chancey, a United Methodist lay person and professor of religious studies at Southern Methodist University in Dallas. He recently co-authored a book on the archaeology of early Judaism and Christianity, "Alexander to Constantine: Archaeology of the Land of the Bible."

"It gives us perspective on the debates we're having in our own day about who is suited in leadership roles in the church and who is regarded as worthy of having special insight. The particulars are different, but in their own way, these are still very live issues in our own church," he continued. "What we are seeing increasingly is that early Christianity was more diverse and less static than we often imagine."

Scripture and the historical Jesus 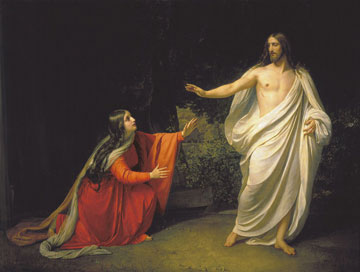 Christ appears to Mary Magdalene in this 1834 oil painting by Ivanov Alexander Andreevich located in The Russian Museum in St. Petersburg. A web-only public domain image.

The New Testament makes no mention of whether Jesus was married. Likewise, even previously discovered Gnostic gospels and other extra-canonical texts leave his marital status open to question.

As Chancey put it, the fragment is the first found that makes "specific mention of a Mrs. Jesus."

A number of scholars of the New Testament and early Christianity, including Chancey, find that silence telling.

"I think it is possible but unlikely that Jesus was married," said Mark Goodacre, associate professor of religion at Duke University in Durham, N.C. Goodacre has posted multiple entries on the find at his New Testament blog.

"We do hear about wives of key figures in the New Testament, including Peter and Jesus' brothers, but we never hear about Jesus' wife. Moreover, there were several Christian apostle couples who travelled together, like Andronicus and Junia, and Prisca and Aquila. So it is not like the early Christian texts are silent about husbands and wives overall."

"He was more than a little busy bringing in God's Kingdom, healing the sick, etc.," said Witherington, who is an ordained United Methodist elder and has a Ph.D. "Even when he goes home, say in Mark 6, there is no evidence he has his own house or family there. It's only his brothers, sisters and mother who are referred to as his family."

Ann Graham Brock, affiliate professor of New Testament at Iliff School of Theology in Denver, is not so sure. Brock studied under King and knows Coptic. She also is the author of "Mary Magdalene, The First Apostle: The Struggle for Authority."

"You would think that if Jesus had been married that the gospels would have been mentioned it, but on the other hand, you cannot always make an argument from silence," she said. "Just because it is not mentioned doesn't mean he couldn't have been."

The fragment mentions a Mary, though it's unclear whether the name refers to Jesus' mother or the later reference to his wife.

If it refers to the wife, King offers a familiar candidate - Mary Magdalene.

The Gospels of Mark and Luke identify her as a woman Jesus healed of seven demons. Luke lists Mary Magdalene with a group of women who support Jesus' ministry "out of their means." Nowhere in the New Testament is she identified as a reformed harlot.

The Bible shows Mary Magdalene as an important disciple of Jesus - the one witness to the Crucifixion and Resurrection in all four canonical Gospels. In the Gospel of John, she is the first person to share the news of the empty tomb.

Mary Magdalene is not named in Paul's letters or even in the Acts of the Apostles, the sequel to the Gospel of Luke. Ann Graham Brock, affiliate professor of New Testament at Iliff School of Theology, has shown that the greater the emphasis on Peter's role in a text, the more diminished Mary Magdalene's role tends to be.

However, more than a century after Jesus' time, she remained a popular role model of discipleship in extra-canonical texts such as the Gospel of Philip and Gospel of Mary. Mary Magdalene was likely the "foremost of Jesus' women disciples," Brock said.

With good reason, the Roman Catholic Church later designated her "Apostle to the Apostles."

Most scholars estimate that the earliest New Testament book was Paul's first letter to the Thessalonians around A.D. 50. The Gospel of John, the last of the four biblical gospels to be written, was probably composed around A.D. 90-100 (more than a half century after Jesus' ministry).

But, thanks to the preservation of the desert, scholars continue to find more accounts of Jesus' life that may originate in the latter part of the second century. These often reflect the philosophies and interests of various early Christian movements, such as Gnosticism, whose adherents claimed a special knowledge of Jesus or gnosis in Greek. King's papyrus fragment may been part of one of these traditions.

Based on its similarities to other second-century gospels, King speculates the fragment may allude not to the historical Jesus as much as second-century disputes.

Long before Christians started debating same-sex marriage, early church leaders were debating whether marriage itself was a good idea. Paul addressed this concern in Corinthians 7:28, noting "If you marry, you do not sin."

By the middle of the second century, extreme renunciation started growing more popular, and some Christians saw a life of celibacy as a higher spiritual calling. Gnostics themselves were often among the champions of asceticism.

Clement of Alexandria reported that some of his Christian contemporaries "say outright that marriage is fornication and teach that it was introduced by the devil." These Christians, Clement wrote, cited Jesus "who neither married or had any possession in this world" as a role model.

Clement took a more moderate view, approving of sexual intercourse in marriage but only for the purpose of procreation and only without passion.

King and others hypothesize that the reference to Jesus's wife may have been meant as a counterbalance to the trend toward monasticism.

"The papyrus is fragmentary, but here you have Jesus seemingly referring to his own wife and making a strong stand for the acceptability of marriage and the idea that you don't necessarily have to be celibate," Chancey said. "You also have a reference to a woman as a disciple, which is a title of great respect."

Joel B. Green, an ordained United Methodist elder and associate dean of the Center for Advanced Theological Studies at the evangelical Fuller Theological Seminary in Pasadena, Calif., raises another possible interpretation of the fragment.

"Jesus' reference to 'my wife' could be a metaphorical reference to the church. This would be a departure from texts that refer to the church as the bride (not the wife) of Christ, but this possibility ought to be considered," said Green, who was New Testament editor of the Common English Bible.

"This highlights the problem we have with interpreting this fragment," he said. "It provides us with no complete sentences, no paragraphs, no context at all. This means that anything we say about its meaning and significance is largely guesswork - educated guesswork, maybe, but guesswork nonetheless."

Would it matter if Jesus were married?

*Or alternatively: Mary is n(ot) worthy of it.

On the reverse side:

However, Green and other United Methodist scholars agree that if it ever were proved that Jesus had been married, it would not make much difference to United Methodist conception of Jesus as divine and human.

"We believe that Jesus shared completely in our humanity, and this belief wouldn't be changed at all were we to have proof that he was married," Green said.

Jim L. Papandrea, a Catholic layperson and assistant professor of church history at Garrett-Evangelical Theological Seminary in Evanston, Ill., said such a revelation might have some impact on Catholic theology.

"I think it would make a difference, in the sense that so much of the monastic life is based on the assumption that people who are called to voluntary celibacy are following in Jesus' footsteps," said Papandrea, author of "Reading the Early Church Fathers," from Paulist Press.

"If it could be proven that Jesus was married, that would call into question a part of the basis for religious orders, and perhaps for a celibate priesthood. However, I would be quick to add that the assumption that Jesus was unmarried is not the only justification for these things, so it's not as though the rug would be pulled out from under them, so to speak. But it would raise some discussion."

The Rev. Ryan Rush, pastor of First United Methodist Church in rural Carlisle, Ark., admits he is a bit disappointed that the fragment's discovery offers no such proof. If true, it might offer a chance to reflect more about the human side of Jesus and how Christians regard marriage, he said.

"The very fact that Jesus shares in our humanity 100 percent except without sin is pretty revolutionary."

*Hahn is a multimedia reporter for United Methodist News Service.

As a season for atonement and holiness, Lent is a perfect time for addressing the sin of racism.