"He descended into hell."

That's one possible explanation of what Jesus did between Good Friday and Easter.

For more than a millennium, Christians have uttered some version of that phrase as part of the Apostles' Creed. And for nearly just as long, theologians have wrestled with what the phrase means or whether it should be included in the creed at all.

Early Methodist hymnals omitted the phrase altogether. The 1989 United Methodist Hymnal includes the likely more accurate translation, "He descended to the dead," and mentions "descended into hell" only as a footnote.

But including any mention of descent in the creed says something about how Christians over the ages have come to understand God's saving work, say church scholars.

"It means there is no part of human existence to which Christ did not 'descend,'" said the Rev. J. Warren Smith, associate professor of historical theology at United Methodist-related Duke Divinity School in Durham, N.C.

"It's what it means for Christ to take upon himself ... the punishment of sin, which is death. If Christ really dies, then that means he (journeys) all the way to the place of dead."

What the Bible says

The Bible offers no clear answer on how Jesus spent the day and a half or so between his death and Resurrection, says the Rev. Ben Witherington III, New Testament professor at Asbury Theological Seminary in Wilmore, Ky., and an ordained United Methodist elder.

However, that didn't stop some early Christians from speculating and gleaning from Scripture all they could.

One big concern for the early church — and Christians to this day — is what happened to the Old Testament patriarchs and others who never knew of Christ.

A whole mythology arose about Jesus rescuing people from the netherworld after the crucifixion. The Gospel of Nicodemus, which dates to the third century and did not make the Bible cut, offers a narrative of Jesus retrieving Adam and other Old Testament figures from Satan's clutches.

Smith describes such imagery to his students as "Christ's commando raid on hell." It was a popular subject for medieval artists.

"What is going on here is Christian reflection on the doctrine of salvation only in Christ, and then trying to figure out where does that leave people who a) haven't heard about Christ or b) who lived before Christ," Witherington said.

That is a question that remains a source of debate for modern Christians.

1 Peter 3:19-20 offers a cryptic reference to Christ after death preaching "to the spirits in prison who formerly did not obey when God's patience waited in the days of Noah... ." 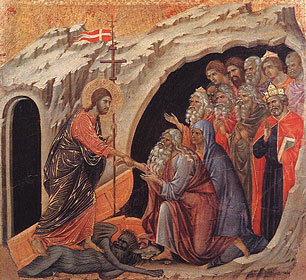 "The Descent to Hell," a tempera on panel by Duccio di Buoninsegna from around 1308, shows Jesus freeing Adam and other Jewish patriarchs from hell. The man with the bright golden crown and red robe is King David. A web-only public domain image.

Some theologians have interpreted this as Christ releasing Old Testament figures held captive by death. Witherington disagrees. He sees the passage as a clear allusion to the fallen angels who in Genesis 6 married humans in the days before Noah.

"He's declaring victory over the fallen angels on the way to heaven," Witherington said. "This is after the Resurrection."

Ephesians 4:7-10 also speaks of Christ ascending on high with a host of captives and insists that Christ also descended to "the lower parts of the earth." Just as with the passage in 1 Peter, interpretations of what this means have varied wildly. Smith reads it as an allusion to Sheol, the Old Testament abode of the dead.

The creed and John Wesley

The Apostles' Creed, which Roman Catholics and most Protestants use, first developed as an outline of faith for Christian converts to recite during baptisms at Easter.

The earliest known version of it dates back to fourth-century Rome, and it finally took written form in A.D. 800, said the Rev. Barry E. Bryant, associate professor of Wesleyan and United Methodist studies at United Methodist-related Garrett-Evangelical Theological Seminary in Chicago.

By the eighth century, the Apostles' Creed included the Latin phrase "descendit ad inferna," which literally means 'he went down to the spirits of the lower regions' and does not necessarily refer to the realm of eternal punishment.

Methodism's founder John Wesley sent mixed signals about the creed to American Methodists, Bryant said. Wesley removed Article III from the Anglican Articles of Religion, which read, "As Christ died for us, and was buried, so also is it to be believed, that he went down into Hell."

Yet he kept "he descended into hell" as part of morning and evening prayers, and "he went down into hell" as a part of the baptismal liturgy, Bryant said.

John Deschner's book "Wesley's Christology" says that because Jesus told the thief on the cross that the thief would be with Jesus in paradise (Luke 23:43), Wesley's view was that Jesus was in "paradise" between his death and his Resurrection.

By 1792, American Methodists dropped the phrase altogether from worship. The phrase "descended to the dead" returned in the 20th century. The ecumenical movement among Protestants and Catholics encouraged United Methodists and others to re-embrace traditions of the early church.

Many Christians over the centuries have found comfort in the creed's reference to the descent into hell, said Philip Clayton, a theology professor and administrator at United Methodist-related Claremont School of Theology.

"What God has done in Christ needed to be known to the entire universe," Clayton said.

"When I recite this in church, I think there is just no place where the encompassing love of God can't be present." - Philip Clayton

For early Christians, Christ's redeeming death and Resurrection needed to be proclaimed in the realm of the dead, just like everywhere else.

"To those in hell, his presence showed the final triumph of God, so that they would know they had chosen the wrong side," Clayton said. "And for those who could still turn, Christ's descent was a chance for them to do so."

Clayton, though, thinks this interpretation is a bit limiting of God.

For him, the line "he descended into hell" is a reminder of God's presence even in the darkest and most anguished of places.

"When I recite this in church, I think there is just no place where the encompassing love of God can't be present," he said. "There is no place where God is afraid to go."

And that is a hopeful reminder during the darkness of Good Friday as Christians wait for the joy Easter brings.

Attendees to the Charisma Revival conference pledged to aim for a ministry centered on cooperation and connectionalism, even amid such a divisive time for The United Methodist Church.