The United Methodist Church in the United States lost roughly the equivalent of the Memphis and Alaska conferences combined in the past year.

This snapshot comes from reports from 57 of the 59 U.S. annual (regional) conferences, which followed spring and summer gatherings.These totals are not yet official and could face a few adjustments, but the trend seems clear.

Yes, membership and worship attendance for the majority of U.S. conferences are still falling. The numbers continue a decades-long slide in U.S. church affiliation that extends well beyond The United Methodist Church. But these figures do not give the full picture of the denomination's presence in the United States, much less the global United Methodist Church.

Some United Methodist leaders across the United States tell a different story - and they have the numbers to back them up.

Globally, The United Methodist Church has been growing overall. The General Council on Finance and Administration, the denomination's finance agency, reported that in the five-year period ending in 2009, the denomination grew from almost 11.6 million to nearly 12.1 million professing members. GCFA plans to release updated official global figures in October.

Bishop Mike Lowry, who leads the Central Texas Conference, cautions that churches cannot rely on any one "silver bullet" for growth.

Among those factors is being in an area with a growing population overall. It also helps if the conference already includes churches with a weekly worship attendance that exceeds 1,000. However, church leaders are quick to point out that conferences in general can do more to help reach new people.

Lowry and leaders of four other conferences that experienced growth shared their insights on increasing vitality in the U.S. church. Their suggestions fit into four broad, interrelated categories: Sharing a vision, developing new churches, transforming existing ones and committing to evangelism. 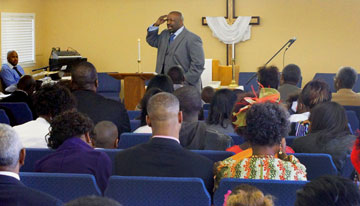 For the last three to four years, the Dakotas Conference "has placed an exclamation point on the mission of making disciples of Jesus Christ for the transformation of the world," said the Rev. Greg Kroger, the conference's director of ministries. "Conference efforts have given priority to ministries designed expressly to equip the local church in reclaiming and living out that mission."

"Even where worship attendance has not increased, more churches are holding steady, or the rate of decline has slowed," Kroger said. "In all cases, the importance of visionary clergy and lay leaders who are equipped and thoroughly committed to our mission cannot be overstated."

He advises each conference to clarify its vision and align resources for its "specific geographical, cultural and demographic context."

The North Georgia Conference posted an increase of more than 4,000 members in 2012, by far the largest numerical gain in the United States. Both Central Texas and North Georgia have reported membership increases for 39 consecutive years.

"The North Georgia Conference has a climate of expectation regarding membership growth in existing churches and creating new places for new people," said Bishop B. Michael Watson. "We are actively engaged in lay and clergy training to meet these expectations."

The Rev. Debby Fox, vice chair of the conference's board of connectional ministries, said one of the primary ways the conference provides training is through its Connectional Cafe, an online catalogue of 150 workshops for clergy and laity.

The workshops, intended to increase congregational vitality, are categorized into four areas of ministry - discipleship, leadership development, missions and worship. They include topics as varied as "Getting the Most out of Teaching the Bible," "Strengthening the Black Church" and "Homeless Ministries."

"I believe that active engagement in learning throughout our lives is essential to growing disciples, engaging them in ministry as they are gifted and called, and encouraging them to live in faith every day," Fox said. 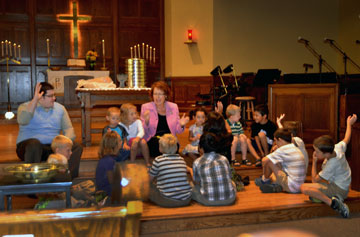 The Rev. Kathy Hartgraves instructs the children during the Aug. 4 worship at First United Methodist Church in Mitchell, S.D.
Photo courtesy of the Dakotas Conference.

Leaders of growing conferences agree that establishing new Christian communities is critical to vitality in the present and growth in the future.

"We are reaping the benefits of that work," he said. "Most conferences have added that position, but most didn't add it for another 20 years. We had a long lead on it, and it makes a huge difference."

Kroger of the Dakotas Conference said the local church with the largest increase in worship attendance is one of the newest - Embrace Church in Sioux Falls, S.D., founded in 2007.

His conference also has raised more than $250,000 for a ministry plan to reach out to the Bakken region of North Dakota, where an oil rush is drawing thousands of people to the area.

The plan's "multiprong approach of establishing support around existing congregations in the region, meeting human needs and creating new faith communities is grounded in the very healthy roots of United Methodism," Kroger said. "Our movement has always been strongest when we 'go to where the people are.'"

Even as he stressed the importance of planting new churches, Lowry urged United Methodists not to neglect renewing existing ones.

"It should not be either-or, but a both-and," he said. "One way to think about this is to understand that every existing congregation was at some point a new church start that somebody helped do."

U.S. bishops and other conference leaders tend to prefer worship attendance to membership as a gauge of church vitality.

Individual churches count membership differently - with some having stricter requirements than others. Conferences also vary in how strongly they encourage churches to clean their rolls. For example, Bishop Mike Lowry attributes the Central Texas Conference's consistent membership growth in part to the fact the conference historically has not had a culture of frequently removing people from the membership rolls.

Worship attendance "depicts a clear picture of who is in the 'house,'" said the New York Conference's Bishop Martin D. McLee.

Nevertheless, membership remains the only measurement used in allocating delegates to General Conference, distributing seats on the boards of many church agencies and determining the number of bishops in a jurisdiction. It is also one of the few metrics collected throughout the worldwide church, said Scott Brewer, the executive of connectional relations for the denomination's finance agency.

Whatever their preferred metric, church leaders agree that counting people is important.

Brewer has the task of reviewing the numbers submitted by conferences. He said the United Methodist tradition of keeping count reflects a core belief.

"If we truly believe that every person matters, then we should celebrate every member and every worship attendee as a sign of God's grace," he said, "and (view) every removal by charge conference action as a reason for mourning."

The New York Conference, which encompasses the New York City area and Connecticut, has been taking that approach, said Bishop Martin D. McLee. The conference's weekly church attendance was 34,512 in 2012, up 118 people since 2011. He credits that gain to the conference's efforts to form new faith communities and bolster already-existing churches.

"The emphasis on vitality statistics and metrics has been informative as we planned approaches to growth," McLee said. "We have examined worship with a focus on relevancy, style and changing demographics. Accordingly, many congregations have modified approaches to worship that have resulted in a more 'friendly' approach to the worship experience."

Lowry said he thinks just about every U.S. conference needs to recover an evangelistic thrust and spirit - a drive not only to invite people to church but also to give them a reason to keep coming back.

Evangelism, he said, should involve the message of salvation, which he described as "the rule and reign of Christ in one's life."

Bishop Cynthia Fierro Harvey, who leads the Louisiana Conference, shared a related point. The conference saw its worship attendance grow by 584 people to 30,596 in 2012.

"I believe our churches experience growth when they are relevant to the communities around them," she said.

"When we connect in significant ways, when we tell the gospel story, when we reach out and draw in, when we make a difference in the lives of people - it is then that we come face-to-face with the living God. It is then that we can transform not only their lives, but (also) ours, and the world."