General Conference planners last month denied a group’s request to have a display at the 2016 legislative assembly, saying the group was not in line with the church’s social teachings.

Since then, United Methodist leaders — some of whom had nothing to do with the decision — have fielded email boxes full of angry messages and threads of angry social media posts.

The Commission on General Conference has a vetting team to ensure exhibitors conform with the Social Principles, the denominational teachings contained in both the United Methodist Book of Discipline and Book of Resolutions. The Discovery Institute did not quite meet this test, a commission leader says.

“The commission reserves the right to refuse any potential sponsor if it, in its unfettered discretion, believes such sponsorship is inconsistent with the Social Principles,” said Judi M. Kenaston, the commission’s chair. The commission is a group of 25 clergy and lay volunteers from around the globe.

The application form for exhibitors notes this restriction.

John G. West, the Discovery Institute’s vice president and associate director of its Center for Science and Culture, acknowledged that United Methodists have a right to determine the occupants in their exhibit hall. But he called the decision “narrow.”

West said his group wanted a table to present information that would show science and faith aren’t in conflict and showcase the work of its fellows.

“It just strikes me as curious that a group that talks about design in nature, which is something that John Wesley discussed, is considered beyond the pale,” he told United Methodist News Service. “I think this is sad.” 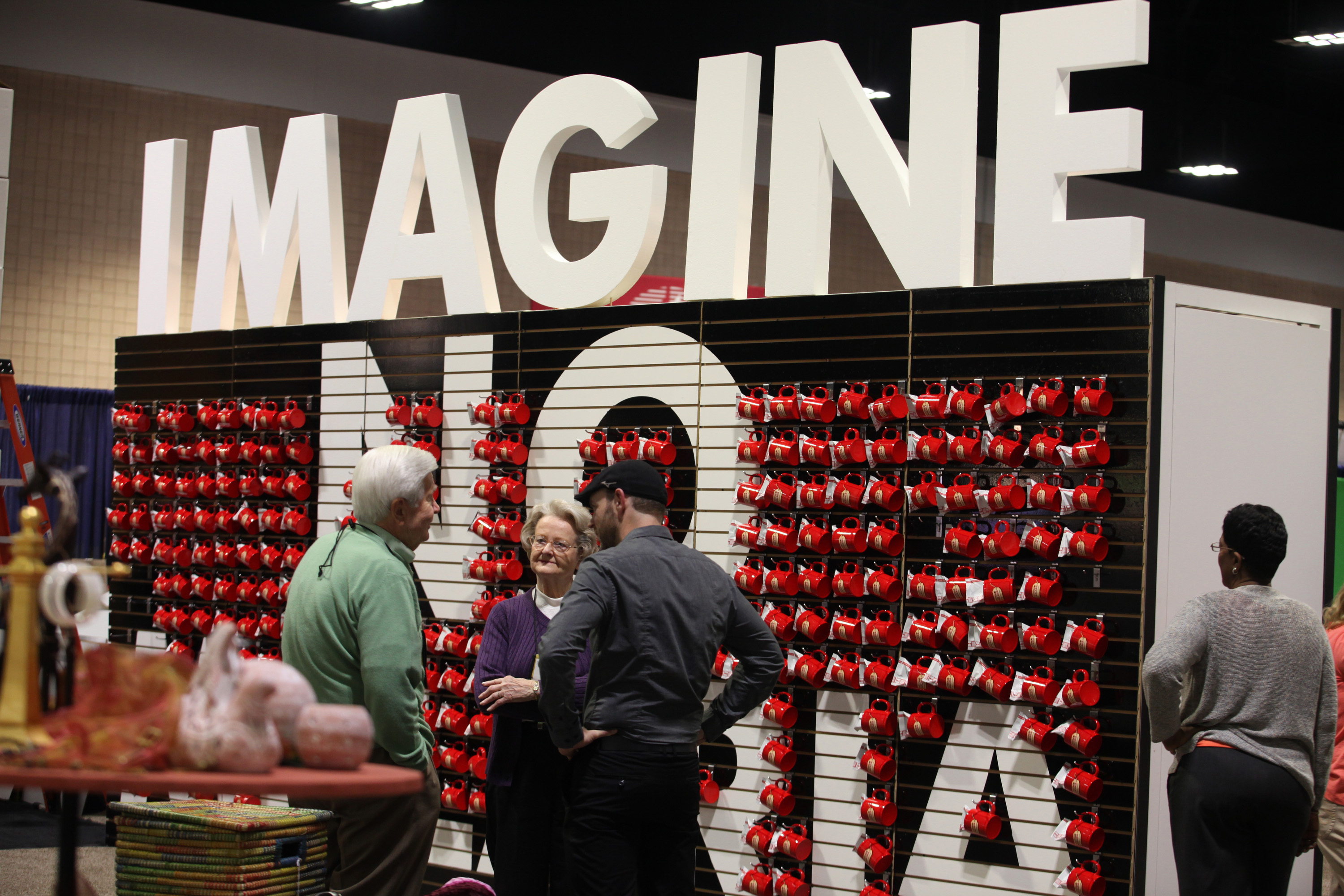 The Imagine No Malaria booth at the 2012 General Conference in Tampa, Fla., is an example of the kind of information booths that will be on display at the 2016 gathering. Photo by Kathleen Barry, UMNS

After the U.S. Supreme Court in 1987 struck down creation science in public schools as unconstitutional, intelligent design gained popularity as an alternative to the study of conventional evolutionary biology. The Discovery Institute, a public policy think tank founded in 1991, explicitly seeks to champion intelligent design in academia.

However, according to its Social Principles, The United Methodist Church does not see conflict between faith in God and the study of biological evolution.

“We find that science’s descriptions of cosmological, geological, and biological evolution are not in conflict with theology,” the Social Principle on “Science and Technology” says.

General Conference in 2008 approved a resolution “opposing the introduction of any faith-based theories such as Creationism or Intelligent Design into the science curriculum of our public schools.” The commission cited the resolution specifically in declining the Discovery Institute’s exhibit application.

He told United Methodist News Service he hopes the resolution can be used to “help communicate against introducing subtly religion-based ideas that are inconsistent with science into the science curriculum.”

West of the Discovery Institute, however, disputes that his group violates the resolution.

“Although we strongly favor the idea of intelligent design — that there is purpose in nature and not a blind process — we actually don’t favor pushing it into public schools,” he said.

The theory of natural selection is based on Charles Darwin’s observation that all life forms have a variation of traits. He observed how the life forms with the best traits to survive in their environment tend to live long enough to procreate and pass on their traits to their offspring. Over time, the most advantageous traits will dominate the population while traits ill suited to an environment will die out.

Jory Weintraub with the Duke Initiative for Science and Society said understanding evolutionary principles is essential in fighting many diseases. Malaria, which The United Methodist Church is working to combat, is a prime example.

“Because both the protozoan parasite and the mosquitoes that spread it are living organisms, they are constantly undergoing evolutionary changes, or changes over time.” Weintraub said. “These changes, however small they might seem, are often enough to allow the protozoan parasite and/or the mosquitoes to evade the actions of the drugs or chemicals that are intended to control them.”

For instance, one reason the World Health Organization recommends limiting the use of the insecticide DDT is not just because of its environmental effects but because overuse could lead to completely DDT-resistant mosquitoes.

“Understanding evolutionary principles allows us to be able to make predictions about how pathogens (like the protozoan parasite) or vectors (agents that spread disease, such as the mosquitoes) might change, and anticipating these changes is the key to controlling the disease,” Weintraub said.

The Discovery Institute first garnered international attention when the Dover, Pennsylvania, public school district faced a federal lawsuit in 2005 for its policy requiring students hear about intelligent design. The Discovery Institute was not directly involved in the case, and West says his group opposed the school board’s policy from the beginning.

However, two of the institute’s fellows testified in the trial in favor of intelligent design in Kitzmiller v. Dover, and the group filed amicus briefs also in favor of the concept.

Ultimately, federal Judge John E. Jones III ruled that intelligent design, “cannot uncouple itself from its creationist, and thus religious, antecedents” and thus should not be taught as science.

Jory Weintraub, an immunologist who teaches with the Duke Initiative for Science and Society at United Methodist-related Duke University, said the overwhelming majority of the scientific community agrees with the judge’s assessment.

Because intelligent design starts with belief in a designer, who as Jesus said should not be put to the test, it doesn’t offer testable hypotheses the way evolutionary biology does.

“In my opinion, the UMC’s stance on this topic reflects an open-minded, progressive, enlightened view that is absolutely necessary if people of faith are going to understand and embrace science without feeling alienated or marginalized,” Weintraub said by email. “This is exactly what the science community (which, itself, includes many people of faith) wants to see.”

This marks the first General Conference that allows groups unrelated to The United Methodist Church to have booths in the event’s exhibit halls, expanding on a sponsorship program offered during the 2012 General Conference.

The commission projects the total costs of the 2016 General Conference to be about $10.5 million with exhibits and sponsorships expected to bring about $600,000 in revenue. The meeting will take place May 10-20 in Portland, Oregon.

Kenaston added that the exhibitor program’s purpose is to acquaint people at the event “with products, services and resources that aid in local church ministries.”

For example, this year’s sponsors include the office supply chain Staples, which has a discount program for United Methodist churches that also helps support the United Methodist Committee on Relief.

The Discovery Institute made repeated appeals to the commission to reconsider the denial before going public last month. Kenaston said she has received plenty of unhappy emails since then.

“Only a small percentage of those who emailed have identified themselves as United Methodist,” she said. “And we've also received some emails in support of the commission’s action.”

Hahn is a reporter for United Methodist News Service in Nashville, Tennessee. Contact her at (615) 742-5470 or [email protected].