In an act of witness in front of delegates to the 2008 United Methodist General Conference, more than 200 people declared that the denomination's policies and practices against homosexuality are "sinful" and that "sexuality is a gift from God."

Primarily dressed in black, demonstrators walked onto the legislative floor at the Fort Worth Convention Center, formed a two-lined cross around the central table and draped it in a black shroud to protest the church's stance on homosexual practice. They entered silently, but once all demonstrators were in place, they sang, "Were You There When They Crucified My Lord?"

The black shroud and the black worn by the demonstrators to "recognize our brokenness" and "to acknowledge that the body is broken," said Audrey Krumbach, who read a statement during the witness.

The 15-minute demonstration was in reaction to the April 30 decision to retain the denomination's decades-old proscription in the Social Principles and other parts of the Discipline describing homosexual practice as "incompatible with Christian teaching."

Delegates voted 501-417 to keep the stance and also passed a resolution against homophobia and heterosexism, saying the church opposes "all forms of violence or discrimination based on gender, gender identity, sexual practice or sexual orientation."

One witness, speaking on behalf of the protesters, told the General Conference that when The United Methodist Church refuses to accept and honor everyone's call to professional ministry, it refuses to abide by the rules of Methodism's founder John Wesley: do no harm, do good and stay in love with God.

"We are part of God's living body in today's world, but our United Methodist Church refuses to accept what God has already done; refuses to keep covenant with its own words in the baptismal promise &ellipsis refuses to open its hearts, minds and doors," said Krumbach, formerly a member of the North Georgia Conference and a student at Garrett Evangelical Theological Seminary, Evanston, Ill.

She said those outside the church have noticed "the church truly scapegoating" people "on the altar of so-called unity" and "the closeting (of) the LGBTQ people who faithfully serve the church."

Krumbach declared that the "anti-gay policies of The United Methodist Church are wrong and sinful in the sight of God" and in the act of witnessing "we reject the lie that homosexuality is a sin and that by standing, we affirm that sexuality is a good gift of God."

Bishop Gregory Palmer, president of the Council of Bishops, said some decisions made by General Conference delegates have been "more wrenching than others to all the members of this body and the whole church, including your bishops."

He read a statement to the conference to demonstrate that the bishops, in a time of crisis, remain focused on their leadership roles and their pastoral duties and to recall the messages of hope offered throughout the General Conference.

"It was our conviction that being in holy conferencing means listening deeply and sensitively to voices you might otherwise not hear" and "identify ways in which the votes and the desire for a witness was affecting the life of the council," he said.

Supporters of full inclusion share a time of witness. A UMNS photo by Mike DuBose.

The "sensitive listening" that the bishops have been involved in led them to reaffirm their covenant to love, preach, serve, live by Wesley's three rules and to lead all United Methodists, Palmer said.

During the witness, bishops who have different perspectives around the issue of sexual identity moved within, around and outside the demonstrators to live out their pastoral role among the body.

Sixteen bishops, paralleling the 12 disciples, met with 12 of the demonstrators to maintain the covenant of holy conferencing and keep conversation going toward wholeness. The bishops who are meeting with the demonstrators are not of one mind but are of one heart in seeking the wholeness of the body of Christ and the denomination, Palmer said.

While the demonstration occurred, the presidents of the council Bishop Janice Riggle Huie, whose tenure ended during General Conference; Palmer, the newly installed president; and Bishop Larry Goodpaster, the president-designate stood behind the altar table with arms lifted and hands clasped together as they prayed for the conference and for the activity taking place.

"This was a symbolic act of our praying for the whole body. It was not intended to be a protest. It was a sign of leading a community in prayer," Palmer said. "It was to say that these are people, we are people and we are all trying to be disciples of Christ."

Retired Bishop Melvin Talbert, a former ecumenical officer of the Council of Bishops, reminded the conference of the church's 1939 action, when the denomination segregated black Methodists into the Central Jurisdiction.

"That action was wrong. That action was a sin against God," and in making the decision on April 30, the General Conference "has taken an action that is wrong," he said. The segregated jurisdiction was dissolved in 1968.

Prior to asking the General Conference to reconsider its April 30 vote, Talbert said that those in the former Central Jurisdiction lived within a structure and were able to repair broken relationships with the church. That has not been the case with those with differing sexual identities, he said. 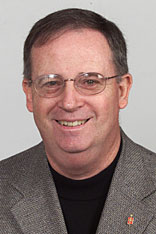 Palmer found Talbert's statements surprising but said he could understand the content. Comparisons of sexual rights, civil rights and the Central Jurisdiction are nothing new, he said.

Some delegates stood in solidarity with the witnesses, and others remained seated because they did not support the witness.

'I make no apology'

North Georgia Bishop Lindsey Davis expressed thanks for the way the leadership team of the Council of Bishops allowed the witnesses to voice their concerns and their hurts, but he refuted Talbert's assertion that The United Methodist Church is wrong in upholding its stance against homosexuality.

The church's stance is compassionate, he said, but those who participated in the act of witness may not have that perspective and use civil rights as an argument for inclusion.

"I definitely disagree with Bishop Talbert on that matter. &ellipsis I do not think it has anything to do with civil rights," Davis said. He added that the church takes great strides to protect the civil rights of all people.

"I will go to the mat to protect the civil rights of all of these persons who protested today, but I don't think you can equate the two," he said. "If you do, it is doing a disservice to the civil rights movement of the 1960s and on."

'All children of God'

Eunice Musa Iliya, a delegate from Nigeria and a student at Claremont (Calif.) School of Theology, stood in support of the witness, despite being admonished by other members of the Nigerian delegation. "My delegation remained seated because they believe that it is incompatible with Christian teaching," she said.

Bishop Sally Dyck passes by gay rights activists lying on the sidewalk outside the convention center. A UMNS photo by Mike DuBose.

Iliya found being the lone supporter "terrible" because "they are not happy with what I did." She stood "to support my fellow brothers and sisters who are a part of this body. ...They are all children of God, and we should support them and give them opportunity to be in the same place where God has called us to be."

The show of support from General Conference delegates made demonstrator Becca Cramer of Claremont, Calif., cry tears of joy. "To see allies and all the delegates who were willing to stand with us despite the reasons others were giving them to sit down, and despite what may happen to them because of their solidarity, gives me so much hope that the future of our church will live into Christ's vision and will stop being the broken church that we are now."

Palmer advised Iliya and other delegates who are being chastised for their display of solidarity to "hold to God's unchanging hand." He also advised those who are marginalizing members of their delegations for supporting the demonstration "to take great care to understand the complexities of reasons as to why anyone stands."

'We were held captive'

The Rev. Chappell Temple of the Texas Conference said there were numerous delegates who were "dismayed, saddened and outraged" at the act of witness. People are questioning whether such action would have occurred if the General Conference would have changed its stance on homosexuality, he said.

Bishop J. Lawrence McCleskey, the presiding bishop prior to the action, halted the legislative assembly and recessed the conference. Chappell said, "He should have said those wishing to leave can do so. We were held captive. The altar was desecrated; the singing was presumptuous, self-righteous and accusatory."

While noting the pain resulting from the church's decision and stance, Temple also said it was wrong to lay guilt on those trying to follow Christ and listen to Christ. "I understand that the (act of witness) was a compromise, and what was allowed was simply blackmail, it was extortion" and was disrespectful to people of different views.

"For a person to give a long, one-sided speech, and for a bishop to speak and call for reconsideration, goes against everything that we hold together and as holy covenant," he said.

During the witness, Krumbach said the voices of gay, lesbian, bisexual, transgender and queer people have not been heard, but Chappell disagrees. "They have made witness the entire week," he said. "No one is happy about where we are, and their demonstration implied that somehow we've heaped burning coals on them."

Delegates, he said, are trying to hold the church together "not for artificial unity, but for a unity of heart that strikes at the very root of Christian conference."

Some delegates and visitors questioned why the event was not streamed live on the Web along with the General Conference business sessions. McCleskeytold delegates the witness event was not streamed because it occurred during a recess, and normal procedure during the breaks is for the streaming video to be replaced by an image of the assembly's logo. However, he said, the witness event was recorded and the video would be posted by United Methodist Communications on the General Conference Web site, www.gc2008.umc.org.