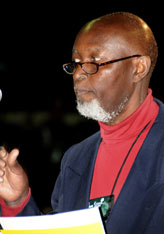 Ralph R. Oduor, a lay member from the New England Annual Conference, asks for the establishment of a General Conference Ethics Committee. A UMNS photo by John
C. Goodwin.

Delegates to the 2008 United Methodist General Conference have called for the establishment of an ethics committee after hearing concerns about gifts given to central conference delegates.

On April 26, a motion from Ralph R. Oduor, a lay member of the New England Annual (regional) Conference and retired attorney, asked the Commission on General Conference to establish a General Conference ethics committee to address those concerns. The 992 delegates overwhelming approved the motion, asking the current commission to propose to the 2012 General Conference guidelines for such a committee, including its composition, scope and authority.

The Renewal and Reform Coalition, an entity that comprises the Confessing Movement, Good News/Renew, Transforming Congregations and UMAction, provided free cell phones to more than 150 African and Filipino delegates to use during General Conference. Officials with the coalition have said the cell phones were given to the delegates with no strings attached.

Some church leaders and delegates questioned whether democratic processes had been compromised. Church officials and delegates expressed concern that the coalition might use the phones to offer suggestions on how to vote on particular issues. Coalition officials have denied that, stating instead that the phones were given as an act of kindness and to give the central conference delegates equal access to technology.

Oduor said he "was deeply troubled" by the reports concerning the "possibility that gifts were given to certain delegates in what may have been an attempt to improperly influence their voting stance."

He said there is no place in the current structure for possible violations of the covenant to be fairly revealed. "It is damaging to the body to have suspicions, charges and countercharges flying in all directions without a means to address the possible offense."

Oduor told the General Conference that an ethics committee is an essential "venue where such concerns can be raised and acted upon."

The commission already has subcommittees and creates them as needed. The ethics committee would be a subcommittee for the upcoming 2009-2012 General Conference Commission, whose members will be elected by the delegates at the 2008 session.

She said the conference "does not have to legislate ourselves up to the gills," but it would be beneficial to have a statement around which people could covenant and build relationships, "as opposed to having statements on what can or can't be done. The statement would be something from the heart and not from the head."

General Conference is the top lawmaking assembly of the 11.5 million-member United Methodist Church. The central conferences are regions of the church in Africa, Asia and Europe.

Ralph Oduor: "I am deeply troubled."