Nine years ago, 34-year-old James Barasa, a father of four, was diagnosed with Kaposi’s sarcoma. Since then, he’s been in and out of the hospital, leaving his family financially unstable.

He and his wife are small-scale farmers who spend most of their earnings on his treatment, which includes testing every three weeks at the hospital.

Kaposi’s sarcoma is a type of cancer that can form masses in the skin, lymph nodes or other organs. In sub-Saharan Africa, it is the most common HIV-associated cancer in men and the second most common in women.

Barasa, a resident of Namake village in the Namayingo District of eastern Uganda, said the family has been struggling to keep the children in school. However, recently, Magooli Academy for Children, based in the district, enrolled his 5-year-old daughter into preschool.

“I’m relieved and happy that my daughter is among the lucky children to be selected to study at the academy,” Barasa said. “It has highly qualified and competent teachers, provides fees, scholastic materials, meals for the less-privileged children. My daughter will get a strong education foundation.”

His daughter is one of 86 children studying at the academy, 60 of whom are orphans fully supported by the school. The students range in age from 3 to 7.

Zalambi said he hopes to expand the school beyond preschool classes. 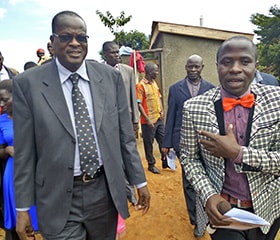 “I have a vision of setting up a fully furnished orphanage school that will be a model school in the entire district. Soon, I will add more classrooms from primary one to primary seven,” he said.

While presiding over the dedication ceremony of the academy in September, Bishop Daniel Wandabula of the East Africa Episcopal Area said this was a memorable occasion for parents, community members, teachers and children, adding that it marked the beginning for future success for all involved.

Wandabula was impressed with what Zalambi and his team have been able to achieve in a short period of time.

“Thank you for obeying to listen to God’s vision of helping orphans and vulnerable children in this community. Continue to pray, plan and work hard. Continue doing the right thing and God will enable this school to grow to what he intends it to be,” Wandabula said.

He encouraged Zalambi not to lose track of his vision and to continue to nurture it, even if it takes time to materialize. The bishop also advised him to take issues of accountability and transparency seriously, adding that they are crucial in building strong institutions.

Wandabula urged parents and guardians not to take advantage of the school.

“Take care of your children at school, contribute to the school’s development, come together as a group and make bricks to build the school, provide labor where you can, or look for money for labor to put up other buildings at the school. Parents need to know that in this world, there is nothing for free,” he said.

Retelling the school’s journey, Zalambi said in 2009, he was teaching in a government primary school in the Bugiri District. He said he noticed that many children were suffering. They were walking long distances to school barefoot, he said, sometimes with no food to eat while at school and no books.

“I said, ‘My God, what I can do to help the children?’ I started praying and fasting, asking God for guidance. In 2015, I got a vision from God directing me to start a community-based organization. In that same year, I set up the Child Crisis Center,” he said.

Through the center, he was able to support vulnerable children with books, pencils and pens, shoes and uniforms at their respective schools. The crisis center also manages a group of 30 widows and equips them with skills in making arts and crafts, necklaces, bracelets and handbags that they sell collectively to earn a living.

Zalambi said he never ceased praying for the children. In 2017, he got another vision from God to start a nonprofit school to help vulnerable and orphaned children. He bought land and set up the academy in the community where the crisis center is based.

That same year, Zalambi said, he received an email from a man in the Netherlands who he had never met or spoken to before.

“The man told me God had spoken to him to support me. He sent me some pounds, which I used to start the foundation of the building to the beam level. After that donation, I have never heard from him again, despite the efforts to communicate via mail,” he said.

“I am grateful to God who gave me this vision, and through his guidance and support from a few people, our baby, middle and top classes are complete.

“This school is going to save many children from walking between 5 and 6 kilometers to school. We shall provide them with quality education. I want orphans and vulnerable children that come to this school to have a bright future,” he said.

Zalambi said fellow United Methodists and others have supported the school in different ways.

“Some have given us supplies, like clothes, soap (and) shoes, to give the children, and as a school, we are able to provide food,” he said.

The money for food comes from parents, who are required to pay 15,000 shilling per month (about $4 U.S.). The school uses the money to provide breakfast and lunch for all 86 children.

The majority of the orphans in the school have single parents, who do not have to pay the monthly fee, while others have lost both parents. Zalambi said some of the children’s parents died of AIDS-related illnesses or malaria, while a few were eaten by crocodiles while fishing.

While the school is making strides in education, there are some obstacles.

Head teacher Alex Isabirye said children lack toys and uniforms, making it hard to identify which child is in which class. The school also has limited learning materials and no offices for teachers.

“As we strive to give these children the best, we still have challenges. Our children do not have uniforms, no adequate instruction, as well as playing materials like balls, and yet at this age, play is very important for their physical growth,” Isabirye said.

The Rev. James Mwoho, Busia District superintendent, applauded Zalambi for the transformation he has made in the community during his short time in the area.

He cautioned parents and other community members to protect the facility.

“Treasure the facility. Be vigilant, watch over and protect it. Support the school in its vision to ensure these children become very important in the future,” he said.

Agaba is the communications officer for the East Africa Episcopal Office of The United Methodist Church in Kampala, Uganda.