She’s a plainclothes cop, but on Sunday mornings she wears a uniform. That would be her clergy robe.

When not solving cases, she’s preaching, teaching, counseling and visiting the sick.

“With anything you do, it has good and bad, ups and downs,” she said of pastoring on top of policing. “Mostly, it’s a lot of joy.”

Smith puts some 10,000 miles a year on her car, making the 45-minute drive to and from Terrell two to three times a week.

And while she does get paid about $10,400 annually as a pastor, Smith said she gives most of the money back to Warren Chapel.

That doesn’t surprise the Rev. Vic Casad, her district superintendent. 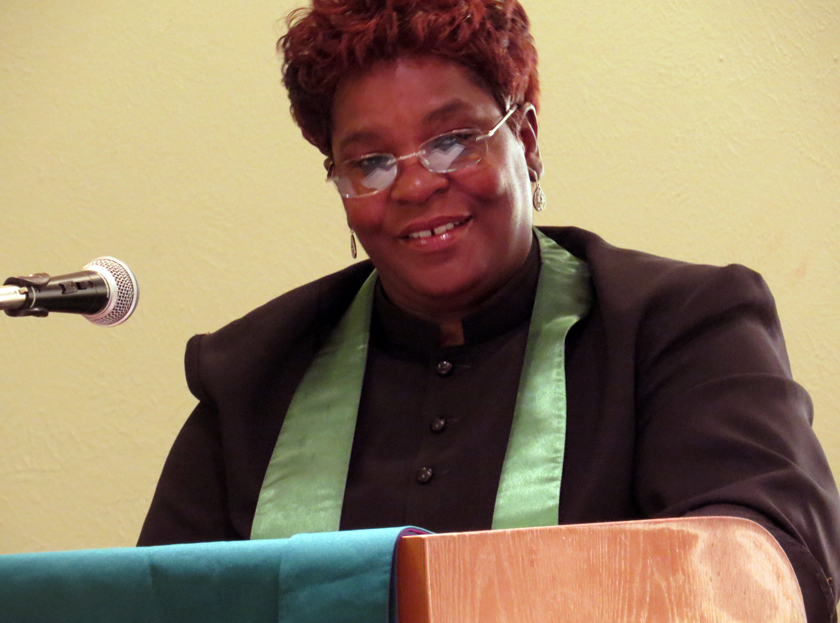 The Rev. Doris Smith is a part-time pastor for Warren Chapel United Methodist Church, in Terrell, Texas. Smith works fulltime with the Dallas Police Department as a detective. Photo by Sam Hodges, UMNS.

“Servanthood is who she is,” he said.

Smith as detective-pastor has been a singular figure in the North Texas Conference, but on July 7, she also became an object of concern and compassion.

That’s when four Dallas police officers and a transit officer were killed in an ambush. Smith was working nearby, and one of the victims was a good friend and former patrol partner.

“In my whole career, that’s the worst thing I’ve ever experienced,” said Smith, in her 27th year as an officer.

Smith grew up in Dallas, her father a paint company supervisor and her mother an office worker at Parkland Hospital. The itch to become a cop came early.

“I was always nosy, always wanting to be in people’s business,” Smith said, smiling big.

After community college and some semesters at the University of North Texas, she entered the police academy at 21 and joined the Dallas force at 22.

The ministry possibility occurred to Smith early as well. Active from her mid-teens at Dallas’ Camp Wisdom United Methodist Church, she noticed that even older people would ask her for advice.

“I would always have a word for them, and pray for them,” she said.

Through the years, she balanced police work with involvement at Camp Wisdom. She sang in the choir, worked with youth and eventually became a lay speaker.

Meanwhile, Smith made detective in 2006. She’s assigned to the traffic division, where she works 150-200 cases at any given time, with hit-and-runs the most common.

Though plainclothes, she wears a badge and holsters a Sig Sauer 9 mm pistol.

Smith acknowledged her call to ministry in 2009, and by 2012 she had finished local pastor licensing school and been appointed to Warren Chapel.

It’s an African-American church with just 34 members, though it’s a force in the community, with a strong vacation Bible school, an annual women’s conference and a college scholarship program.

Smith has worked to involve young people in worship. She’s recruited acolytes, and the recorded music is handled by 10-year-old Deyton James.

Parishioners describe Smith as a caring, involved pastor who doesn’t hesitate to make an unplanned trip to Terrell.

“When something happens, you can call her, and she’s there,” said Alicia Spears.

For Ruby Shaw, another Warren Chapel member, Smith’s police background is an advantage. 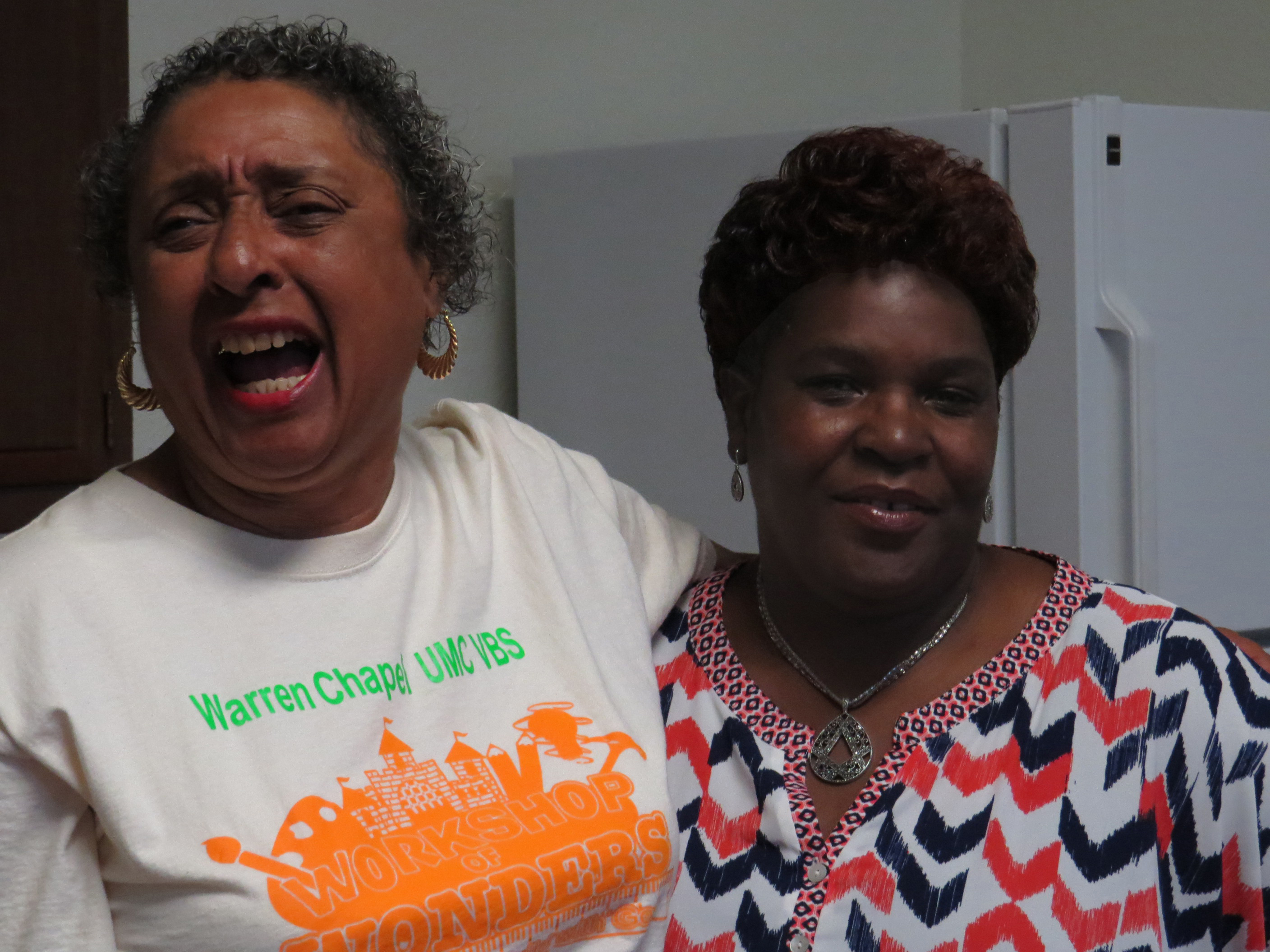 “She can counsel with us and tell us a few things about safety,” she said. “I appreciate that.”

The Rev. Janet Bell Odom was pastor of Camp Wisdom United Methodist as Smith answered the call to ministry, and she too thinks Smith’s law enforcement work pairs up well.

“She has the Jesus knowledge and the police knowledge, and she puts those things together,” Odom said.

On the night of July 7, Smith was working an off-duty shift, helping to keep traffic clear of a road construction project in downtown Dallas, when trouble erupted at the Black Lives Matter rally about five blocks away. Smith could see police cars with sirens flashing headed there.

Smith and the officer she was working with picked up enough information on their police radio to know this was a crisis. They drove to about two blocks from where the officers had been shot in ambush by Micah Xavier Johnson. Later that night, after a standoff, he would be killed by a bomb-carrying robot activated by police.

The scene was chaotic as Smith arrived.

“As the rally was coming to a close there were participants on foot as well as in vehicles,” she recalled. “Traffic came to a halt. People were running, fleeing their vehicles, running between cars, seeking a safe haven.”

She and most other officers near the scene moved to City Hall as the SWAT unit moved in. As the turmoil continued, Smith learned that officers had been slain and they included Sgt. Michael Smith.

He was no blood relation, but they had been young officers together, and were often patrol partners.

“I just cried,” she said of her reaction. “He was a family guy — loved his daughters, loved his wife. And he was a church man. He loved God.”

Smith would get home about 1 a.m., but about 3 a.m. got a call to return and be part of the force guarding the large crime scene.

During the fateful night, Smith recalls praying a lot. She also fielded contacts from family, church members and fellow clergy.

“She texted us when she could that she was OK,” said Hilda Braggs of Warren Chapel. “I stayed up until daylight watching the news. It was devastating, and even more frightening because I knew somebody that was in the midst of that.”

Despite all that happened, Smith preached the following Sunday at Warren Chapel.

“I had a lot of support from clergy,” she said.

Though she often thinks about July 7, especially the fallen officers, Smith has resumed the busy routines of her dual careers. She’s also pushing forward with Course of Study, the part-time education program for local pastors.

No complaints from someone used to sacrificing for ministry.