Does eliminating guaranteed full-time appointments for elders violate The United Methodist Church's constitution? The denomination's top court this week will take up that question.

In addition to the constitutional issue, the Judicial Council could weigh whether the church's top legislative body actually made the change to guaranteed appointments at all, a question that arose after the controversial action of the 2012 General Conference was referred to the church court.

In The United Methodist Church, ordained elders agree to go wherever their bishops and cabinet send them. At General Conference, delegates approved legislation intended to allow a bishop to recommend to the annual conference's board of ordained ministry and clergy session that an elder be placed on unpaid transitional leave if "a missional appointment is not available."

Also approved was legislation permitting a bishop and cabinet to give an elder "a less than full-time appointment."

Proponents say the legislative changes would help bishops and their cabinets better deploy pastors to where they are most needed and dismiss the minority of clergy who are ineffective.

"Missional appointments mean exactly that:the strategic placement of the best spiritual leaders for the health and vitality of a local church," said Greater Northwest Area Bishop Grant J. Hagiya. He served on the Study of Ministry Commission that recommended the changes. 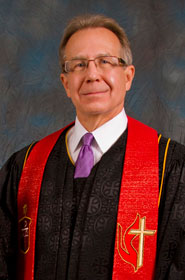 "If upheld, I believe the action by General Conference will enable us to make more strategic appointments to strengthen our resolve in the Call to Action: a 10-year concentration on improving the health and vitality of our local churches."

Critics question whether the changes are in line with the denomination's constitutional guarantee of due process for clergy. And even some supporters warn of potentials for abuse of power.

The Rev. Maxine Allen is among the United Methodists expressing doubts that the legislation passes constitutional muster. She is the ethnic ministries coordinator for the Arkansas Annual (regional) Conference and Wesley Foundation director at the University of Arkansas at Little Rock.

"I don't think within the legislation that the protections (for clergy) are adequate," said Allen, one of Arkansas' three African-American women elders. "If in fact the Judicial Council rules that it is constitutional, I do believe it will adversely affect ethnic and women clergy in that we are often the last ones hired, first ones fired if you use a corporate mindset."

The Rev. Justin Halbersma, pastor of Wesley United Methodist Church in Winona, Minn., supports the end of guaranteed appointments. But in a blog post during General Conference, he outlined possible unintended consequences.

He raises concerns that the change might discourage potential church reformers from "rocking the boat" or that it might lead to the early exit of new clergy who simply need time to mature in ministry. Even Methodism's founder John Wesley had a rough time of it in Georgia in the early days of his ministry.

"Ultimately, I believe that no matter what safety measures would be put in place, the possibility of abuse is always there," Halbersma told United Methodist News Service. "The biggest issue I see is that we need to have as open and transparent of a system as we can (even if it means admitting we screwed up and have faults) in order for trust to be built so people can speak up against any abuses that might occur."

Whatever the Judicial Council decides, it will have a global impact. The parts of the Book of Discipline, the denomination's law book, under review pertain to all United Methodist elders. 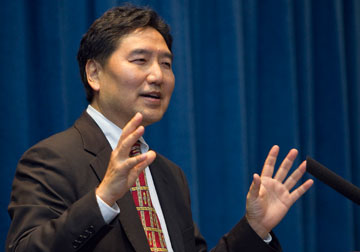 The Judicial Council's hearing on Oct. 24 in Elk Grove, Ill., will mark the third time the court will review the constitutionality of an action by the 2012 General Conference, the denomination's top lawmaking body. General Conference met April 24-May 4 in Tampa, Fla.

Previously, the top court invalidated the 2012 General Conference's modifications to the fund that supports United Methodist bishops. On the last day of General Conference, the Judicial Council stunned many at the assembly when it also ruled unconstitutional a plan to restructure the denomination's general agencies.

But constitutional questions aren't the only possible hurdle for changes to the appointment system. Some question whether the General Conference delegates made the change they think they did.

The Rev. L. Fitzgerald "Gere" Reist II, secretary of the General Conference, informed the Council of Bishops on June 11 that the language in the 2012 Book of Discipline "does not eliminate the security of appointment for elders."

At issue are two potentially contradictory sections of the next Book of Discipline. The 2012 General Conference revised the book's Paragraph 337 to allow a bishop to recommend an elder be put on transitional leave.

However, the assembly left Paragraph 334.1 intact. The latter paragraph says: "Every effective elder in full connection who is in good standing shall be continued under appointment by the bishop &ellipsis."

Study of Ministry Commission members contend that there is no contradiction, saying in a June 12 release that transitional leave "still constitutes an appointment." 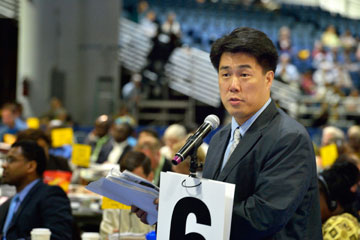 The Rev. We Hyun Chang argues for retaining guaranteed appointments during a debate at the 2012 United Methodist General Conference. A UMNS photo by Paul Jeffrey.

The commission, in its 2011 report, said the current practice of guaranteed appointments is not financially sustainable and "limits the ability of the church to respond to the primacy of missional needs." An earlier 2010 report estimated there are 784 more U.S. clergy than positions needed in the church.

"We need to be able to put the right people in the right places at the right time," said the Rev. Tom Choi, a commission member and Hawaii District superintendent in the California-Pacific Conference. Already, he noted, ordained deacons, who serve ministries of preaching and teaching, and licensed local pastors do not have guaranteed appointments.

But each annual conference must deal with a handful of ineffective elders, he said. "It's just impossible to appoint them, and yet we have to."

Before he was elected bishop in July, Mueller was the senior pastor of First United Methodist Church in Plano, Texas, and chair of the North Texas Conference's board of ordained ministry.

Still, Mueller, Choi and others acknowledged the need for safeguards to prevent effective pastors from being dismissed arbitrarily.

Fred Brewington, a lay General Conference delegate from the New York Annual (regional) Conference, proposed that the Judicial Council issue a declaratory decision regarding guaranteed appointments. Delegates approved the request 397 to 341 on May 4, the last day of the lawmaking assembly.

The question referred to the Judicial Council: Does removing guaranteed appointments for clergy violate:

As a 2012 General Conference delegate, Mueller offered an amendment that was refined and adopted to create a task force to provide greater oversight and among other things, monitor how such factors as race, gender and age affect the appointment process. The legislation incorporated other protections for clergy as well.

"I believe a careful reading of all the amendments adopted by General Conference makes it clear that there is indeed fair process," Mueller said. "The legislation explicitly states that every change of status must utilize appropriate fair process, including a vote by the full clergy session."

The General Conference of what was then the Methodist Church first required bishops to appoint all elders in good standing in 1956, the same year the denomination approved women's ordination.

Since then, women clergy have risen through the ranks to become district superintendents, bishops and even pastors of some large churches. People of color also have made gains in The United Methodist Church.

A United Methodist report released in April found that the percentage of women clergy serving U.S. congregations increased by almost half from 20 percent in 1997 to 29 percent in 2008. During the same period, the report said, the percentage of people of color pastoring U.S. congregations held mostly steady at 13 percent. The United Methodist Commission on the Status and Role of Women and the Commission on Religion and Race released the report.

The president of the Council of Bishops now is a woman, and her successor will be African American.

The Rev. We Hyun Chang, co-pastor of the United Methodist Church in Belmont and Watertown, Mass., credits security of appointment with helping congregations to be open to immigrant clergy and cross-racial appointments.

What happened at General Conference

The Higher Education and Ministry legislative committee - the first stop at General Conference for appointment-related petitions - voted in favor of changes to Paragraphs 337 and 338 in the Book of Discipline, the denomination's law book.
Those changes include:

Because of the legislative committee's overwhelming support for the changes, the petitions went on the General Conference consent calendar. The consent calendar is a tool General Conference uses to expedite legislation wherein legislative committee recommendations with no more than 10 votes in opposition are grouped and approved together. A motion to reconsider the item on May 1 failed by a vote of 564 to 373.

But, he also said, it helps to ensure qualified elders remain under appointment even though not all congregations are so welcoming. "We need to remember that there are still congregations that are implicitly and explicitly against the appointment of women and persons of color in The United Methodist Church," he said.

Lawsuits from U.S. clergy alleging bias are unlikely to get far in civil courts. In January, the U.S. Supreme Court recognized a "ministerial exception" to U.S. employment anti-discrimination laws.

Another benefit of security of appointment, Chang said, is the freedom of the pulpit.

"It recognizes and encourages the clergy tobe faithful and authentic to the spirit of God and the way of Christ in their ministry," he said. "It helps them to speak truth in love both to the congregation and to theinstitutional powers both within and outside of the church."

Should General Conference's changes be upheld, it remains unclear how bishops, cabinets and local congregations will measure effectiveness.

Hagiya, bishop of the Greater Northwest Area, said the church has not historically done a very good job of evaluating pastoral effectiveness. "The push for metrics might be overblown, as how does one grow a church numerically in a rural community where the population is rapidly decreasing?" he said. "Metrics are one measure of fruitfulness, but not the only one."

No matter the Judicial Council's ruling, Chang said he hopes and prays United Methodists will respect the court's decision-making process.

"This will restore a sense of trust and unity in the life of our church."