The 2012 United Methodist General Conference will take up legislation this spring that would allow the redistribution of up to $60 million in general church funds.

"It's very clear that you don't make a decision about the amount of money and not answer two fundamental questions: 'Where's it coming from?' and 'What will it do?'" said the Rev. H. Eddie Fox, world director of evangelism for The World Methodist Council. "We have not answered either of those questions very well, and I don't believe we can go forward."

The Rev. Andy Langford, who helped draft the original proposal last summer, offered a revised version on March 6 for the Connectional Table to consider.

He said he hoped to clarify the source of funds and some of the spending plans. He requested the resolution be referred to the board of the General Council on Finance and Administration, the denomination's finance agency, hoping also to gain its support.

In his revision, Langford said the funds would come from the denomination's World Service Fund, which supports most general agency work, and the spending should focus on the adaptive challenge of directing resources "to an intense concentration on fostering and sustaining an increase in the number of vital congregations." He said the spending should include accountability with metrics. 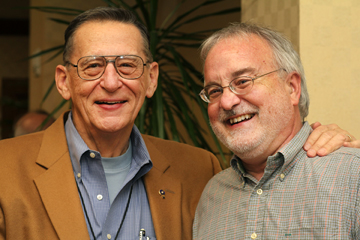 Joe M. Whittemore and the Rev. Andy Langford, both
with the Southeastern Jurisdiction, share conversation
during a break in the meeting of the Connectional Table.
A UMNS photo by Kathleen Barry.

"In other words, we cannot determine today exactly how every penny should be spent," said Langford, pastor of Central United Methodist Church in Concord, N.C. "But we want to give ourselves the flexibility, the focus for the adaptive challenge."

But a number of Connectional Table members protested that endorsing the revision would be out of order because the original petition has already been submitted to General Conference and only the denomination's top legislative body now has the authority to change it.

East Ohio Area Bishop John L. Hopkins, the Connectional Table's chairperson, said he did not consider the resolution out of order. "This body has a right to make a resolution, and it has the right to be in conversation with GCFA about the content of that resolution," he said.

Ultimately, after a 25-minute discussion, Connectional Table members voted down Langford's revision and did not refer it to the General Council on Finance and Administration.

The finance agency has taken no action on the $60 million proposal. Moses Kumar, top staff executive, said the agency would deal with the proposal after it is passed by General Conference in the same manner as other funding proposals.

General Conference will get its chance to evaluate and potentially amend the original proposal when it meets April 24May 4 in Tampa, Fla.

What the petition would do

The "Reallocation of Funds" petition is part of a proposed reorganization of the denomination's general church agencies.

The legislation would consolidate nine of the denomination's 13 general agencies into a new United Methodist Center for Connectional Mission and Ministry. A 15-member board of directors would govern the center, and that board would answer to a proposed 45-member General Council for Strategy and Oversight, which would replace the Connectional Table.

The restructuring plan originated with the Interim Operations Team, and the Connectional Table refined and endorsed the plan, including the redistribution of $60 million, at its meeting in July 2011. The proposals come after more than four decades of declining U.S. membership and a number of reports saying the denomination's status quo is unsustainable.

Under the reallocation provision, the board of the new Center for Connectional Mission and Ministry would evaluate spending across the seven general church funds. Those are the Africa University, Black College, Episcopal, General Administration, Interdenominational Cooperation, Ministerial Education and World Service funds.

After its assessment, the 15-member board could recommend the redistribution of up to $60 million, about a tenth of the $603 million recommended budget for all seven apportioned funds during 2013-16.

The petition breaks down the redistribution this way:

Under the legislation, any reallocation would need "joint approval" by the General Council for Strategy and Oversight and the Council of Bishops.

At present, after General Conference adjourns, no entity can make changes to the allocated budgets.

To be ratified, constitutional amendments must win a two-thirds majority at General Conference and next must be approved by at least two-thirds of the members voting during annual conferences. That means the earliest a reallocation of funds could take place is 2014, said John Goolsbey, an executive of the General Council on Finance and Administration. 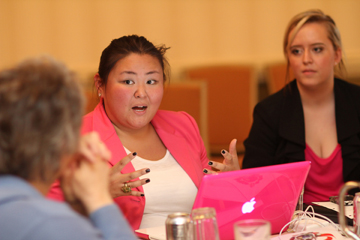 Bethany Amey makes a point during a discussion at the
Connectional Table. Both Amey and Stefanie Schutz, right,
represent the Division on Ministries with Young People for
the United Methodist Board of Discipleship. A UMNS
photo by Kathleen Barry.

Even if the two constitutional amendments win passage, Langford said he has heard concerns that the original petition still might run into constitutional problems by giving the Council of Bishops final approval on general church budgets.

In Langford's revision, the role of the Council of Bishops would be advisory in the funding decisions, rather than having final say. He also wants to restrict the funding pool to the World Service Fund, excluding the dollars designated for the National Plans for Strengthening Ethnic/Racial Ministries. Leaders of the denomination's five ethnic caucuses who serve on the Connectional Table have expressed concerns the plans' funding would be decimated.

Many agency executives have discussed worries that the reallocation would endanger their ministries. Agencies already have agreed to a more than 6.5 percent cut to the World Service Fund under the 2013-16 budget of $311.6 million, which General Conference will consider. The redistribution potentially would represent another reduction of nearly 20 percent.

Bethany Amey, a young adult Connectional Table member who represents the Division on Ministries with Young People, said she wondered if the redistribution would really make a difference. She pointed out that the young people's division, supported by the World Service Fund, uses its budget to help cultivate young lay leaders. "You're taking money away to put money back in," she said.

"GCFA and Connectional Table haven't worked on those budgets yet," Hopkins, the chair, responded. "Somebody is surmising that if we took a full $60 million out of World Service, there would be implications, but that's all hypothetical. We still have work to do at General Conference."

Kumar of the General Council on Finance and Administration pointed out that a proposal to take the entire $60 million out of the World Service Fund was what the Connectional Table was discussing. He echoed the sentiments of other members, saying the whole discussion was out of order.

Jay Brim, who as chair of the Connectional Table's legislative committee helped draft most of the restructuring legislation, told the group he can see both sides - Langford's desire for more flexibility and agencies' interest in long-term planning.

"What we're talking about here are two competing visions of how we should handle the mission and vision of this church," said Brim, lay leader of the Southwest Texas Annual (regional) Conference. "On the one hand, this resolution ... would allow a more nimble approach to funding various matters between General Conferences. On the other hand, it will cut a huge slice out of the budget out of our general agencies who have already taken steps to cut things."

He later added that that further budget cuts would mean layoffs of staff.

"That staff is a professional staff that carries with it an expertise beyond what is available to all local churches, and I mean the tallest of the steeples in the land," he said. "When we have to makes cuts in the staff of our general agencies, those cuts cannot be immediately replaced when and if greater harvests come."

*Hahn is a multimedia news reporter for United Methodist News Service. The Rev. Richard J. Peck contributed to this report.