Promises of support and prayers for healing for gays, lesbians, transgender and bisexual people are coming from bishops, pastors and laity as The United Methodist Church begins annual (regional) conferences around the globe.

At the Iowa Conference June 2-5, two documents with hundreds of signatures expressed compassion for gays. More than 500 signed a "Do No Harm" covenant stating the denomination's top lawmaking body made decisions that violated John Wesley's first General Rule by failing to acknowledge that members of The United Methodist Church are divided on homosexuality.

The covenant states, "When following the Book of Discipline requires us to do harm by discriminating against, diminishing, or demeaning our sisters and brothers in the family of faith, we are in an impossible situation and will be faithful to the law as interpreted by Jesus rather than comply with the Book of Discipline."

A second document, "Covenant of Conscience," is in support of same-sex marriage.

Clergy signers of that document pledged "in accordance with our ordination vows to 'seek peace, justice, and freedom for all people,' commit to marrying without bias or discrimination all people who seek the blessing of the church and are prepared to assume the privileges and responsibilities of a loving, committed, covenant relationship."

Laity signers pledged to support clergy in living out their duty.

The 2012 General Conference was April 24-May 4 in Tampa, Fla. General Conference is the only body that speaks for the denomination. During the 2012 assembly, the church maintained its language that homosexuality is "incompatible with Christian teaching," that gays cannot be ordained and clergy will not be allowed to perform same-sex marriages.

'Let it begin with me' 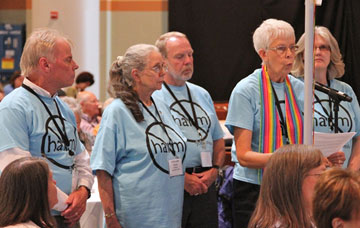 Members of the Iowa Annual (regional) Conference wear shirts "Do No Harm," as they presented documents in support of gays, lesbians, transgender and bisexual persons. A web-only photo courtesy of The Iowa Annual Conference.

In his address to the Baltimore-Washington Annual Conference, Bishop John Schol said he believes "gay and lesbian people are children of God &ellipsis (who) can live in loving, committed relationships that reflect God's grace-filled love.

"I do not understand all of the mysteries of human sexuality," Schol said. "I believe that our sexuality is a gift from the Creator to be shared in loving, committed relationships."

Schol said he knew there would be those who disagree but he wanted open and honest conversations.

"I want you to know what I think and feel. &ellipsis So let it begin with me."

Members of the Minnesota Annual Conference, meeting May 30-June 1, voted to send a resolution opposing a proposed amendment to the Minnesota state constitution that only a union of one man and one woman would be recognized as marriage. The proposal will be on the November ballot.

Those submitting the resolution stated that civil rights such as health insurance, equal taxation, retirement benefits and health-care directives are based on one's marital status.

"Hundreds of thousands of current and potential United Methodists in Minnesota would benefit from equal protection of civil rights," the resolution's sponsors said.

The resolution is advisory and does not obligate individual United Methodists or their churches.

Day of Prayer and Healing

During the Greater New Jersey Conference, members approved a resolution making Sept. 30 a conferencewide "Day of Prayer and Healing" for those hurt during "divisive conversations" around human sexuality.

Bishop Sudarshana Devadhar will write a prayer of healing and discernment for use by local churches. 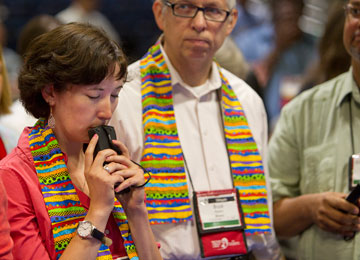 Delegate Sara Ann Swenson (left) of Minnesota presses her voting keypad to her lips while awaiting results of a vote on The United Methodist Church's stance on sexuality. A UMNS photo by Mike DuBose.

Bishop Robert Hoshibata of the Portland (Ore.) Area wrote "A Post-Mortem on GC 2010," after he went through "kind of a mourning period" after the worldwide assembly.

Hoshibata left the stage where the bishops were seated to walk with those gathered on the floor of General Conference during the heated debate on human sexuality. Non-voting guests were not allowed inside the area reserved for voting delegates.

"I could not remain seated in the section on the stage reserved for bishops. I felt God tugging at me to leave the stage and join the many non-voting persons who were demonstrating silently their distress at the continual efforts to disenfranchise the GLBT community," he wrote.

Hoshibata said he wanted to demonstrate there are bishops who support the efforts of the church to include all persons.

An effort to get the church to "agree we disagree" was defeated during General Conference. Schol and Hoshibata cited that decision as part of why they were speaking out.

"I was disappointed that General Conference could not even agree to disagree," Schol said. "I think there is a Christ-like path that we, as The United Methodist Church, have failed to find."

Schol said the church's stand is keeping nominally and non-religious young people out of the church.

*Gilbert is a multimedia reporter for the young adult content team at United Methodist Communications, Nashville, Tenn. Information for this report came from annual conference reports submitted by conference communicators.