The Miracle Offering for the West Ohio Annual (regional) Conference was dedicated to adding the final dollars needed for the purchase of the Cessna Grand Caravan for Wings of the Morning, a multi-conference campaign for $1.6 million started a year ago. Photo courtesy of West Ohio Annual Conference.

From the first U.S. United Methodist annual (regional) conference session to the last, which adjourned in Virginia on June 24, episcopal nominations highlighted the yearly meetings. In the central conferences outside the United States, sessions commenced in February and will conclude in December.

Along with nominating U.S. candidates for bishop, the church's four areas of focus, hands-on outreach opportunities and a laundry list of other issues also received major attention.

Developing principled Christian leaders for the church and the world

Ordinations were a high point of annual conference sessions, and several regional bodies celebrated younger-than-usual average ages of new clergy, many in their 30s.

During the ordination service in the Oklahoma Conference, Bishop Robert E. Hayes Jr. knelt and washed the feet of three deacons and nine elders. Establishing a new, comprehensive Office of Mission "significantly expands our idea of what the conference can do in equipping and deploying a new generation of people into mission of all kinds," said the Rev. Craig Stinson, director of connectional ministries/congregational development.

Memphis Conference was intentional about including a younger demographic. In addition to participating in music and worship, young people opened each business session with prayer. Josh Gonzalez, 18, of Curve United Methodist Church, Ripley, Tenn., delivered the annual Young People's Message. 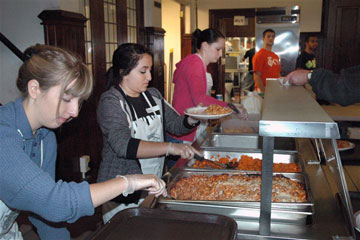 Global aspects of this focus area were not forgotten.

During the Virginia Conference sessions, young adult Chenda Lee offered a personal story of how retiring Bishop Charlene P. Kammerer touched her life. Struggling with her call, Lee heard Kammerer share her faith story and was inspired to enroll in seminary. Lee is the daughter of Bishop John G. Innis, episcopal leader of the Liberia Conference.

In honor of their bishop's work in the Democratic Republic of the Congo, specifically at the Mulungwishi Seminary, the New Mexico and Northwest Texas conferences established The Bishop D. Max and Valerie Whitfield Seminary Scholarship Fund. The goal is to raise more than $100,000 to endow a permanent scholarship.

Hungary Provisional Conference expressed joy at the admission of one new provisional pastor and another new candidate for the ordained ministry. "The fact that a new generation of young, gifted and committed men and women in &ellipsis is willing to take over responsibility is a reason for gratitude and hope," reported a spokesperson from the office of Bishop Patrick Streiff, Central and Southern Europe Area.

Youth ministry received major attention in the South Germany Conference sessions. Delegates extended monetary support to the youth church in Karlsruhe until 2018 and increased the half-time position for a social worker at the church to 100 percent.

"We need to lay aside the desire to hold on to the way church used to be," said Bishop John R. Schol, Baltimore-Washington Conference. He encouraged attendees to develop new ways of starting faith communities, repurposing buildings, calling and equipping spiritual leaders and raising money.

Illinois Great Rivers Conference rejoiced in the planting of three churches, including a new-church start in Bloomington-Normal, with much of the leadership coming from alumni of the Wesley Foundation at Illinois State University who have made Bloomington-Normal their home following graduation.

In the Northern Illinois Conference, Bishop Hee-Soo Jung spoke of the bold steps taken since the Harvest 2020 movement was announced five years ago. Thirty faith communities were launched, attracting more than 2,000 worshippers. "We can allow our changing society to shape the future for a dying church," Jung said, "or we can embrace change and adapt the work of making disciples to address the present and future age."

The fledgling republic of South Sudan garnered the attention of the Holston Conference, which committed $100,000 to build four new churches in the new nation.

A cluster of churches around Uzhgorod, Ukraine, hosted the Ukraine/Moldova Conference. "These vital congregations show the diversity of the church in Ukraine," said Michael Airgood, a United Methodist Board of Global Ministries missionary. "Some survived the Soviet days; others are new church plants. A few are in the heart of their oblast's capital, and others are in small surrounding villages."

Engaging in ministry with the poor

That theme was evident in many conference sessions.

Upper New York Conference delegates learned that that the yearlong HANDS4NY effort to feed a million people in a year was successful, providing food to more than 1.8 million by May 31, 2012.

Detroit delegates reaffirmed a challenge to all conference clergy to contribute one-half of one percent of their salary annually to support pastors' salaries in the Liberia Annual Conference and set up an online-giving platform for all people to contribute.

"Love, mercy and compassion, especially as we extend them to those most in need, are the evaluative tools of the reign of God and Christ's own dashboard of the report of who is journeying with him and who is not," said Bishop Minerva Carcaño of the Desert Southwest Conference.

Stamping out killer diseases of poverty by improving health globally

Imagine No Malaria, The United Methodist Church's comprehensive effort to end preventable malaria deaths in Africa, captured the agendas of several annual conferences. Many received special offerings for the ministry.

Arkansas Conference invited people to text "malaria" to 27722 to make $10 gifts from the floor of annual conference. Perhaps the youngest contributor was 8-month-old Natalie Williams, who gave $10 for each month of her age.

Bishop Warner H. Brown Jr. quite literally pitched Imagine No Malaria. At a Sacramento River Cats professional baseball game, Brown threw the first pitch and was interviewed about Imagine No Malaria. Youth and young adults distributed fly swatters, wristbands and leaflets, and gave Imagine No Malaria T-shirts to those who made a $10 contribution through text messaging. An Imagine No Malaria public-service announcement was played on the stadium's giant screens, and a portion of each ticket sold through a special online link was donated to the cause.

A 5K run/walk/stroll in Indiana Conference and a "Skeeter Run" in Louisiana Conference raised funds for and awareness of Imagine No Malaria. New York Conference delegates heard a message of challenge from Bishop Sally Dyck of the Minnesota Conference, which has raised $2.5 million in gifts and pledges to fight malaria.

In West Michigan, Bishop Jonathan D. Keaton preached from 2 Kings, "a microcosm of divine health initiatives." He emphasized the need to "stamp out killer diseases by stamping out killer situations." Following Communion, worship concluded with a blues rendition of The Lord's Prayer, by Blest Ellen, a former recluse who was healed, able to leave her house and live a full life when she heard a voice say, "Sing!"

HIV/AIDS was on the radar in the Desert Southwest and Holston conferences. Retired Bishop Albert F. "Fritz" Mutti recognized Holston as the leading annual conference in giving to the United Methodist Global AIDS Fund. Holston has donated 10 percent of $3.5 million raised, said Mutti, campaign chair for the 20/20: Visioning an AIDS-Free World initiative.

Mental health highlighted the Austria Provisional Conference, where a new hospital for child and youth psychiatry of the United Methodist Diaconal Center Spattstrasse was opened. Superintendent Lothar Pöll reminded conference members that one of John Wesley's fundamental concerns was ministry with the poor, which evolved into a primary feature of Methodism.

Many conferences took time for delegates and visitors to get involved in hands-on mission. Collecting materials for and assembling relief-supply kits for the United Methodist Committee on Relief was a popular choice.

Holston Conference took that a step further by sending about 9,000 kits and buckets of food, school and health supplies to Liberia and Zimbabwe. They overwhelmed the two large ocean-carrier trailers they pack each year for Africa, necessitating, for the first time, a third trailer to accommodate the goods.

Arkansas Conference participants engaged in a variety of mission projects. Stop Hunger Now facilitated the conference's packaging of more than 40,000 meals, and three dozen participants learned how knitting hats, prayer shawls and more could provide much-needed ministries. Other mission efforts put attendees out in the community for graffiti removal, visits to assisted-living facilities and helping at food banks and clothes closets.

More than 150 volunteers from the Indiana Conference connected with the Indianapolis community by working on two Habitat for Humanity houses, installing a new playground at a United Methodist-related community center, repairing homes, preparing and packing meals for homeless residents and knitting caps for babies at a children's hospital.

United Methodists in the Desert Southwest collected $26,000 in gift cards for conference urban ministries. Iowa delegates gathered nearly 2,000 pairs of eyeglasses for Nigeria and 105 gallons of pull-tabs to support the Ronald McDonald House and packaged 30,000 meals to alleviate hunger in Rwanda.

Other conferences reached out through blood drives, prayer walks, food collections and packing potatoes for the Society of St. Andrew.

In Europe, specifically in the Czech Republic and Slovakia Annual Conference, The United Methodist Church is small. However, local churches make a difference wherever they are. "The United Methodist Church," said Peter Baur, "is also taking care of the underprivileged Roma. They have established ministries with mothers and children, students and drug addicts. In many cases, these ministries are only drops in the ocean - but they are crucial for the individual people served by the church."