Working in trios on a Saturday morning, the men and women decorated puzzle pieces to represent segments of The United Methodist Church: general agencies, annual (regional) conferences and more. Then they connected the pieces, and the puzzle's shape emerged: a heart.

God's love is at the center of "Lay Missionary Planting Network" training in the Oklahoma Indian Missionary Conference.

The goal of the six weekend sessions is to engage laypeople who will lead in establishing new United Methodist faith communities among Native Americans. The training is funded by a Path 1 grant through the United Methodist Board of Discipleship. With Path 1, church leaders are working with ethnic groups across the United States to plant churches.

This training program will end with a graduation service in February.

In the past five years, six faith fellowships have been launched and a new church was chartered in the annual conference, according to the Rev. David Wilson, Oklahoma Indian Missionary conference superintendent. "Lay Missionary Planting Network" is trying to extend that success, he said.

"We are not talking about buying land and building churches. We are talking about celebrating Jesus Christ where the people are already gathering. You can plant the seed," Julienne Judd told about 20 participants in the "United Methodism 101" class during the second training session in Oklahoma City.

Sunrise Ross (foreground), chairperson of the Northern District leadership team, and others study activities of the lay missionary planting sessions. A UMNS photo by Julienne Judd.

It began in a pow-wow

Judd was asked to develop a worship service one year for a pow-wow. Her effort became an annual ministry opportunity at the pow-wow grounds.

"Who would have thought that would become a community, where people waited to come together every morning to have worship?" she pondered aloud. Judd now pastors two conference churches in Wichita, Kan.

She noted people gather at ball fields before games and in sewing groups. "What things are you able to do in different communities that will draw people together?" she asked.

Trainees identified their own gifts and talents they valued in one another, all offered for the task of planting churches. Reliability was celebrated in one participant. "I may not know what I'm doing, but I'm going to be there," the young woman affirmed. 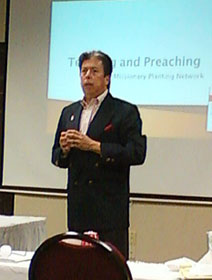 The Rev. David Wilson, superintendent of the Oklahoma Indian Missionary Conference, talks to the conference. A UMNS web-only photo by Tammy White.

Judd emphasized the value of the United Methodist connection for these lay missionaries.

Because they already are local-church members, the trainees have personal links to supportive, encouraging faith friends. Online Board of Discipleship resources, such as the "Faith We Sing" music and lectionary tools, are "at our fingertips," Judd said. "And if you aren't a computer person, find somebody at your local church who is," she told the group.

The Book of Discipline is her treasure trove, she said.

"The history, the rules, everything about who we are, polity and policy, is in this book."

She opened a copy and read John Wesley's words: "The Methodists think and let think."

"I love this, especially because we have some unique ways of worshipping in the OIMC," Judd said and described a prayer meeting of Native Americans. "Praise God for what we are as Methodists, being allowed to make an open door and say, 'This is what we are as people of faith.'"

One man voiced his thankfulness for the training opportunity. Although active in local-church life for 40 years, he said he "never learned anything" about the denomination until these sessions.

*McCray is editor of the Oklahoma United Methodist Contact.

Can United Methodists be politically active? The Social Principles offer guidance about the interaction of church and politics.
Social Concerns

Churches see census as part of their mission

United Methodists across the U.S. are helping hard-to-count people ‘come to their census.’ In doing so, they hope to strengthen their communities.
Mission and Ministry