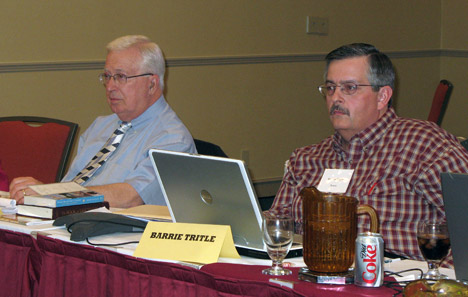 Bishop Neil Irons and the Rev. Barrie Tritle listen to discussion on a proposed 2008 General Conference resolution requesting four more years of study on the ordering of ministry within The United Methodist Church. A UMNS photo by Linda Green.

The commission charged with clarifying the ordering of ministry within The United Methodist Church will carry a resolution to the 2008 General Conference calling for four more years of study.

Created by the 2004 General Conference, the 25-member Ministry Study Commission sought to address the "continued ambiguity in the denomination's understanding of lay, licensed, and ordained ministry" and is to bring conclusions to the April 23–May 2, 2008, gathering in Fort Worth, Texas.

The commission's resolution will include items the commission has consensus and major agreement about and will test the proposals with the church, said Bishop Neil Irons, retired, who chaired the May 10–11 commission meeting in Nashville. The resolution calling for further study, if approved, will be followed by a study document suggesting adjustments to the church's current ministry.

The ordering of ministry underwent a major shift in 1996 when that General Conference created two distinct clergy orders deacons and elders. Previously, ordination to the order of deacon was a preparatory step to ordination as an elder.

"We have had major changes in the ways in which we order and understand our ministry in very recent years," said Irons, of Mechanicsburg, Pa. "So we are not rushing to a conclusion, but are offering some suggestions as to what we think may help us go the next step for ordering our ministries for the 21st century."

The commission has reached consensus on the process by which a candidate comes to ordination and full conference membership. It also agreed that the 1996 legislation making commissioning the first step toward ordination is problematic.

The panel says the process for entry into ordained ministry and full conference membership needs to be more timely, efficient, encouraging and motivating, as well as more relevant to age and life experience. Many candidates complain that the current process is too long and cumbersome, according to a group working with younger clergy and ministerial candidates.

The commission agrees that a candidate first will be ordained either as deacon or elder, and then must serve two years in residence under the supervision of the cabinet and the board of ordained ministry before being eligible for full conference membership. According to paragraphs 329 and 333 of the 2004 United Methodist Book of Discipline, deacons and elders in full connection are in a covenant relationship with all ordained individuals within the annual conference.

The commission also agrees that educational requirements for ordination need to be adjusted. It proposes ordaining candidates at the point of completing one-half of the educational requirements upon recommendation of the board of ordained ministry and approval by the clergy session. Their conference membership status then would be elder or deacon in probationary connection. Once the education requirement is completed, they would begin a residence program in the annual conference. Once completed, application could be made to the board of ordained ministry for full membership in the annual conference.

"That will be a dramatic change for us," Irons said.

"We feel that this is such an important issue that the whole church needs to look at it for a longer period of time with a degree of seriousness and receive feedback responses from all quarters of the church including the central conferences," Irons said, referring to those United Methodist conferences outside of the United States.

One concern is the language describing the probationary period before becoming a full member of the annual conference. For younger people, the term "probationary" is confusing because they associate it with civil courts and the U.S. system of prisons and paroles. The commission is exploring possible new language.

According to surveys and feedback from across the church, most elders in The United Methodist Church were ordained deacon before being ordained elder. "There is a strong desire on the part of many elders to go back to that process," Irons said. "It is a procedure that we did away with in 1996."

One question related to the 1996 ordering of ministry is whether the church should reintroduce sequential ordination for elders but keep ordination for deacons at only one step.

"We do have some ideas about things that ought to happen in the way in which we deal with entrance systems into our ministries. So, this study document will have some real specificity concerning some possible changes that the commission thinks may be useful to the ministry," Irons said.

Previous reports from the commission were framed in the historic form of Methodist conferences as "minutes of several conversations" and offered eight recommendations about the way the church identifies and credentials people for ordained ministry.

Irons said the church will continue to talk about the proposals "which may lead us to some clearer understanding of whether we need to take some radical steps or if we need to simply make some adjustments to our current system," Irons said.

"Conversation is always important and even strong negative opinions can sometimes help us find places where we are not ready yet to go or if we were on the wrong path. ...Those conversations will determine which of these is not a dead-end street."

The resolution will ask General Conference to authorize a commission to continue study of the issue either by extending the work of the current commission or creating a new one.

"We don't have a sense that what we have done is anywhere near a finished product. We think it is more important to look at an offering of thoughtful response from the commission and participate in trying to discern what God wants us to do with our ministry," Irons said.

Members of the current commission include representatives from segments of the church's ministry, including staff members from the United Methodist boards of Higher Education and Ministry and Discipleship and the Commission on Christian Unity and Interreligious Concerns.

The study of ministry: Where are we headed?

Board of Higher Education & Ministry