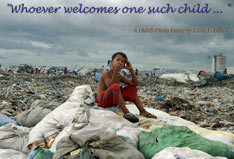 "Whoever welcomes one such child..." A UMNS Photo Essay by Kathy L. Gilbert.

God sent me to the Philippines twice this summer. I think there was a plan.

Manila, a city of about 11 million people, is jam-packed. Two-lane streets become three, four, five lanes or more as taxis, cars, buses, jeepneys, tricycles and miserable-looking horses pulling heavy carts full of passengers fight for a piece of the road.

As one of the most densely populated places on the planet, there is not enough room or jobs for everyone to scrape together a living to put food on the table every day or a roof over their heads every night.

Families lives in a cemetery where mothers put their infants down for a nap in a discarded laundry basket suspended between tomb stones. Men stand in waist-deep garbage praying for rain as they wash bits of plastic in hopes of selling it for a few pesos.

United Methodist Mary Johnston Hospital, established in 1906 to serve the poor, has not forgotten its mission. Doctors, nurses and administrators take food and medicine to their neighbors in one of the most dangerous communities in the city.

In all of these sad, bad places are United Methodists bringing Christ and hope. 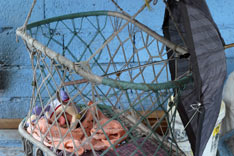 A makeshift baby cradle lies beside a tomb in Manila North Cemetery, where some of the city's poorest residents live.

The only place I visited both times was Smokey Mountain, a smoldering, stinking sea of garbage that stretches as far as the eye can see. Hundreds of the poorest of the poor call it home.

Smokey Mountain is one of the last places on earth you would want to go. But Sun Sook Kim, a United Methodist missionary, has spent 20 years in ministry to its residents. She plans to retire next year and, instead of going home to Korea, she will stay with the people she has come to love.

Kim described how visitors and church volunteers react when she takes them to Smokey Mountain. Many sit in their cars and cry, unable even to get out.

Families have built makeshift shacks on the edges of the trash pile. As one woman said, "When it rains outside, it rains inside," pointing to the home she has cobbled together with scavenged lumber and tin. 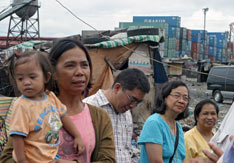 Julie Solimano, a resident of the Smokey Mountain landfill, holds her grandchild during a visit by the Rev. Johann Osias, Rebecca Asedillo and Elenita Laurente.

Garbage trucks constantly rumble in to dispose of the city's trash. Residents of Smokey Mountain eagerly rip open the bags hoping to find treasures — a bit of copper, glass, plastic or other recyclable goods. The lucky ones make about $2 a day.

Smokey Mountain was not on the agenda for my second trip. However, I had a gift to deliver. An outpouring of donations from my colleagues at United Methodist Communications sent me back to the garbage site with $500. Kim used the money to purchase 600 pairs of rubber slippers in every size for the children, women and men.

For many people, especially the children, the shoes were the first new ones they had owned.

Rebecca Asedillo, a staff executive with Global Ministries, was part of the team in July. A native of the Philippines, Asedillo said the experiences reminded her of Matthew 18:5: "Whoever welcomes one such child in my name welcomes me."

"That is at the very core of our ministry as Christians, I think," she said.

The city's first Smokey Mountain dump became an international embarrassment in the early 1980s and was closed in 1995 though a new site was opened just a mile away. Asedillo said the "New" Smokey Mountain reminded her that the problem remains the same. "How does one uproot poverty?" she asks. 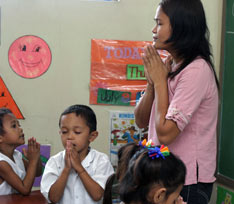 "The civil society and people's organizations are quite strong in the Philippines. They know that as the rich get richer, the poor gets poorer. The church cannot stop at charity. The church needs to advocate for social change."

Kim recalls that, when she first went to Smokey Mountain, she was angry and couldn't understand why people were forced to live in such conditions. She wanted to tend to their wounds and provide decent clothes to wear and nutritious food to eat.

God answered her anguished prayers with Matthew 6:30-34, in which Jesus reminds us that God is watching over his children: "Strive first for the kingdom of God and his righteousness, and all these things will be given to you as well."

Kim and other United Methodists are bringing hope to the poor in the Philippines. As she said, "I cannot offer them a kingdom here on earth, but I can show them the way to a kingdom in heaven."

*Gilbert is a United Methodist News Service news writer based in Nashville, Tenn. She compiled this series based on her trip to the Philippines in July 2007.