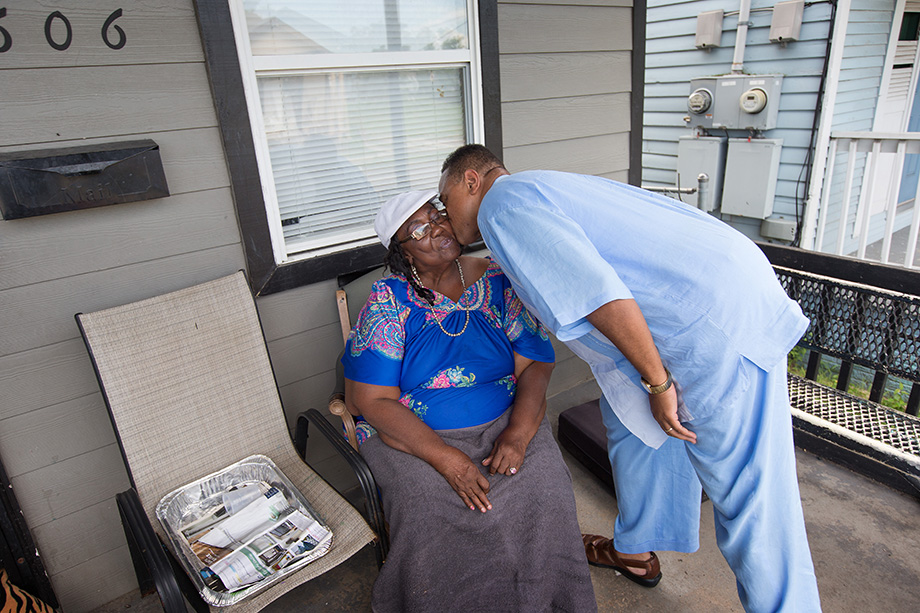 The Rev. Hadley Edwards kisses Estelle Julian during a visit to her home in New Orleans' 7th Ward. Edwards was going door to door to tell people about The "Spirit Church," a new United Methodist ministry he is starting there. Edwards says Julian will be his "first church member." Photo by Mike DuBose, UMNS.

The Rev. Hadley Edwards stands on a vacant lot in the 7th Ward and sees a church filled with people.

He waves to “Ms. Estelle” Julian, who is sitting on her front porch across the street. “She’s my first church member,” he said.

Julian is looking forward to the new ministry.

“I need to be in some church, some way. I have 13 grandkids, eight children,” she said, fanning herself with one of Edwards’ red and yellow “push cards,” his version of campaign cards.

One of 17 wards in the city, the 7th Ward hasn’t gotten as much publicity as one of its nearby neighbors, the 9th Ward. But both are low-income neighborhoods wrecked by Hurricane Katrina.

In a bold move, the Louisiana United Methodist Conference appointed Edwards to the entire ward instead of an existing church or structure. And he is just the kind of pastor who can handle that.

“My assignment so far is to plant a new faith community. This is the start of that community,” he said, waving his arms around the vacant lot.

The Louisiana Conference owns the empty corner lot that was once home to a two-story house. The property was a surprise to the conference, since they only learned they owned it when the city sent a warning notice stating they needed to clean up their property or face a fine.