Some churches toll bells as names are read. In other congregations, members light candles to remember the saints who have died during the past year. Often, family members display framed photos of their loved ones.

But at First United Methodist Church in Franklin, Tenn., All Saints Day is one of celebration as the children's choirs lead a procession of song and colorful banners.

As the congregation and choirs join in "I Sing a Song of the Saints of God," white-robed children — carrying banners in liturgical colors of purple, red, green and white - process through the sanctuary and into the choir loft.

The purple banner adorned with brightly hued rainbows, hearts and a cross remembers children's choir member Amanda Young, who died of leukemia at age 6 in 2002. Thinking of her daughter's banner, Beth Young wipes a tear.

"Amanda was vivacious, angelic and always wanting to do for others," the proud mother said. "She was very spiritual — 6 going on 26." 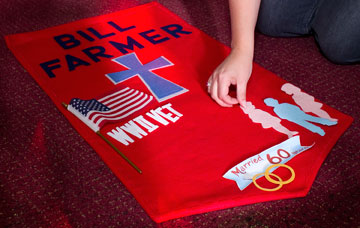 The banners represent the lives of many other cherished "saints" remembered by the church on this special day.

The congregation "continues to embrace our girls," said Mamie Jeter, whose 19-year-old daughter Katie died in auto accident in 2004.

Katie's banner features a bookmark from a mission trip to Mexico, an open Bible, cheerleading pom-poms, tiny pink flip-flops and a pink rose to represent her sorority. In her last e-mail to her mom, Katie wrote, "I love my life," and that phrase, too, appears on her banner.

For Katie, Mamie Jeter said, "it was not all about me." Worshipers are reminded during the service that they are part of a larger communion of saints.

That's one of the main lessons of the church's All Saints service.

As the children recess, adults gather the banners and hang them in the balcony so that when the congregation leaves, they see the host of banners of their saints surrounding them.

"I have heard many say this is the most meaningful service of the entire church year," said Sarah McGinley, who has directed preschool and kindergarten choirs at the church since 1982. 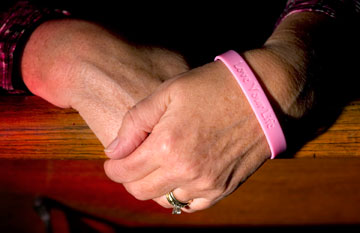 Mamie Jeter wears a wristband proclaiming "Love Your Life," in honor of her daughter Katie, who died in an automobile accident.

When the banner tradition began in the mid-1990s, choir children and their parents met on a Sunday afternoon and cut fabric, drew symbols that represented the honoree's life and assembled simple banners. Later, a mother offered to make double-sided banners with decorative stitching on the edges. She has provided about 20 to 30 a year for the past six or seven years.

Although children and their parents still make some of the banners, other talented people in the church have asked through the years to make a banner for someone they loved. Some families make their own.

On her mother's banner, McGinley said, "we had the cross and flame in the UMW format, a flower arrangement, sewing things, cooking things and a little clothesline at the bottom with little shirts and dresses from clothes she actually made my children representing her three children and 13 grandchildren."

Some years, they have opened the banner making to include anyone in a choir member's family who has died in the past so that every child could carry a banner. They even made some for other "saints" such as St. Francis of Assisi, Charles Wesley and John Wesley.

"We surround the congregation with the banners," McGinley said. "On some occasions, we come in led by a bell frame that has bells representing all those who have died in the past year. Sometimes candles are lit as each name is read during the service, but we always process in for the call to worship or opening hymn with the banners."

The banners are returned to family members after the service, and some have even had them framed. "They are so treasured," McGinley said, "and relationships are built within our community of faith."

During choir time each week starting in September, McGinley shows banners from the past and talks about All Saints Day. She explains how they are going to remember all those in the congregation who have joined the company of saints in heaven. Even the preschoolers learn all three verses of "I Sing a Song of the Saints of God."

"Many children need little rehearsal because they have sung it every year they have been in choir beginning when they were 3 years old," McGinley said. They discuss saints such as St. Luke, St. Joan of Arc, St. Margaret and St. Ignatius, and during rehearsals dress up like some of the saints mentioned in the song. 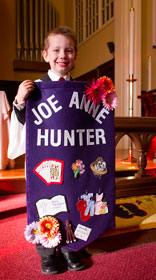 'So great a cloud of witnesses'

Ann Hill has lost track of the number of banners she has made over the years. She was putting finishing touches on a crimson banner honoring the late Bill Farmer, a close friend's father. The banner offers a capsule view of his life: a U.S. flag for his World War II military service, wedding rings for his marriage of 60 years, three silhouettes for his three children, and a cross for his commitment to his faith.

Teaching children and the congregation about the "great cloud of witnesses" of which the apostle Paul wrote in Hebrews is important to McGinley.

"When we engage children," she said, "we provide ways — little glimpses — for them to see this is what the faith is about.

"I love the words (in the song) that say, 'You can meet them in school, on the street, in the store, in church, by the sea, in the house next door,'" she added.

First published October 29, 2010. First United Methodist Church in Franklin, Tenn., continues this tradition of honoring those saints who have died during the year.

All Saints Day worship resources from United Methodist Board of Discipleship

Do United Methodists believe in saints?