An 85-year-old woman rode in an ox-drawn cart, while a 95-year-old man walked for three hours to reach the Dindi United Methodist Clinic for the rare opportunity to see a doctor or get other health services.

Janet Mutsengi, 85, of Sose village, has chronic hypertension and arthritis, which coupled with her age makes walking difficult.

“I have had more than a year struggling from home without seeing a doctor and this program is a miracle for me. I was examined by a doctor today!” said Mutsengi, who rode in the ox-drawn Scotch cart 10 kilometers (about 6 miles) to reach the clinic.

Ox-drawn carts and wheelbarrows are the most common modes of transport used to ferry the sick to clinics in Zimbabwe’s remote rural areas, since public transportation is hard to find or too expensive for the villagers.

Kwedze Nyabani, 95, of Gachira village was ecstatic after receiving a set of reading glasses at the end of his three-hour trek on foot.

The United Methodist Church, through its Murewa Uzumba Maramba Pfungwe District, collaborated with the business community and locals during an outreach program aimed at drawing people to Dindi Clinic’s health services. The clinic is in the midst of an upgrade.

“We decided to partner with corporations and local community after having been touched by the plight of traveling long distances to Mutawatawa hospital,” said the Rev. Henry Chareka, superintendent of the district. Mutawatawa, the closest hospital, is 30 kilometers (about 19 miles) away from the clinic.

The outreach saw partners travelling the 200 kilometers (124 miles) from Harare to Dindi to help the United Methodist district’s health coordination team and staff from United Methodist Nyadire Mission Hospital. The business partners provided transportation for their health workers in addition to providing free medicine and supplies. 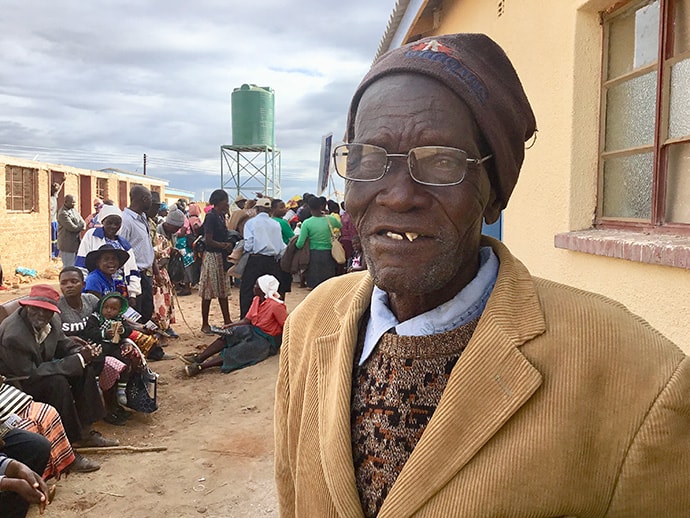 The district health desk, coordinated by John Chinyerere and managed by the District Health Committee plus doctors from the Mureswa district, attended to 140 patients with various ailments.

Over 500 people thronged the mission center and patiently waited in winding queues for their next turn to partake of the “heavenly visit.” Chief Harrison Fambira of Chitsungo, the traditional leader of the area, welcomed the event. He expressed his hope that the doctors would “come back soon.”

Chareka assured the community that the church will continue to plan more medical outreach events. “This is not an end but a continuation of more and greater partnership support for the Dindi community. …We have come a long way, and we will not stop now!”

The health facility currently operates under the supervision of Nyadire Mission Hospital, and doctors from the hospital travel to the clinic to see patients. However, community leaders during a tour of Dindi Clinic asked the church to assign a doctor to the clinic.

Among those community leaders urging the church to assign a doctor was Tichawona Karumazondo, Member of Parliament for the Maramba Pfungwe Constituency.

“The church has really become practical in continuously upgrading Dindi clinic,” he said.

Belinda Mashoko, the sister-in-charge at Dindi Clinic, agreed that a full-time doctor was needed but added that she appreciated the work and support given to the clinic by Nyadire Mission Hospital.

“Nyadire Mission hospital medical team has always been forthcoming in their supervision,” she said.

The Rev. Vienna Mutezo, the Zimbabwe West connectional ministries director and deputy administrative assistant to Bishop Eben Nhiwatiwa, called on the community to be patient while the church works on upgrading the clinic into a state-of-the-art facility.

She said having a resident doctor would have to be a future development when the upgrade is complete.

The clinic upgrade is being funded through Imagine No Malaria, which provided $276,045.64 U.S. Zimbabwe Episcopal Area’s Health Board and the Global Health Unit of the United Methodist Board of Global Ministries are overseeing the upgrade.

Donate to Abundant Health Advance #3021770 or Imagine No Malaria Advance #3021190.
Learn more or donate to the Nyadire Connection.
The community is contributing building materials in the spirit of chabadza, the practice of working with neighbors. Bricks, river sand, pit sand and concrete stones are ferried to the site by ox-drawn carts.

The goal of the project is increasing access to quality services, increasing the engagement of individuals and communities in the management of their own health, and improving the management and performance of the health system, said Hannah Mafunda, the Zimbabwe Episcopal Area Health Coordinator. Mafunda is managing the rebuilding of the clinic.

The clinic has seen a major facelift that includes laundry rooms, expansion of the outpatient department, and progress on the male and female wards, as well as completion of three staff houses.

The Nyadire Mission Hospital is administratively responsible for six rural clinics, including Dindi. The Nyadire Connection, a group of United Methodist who support the mission, began raising funds in 2013 to rebuild the clinics and three are complete — Chikwizo, Nyahuku and Dendera. Once the Dindi rebuild is done, the connection hopes to start on the Mashambanka clinic, said Drew Harvey of the nonprofit Nyadire Connection.

While Karumazondo, the member of parliament, was appreciative of improvements at Dindi clinic, he bemoaned the lack of an ambulance in the area to ferry patients from Dindi to referral health centers. He sees the lack as worsening the plight of the villagers in the malaria-prone area.

“We have 20 clinics (including Dindi) within a radius of 300 kilometers (186 miles) and none of these have an ambulance,” he added.

Chief Fambira agreed. “Yes, while we celebrate the development of this clinic, we still have cases of villagers dying on their way to Mutawatawa Hospital because we have no ambulance. We need an ambulance now!”

Sister Mashoko noted there have been delays in getting patients to referral centers. “We currently hire public transporters, which in most instances are expensive, about $200 Zimbabwe dollars. To make matters worse, the pirate taxi or commuter drivers in most cases do not have that urgency we need to get patients to the hospital.”

Mutezo, the connectional ministries director, said the church will continue its work. “We are a connectional church, and we shall continue to engage the wider church community and friends of Dindi to come to the rescue where possible. It is our prayer that with God all things are made possible,” Mutezo said.

In addition to the health services provided, Econet, a telecommunications company, gave out free cell phone cards and registered the villagers on Ecocash, a mobile money program. This program is expected to help people avoid the need to travel about 100 kilometers (62 miles) to get to the bank.

The outreach organized by the church provided an opportunity for community members to meet agricultural seed manufacturers, too. The seed producers SEEDCO and DAKLAB gave the villagers farming tips for their area. Pfungwe is found within Zimbabwe’s Ecological Regions IV and V where most farmers rarely produce above their subsistence levels owing to poor soil and low rainfall patterns.

“We do not just minister to the spirit but to the whole person,” Mutezo said.

A United Methodist church’s campaign to create equitable access to COVID-19 vaccines among poor countries has raised nearly half a million dollars, but challenges remain, so the campaign continues.
Mission and Ministry

Faith communities can respond to substance-use epidemic with hope

September is Recovery Awareness Month. Pastor and advocate Matt Johnson encourages churches and faith communities to engage with those struggling with substance use disorder.