Eleven-year old Stephen Handy was at home, but his mother attended the ceremony that celebrated the merger of what then were called Conference A and Conference B. The ceremony came after The United Methodist Church's 1968 uniting conference that formally disbanded the racially constituted Central Jurisdiction.

Stephen's father, the Rev. W.T. Handy, was director of personnel services at the United Methodist Publishing House and chair of the Louisiana Conference Board of Ministry for Conference B. He was the first African-American executive for the publishing agency in Nashville, Tenn.

The Rev. Benjamin Oliphint was pastor of University United Methodist Church in Baton Rouge for Conference A and a member of the board of directors of the Methodist Board of Education.

The two men represented clergy of the two annual conferences during the worship service at Centenary College in Shreveport, La. 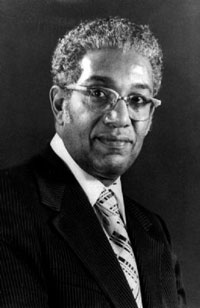 Nine years later, Mary Brooke and Stephen were in the congregation when their fathers were consecrated bishops during the 1980 session of the South Central Jurisdictional Conference. On that occasion, W.T. Handy, 56, was a superintendent in the Louisiana Conference, and Oliphint, 56, had transferred to the North Texas Conference, where he served First United Methodist Church in Dallas.

Oliphint led United Methodists in the denomination's Houston, Kansas and Louisiana areas during the next 12 years. He was instrumental in helping to start Africa University, the United Methodist-related school in Zimbabwe. After retiring from the active episcopacy in 1992, Oliphint co-chaired a task group that developed the Methodist Global Education Fund for Leadership Development. He died in 2007.

Handy served the Missouri Area and returned to the Publishing House, where he served as chaplain after his 1992 retirement. On behalf of the Council of Bishops, Handy helped develop "In Defense of Creation," a churchwide initiative on nuclear disarmament, launched in 1986. He served on a committee that developed a new United Methodist Hymnal, released in 1989. He died in 1998.

The adult children of the two bishops reunited during a March meeting of the Connectional Table in Nashville.

Mary Brooke Oliphint Casad is the executive secretary of the Connectional Table. The Rev. Stephen Handy, pastor of 125-year-old McKendree United Methodist Church in downtown Nashville, was invited to preach at a worship service for the 60-member coordinating body and its three staff members, including Casad.

During the service, Handy, the first African-American pastor at McKendree, told how church attendance had declined from the 1980s to the early 2000s. For many years, 95 percent of the 200-member congregation was upper-middle-class Anglo-American. When Handy became pastor in 2009, demographics of the faith community began to change. In 2012, 65 percent are Anglo, 30 percent are African American and 5 percent are from other ethnic groups.

"We are a multigenerational and multicultural congregation on purpose," said Handy. "We have partnered with the Metropolitan Homelessness Commission and with the Veterans Administration to help eliminate homelessness in downtown Nashville where there are 4,000 displaced people every night."

After the service, Casad and Handy hugged one another and recalled the shared histories.

"Hearing Stephen preach was incredibly moving for me as I recalled our families' long friendship," said Casad. "I remembered the 1971 merger celebration when our fathers embraced and rejoiced at the two conferences becoming one. I remembered serving on the Hymnal Revision Committee with Bishop Handy. This long friendship continues with the common goal of carrying on our fathers' legacies of service to the church."

"God continues to offer an invitation for all people to form the beloved community where difference/diversity is embraced and celebrated, grace is extended, love is shared, and ultimately, God is glorified," said Handy. "My prayer is for The United Methodist Church to live deeper and more intentional into being united as part of the body of Jesus Christ."

*Peck is a retired clergy member of the New York Annual Conference. He worked with Bishop Handy while both were employees of the United Methodist Publishing House.