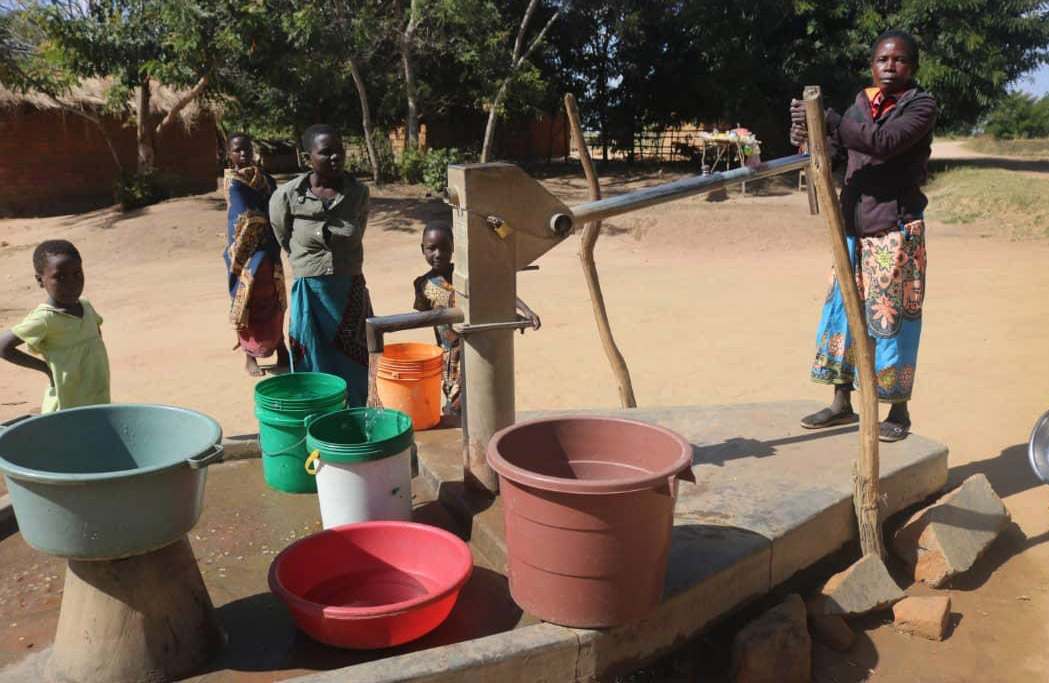 Veronika Mwale (right) pumps water from a borehole in Thako village in Mchinji, Malawai. The borehole, which supplies water for three villages, was built through a partnership between Ankeny United Methodist Church in Ankeny, Iowa, and the Malawi Provisional Conference. Photo by Francis Nkhoma, UM News.
Hundreds of women and girls in communities in Malawi and Zimbabwe will no longer have to wake up as early as 3 a.m. each day and walk miles to get in line for water, thanks to efforts by The United Methodist Church and its global partnerships.

Through WASH (water, sanitation and hygiene) training and the drilling of boreholes, more people in remote communities have access to clean water, which has been especially important during the COVID-19 pandemic.

“(The boreholes were drilled) where church leadership decided the communities suffered most and (where) women and young girls have been victims of the scarcity of clean water,” said Mhone, noting that in many places the use of unprotected water from open wells or rivers had been regarded as the norm.

He said the training provided by Akeny First led to the villagers setting up wash areas outside the toilets in these communities to help reduce water-borne diseases.

Frank Galeta, who lives in the Mitundu village in Lilongwe, is grateful for the improvements.

“After the training, we are moving toward a hygienic society and thanks to Ankeny First United Methodist Church for funding this program for our better and clean community,” he said.

Another borehole was built in Thako village in Mchinji Township, serving 500 people in three villages.

“I no longer (have to) wake up early in the morning at 3 a.m. to fetch water. People in the community are able to cook decent meals with clean water and this has reduced cases of water-borne diseases,” said Veronika Mwale, a member of the community.

The United Methodist Church of the Resurrection in Leawood, Kansas, helped fund the drilling of a borehole in the Phalombe District in Malawi earlier this year.

Chief Mfumu Mthunga said before the borehole, women would often have to compete for water at unprotected wells, noting that the community shared the water source with animals.

The Kansas church also helped fix a borehole in the Chitimba village in the Karonga District, which serves more than 150 people. Built in 2014, the borehole had not been working for five months, said Maurice Solola, health assistant for the Malawi Provisional Conference. He said with the church’s help, they were able to replace some worn-out parts.

The coronavirus pandemic has reinforced the need for clean water and good hygiene, said Mhone.

“The drilling of the boreholes in our rural communities coupled with the WASH training has further helped in our health delivery services in our communities in this season of COVID-19,” Mhone said. “Washing of hands frequently is critical and yet such is not possible if there is no water in the community.”

In Zimbabwe, through the Chabadza Community Development program — a partnership between United Methodists in Norway and the Zimbabwe Episcopal Area — 15 boreholes have been drilled since 2012. The partnership program pairs local communities in Zimbabwe with Norwegian churches.

The Rev. Musafare Mususa, director of the program, said they recently drilled a borehole in the Sengejira village in Buhera, Manicaland, at the cost of $9,711.

“It is expected to benefit more than 2,400 community members who have been surviving in extreme difficulty in an area where water sources are very few,” Mususa said.

He said the lack of clean water makes life challenging for villagers.

“It is extremely hard for women and girls to lead safe, productive, healthy lives without safe drinking water, adequate sanitization and hygiene facilities at home and in places of work and education. Borehole drilling has emancipated some community members through irrigation practices and produced nutritious food for the families, facilitating individual empowerment, especially in rural areas,” Mususa said.

In 2012, after a cholera outbreak, the program began incorporating WASH projects into its activities, providing comprehensive health services to the community and dealing with primary health care concerns.

To date, 22 villages have benefited from the WASH projects in the Mutambara area, 11 boreholes have been drilled and 26 toilets have been constructed together with the communities, Forster said. The Chabadza program also has built irrigation water systems at Sengejira and in the Lupote village in Hwange in the Bulawayo Midlands District.

In December, a $25,000 grant from The Nyadire Connection helped install a solar power system to improve the water supply at Nyadire United Methodist Church Mission in the Mutoko District. The Nyadire Connection is an all-volunteer group founded by individuals from a network of United Methodist churches in Pittsburgh that helps support the mission.

Because electricity at Nyadire was frequently not available, the water system pumps could not operate and the mission was frequently out of water, said Drew Harvey, the group’s chairperson.

“Using sunlight, two large pumps now pump water into the reservoirs and provide most of the water needed by Nyadire,” he said. 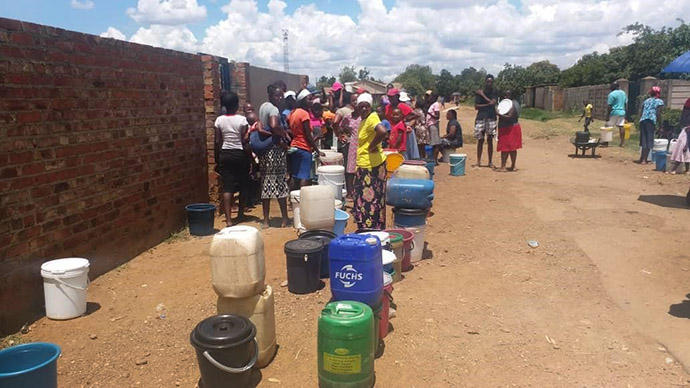 Community members wait in line to fetch water from the borehole at Highglen United Methodist Church in the suburbs of Harare, Zimbabwe. Photo by Chenayi Kumterera, UM News.

“I am quite glad and overwhelmed seeing a happy, urban community benefiting from two 5,000-liter tanks during this COVID-19 pandemic,” he said, adding that they would like to buy a larger tank if they can raise the funds.

He said he and his wife, Carol, along with another United Methodist couple, David and Susan Hickes, raised the money for the project.

The Rev. Remember Masamba, pastor in charge at Highglen Circuit, said people are restricted from fetching water before 10 a.m. so that the tank won’t be exhausted.

“The borehole is lessening water problems to the two community suburbs of Glenview and Budiriro and there is great appreciation from the general public to the church,” said Gally Kagande, Highglen Circuit lay leader.

The Rev. Alan Masimba Gurupira, administrative assistant to Bishop Eben K. Nhiwatiwa, said these partnerships are important as they extend Christ's ministry to the needy.

Continued support is necessary, he said, especially more solar-powered pump units for the boreholes already drilled and at the Zimbabwe West Conference head offices in Harare.

"Access to clean water translates to responding to the health needs of our communities,” he said, noting that it has been especially important during the country’s lockdown.

Nkhoma and Kumuterera are communicators in Malawi and Zimbabwe, respectively.